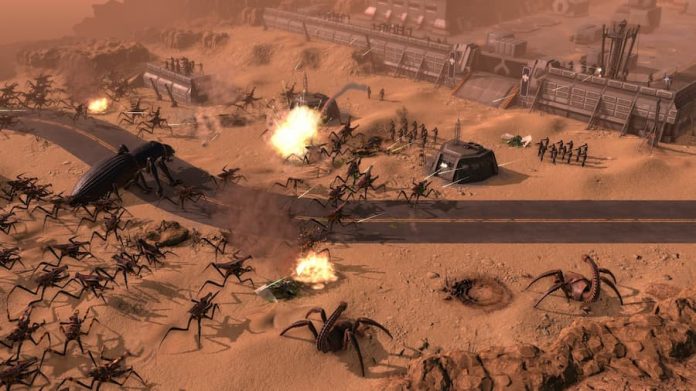 Need some help getting to grips with Starship Troopers: Terran Command? Let us help with five bug-busting tips.

In Starship Troopers: Terran Command, your main aim is to obliterate the Arachnids from the map. But with their immense numbers, grotesque mandibles and giant plasma-throwing butts, this may be harder than you think. But worry not: we’ve got five tips to help you bust those bugs into oblivion.

In Terran Command‘s first mission, you are told to use your terrain. Take that advice! No infantry unit should be in the way of another, otherwise they can’t get a clear line of target. And so, make use of elevation, choke points and tunnels to suit the units you wield.

There’s more to the map than first meets the eye, too. Firstly, there are buildings that provide hard material to build turrets on that also provide elevated cover for your troops. And second, you can’t miss those notorious red barrels placed around the map. As you can probably guess, these blow up! It should be noted that you have to target them manually to cause an explosion.

Starship Troopers: Terran Command is reminiscent of old RTS games and one thing it shares in common with them is the use of arrow keys to move around the map. While this may suit some, it certainly isn’t for all. If you’re used to WASD, it can take some getting used to. Luckily, heading into the config menu will reveal the option to rebind your keys. Be aware though, that some of WASD are used as shortcuts for unit abilities so you’ll need to remap those too.

3. Make use of the tab key to cycle through units

One thing that can be difficult in any RTS game is taking control of the multitude of units you have on screen at any one point. Especially if you have groups of units dotted all over the gaff doing different roles. One easy way to select through units is the tab key (unless you have rebound). This cycles through your units. You can also bind a key to cycle the opposite way through units. Either way, being able to quickly switch between units in Starship Troopers: Terran Command may give you that edge you need.

4. Wait on your dropships before you replenish troops

In Starship Troopers: Terran Command, you don’t use resources up and, aside from certain story missions, you can always replenish your troops. One thing you should be wary of, however, is that the limiting factor is your dropships. If you are losing units fast, you may realise that you have to wait for dropships; they take time to become available again. So be careful, and don’t try to replenish your troops too quickly

5. Be Aware of E-Pulse Units’ Cooldown

E-pulse units are strong infantry-style units that really chew through hardened enemies, although they have a shorter range than their contemporaries. They also have a magnificently powerful [W] ability called Rifle Overcharge that makes them fire more rapidly, with better armour piercing, for a select amount of time.

However: they have a huge cooldown, and once you’ve used their attack they are unable to fire at all for an extensive period afterwards. This doesn’t render the ability completely useless; when fighting a significant horde of Arachnids it’s worth firing them up. But we wouldn’t recommend using that ability on all your troops at the same time. It’s a recipe for disaster.

Can You Group Units in Starship Troopers: Terran Command? 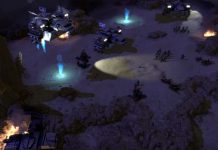 How to Build Turrets in Starship Troopers: Terran Command

How to Move and Attack in Starship Troopers: Terran Command

How to Clear a Hive in Starship Troopers: Terran Command