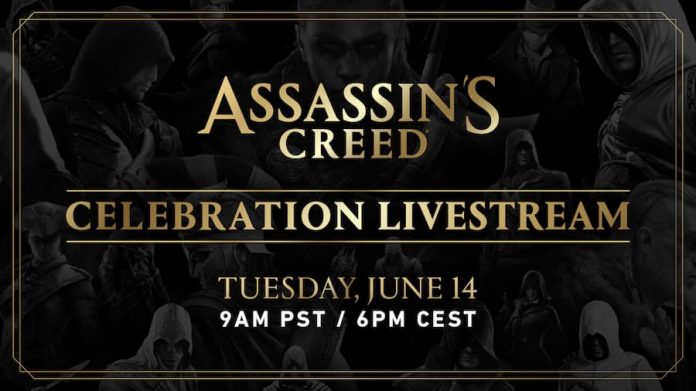 Granted, it’s not the most imaginative title but we’re still eager to see what Ubisoft has in store when they go live later today. We’re also curious as to whether the Celebration Livestream will acknowledge any of the stealth murder-em-up’s missteps, such as the horribly, hilariously bugged Assassin’s Creed Unity.

We do know that they’ll be taking a retrospective look at the franchise as a whole. Aside from spawning nearly thirty games, there’s an Assassin’s Creed movie, multiple comics and books and enough merchandise to sink a pirate ship. On top of that there’ve been concerts – we expect the livestream to feature a look at the series’ soundtrack – and more.

We love Assassin’s Creed  (though Ubisoft’s reputation as a company has been less than stellar) and there’s certainly still life in the series. That said, we’d love to see Ubisoft admit the series’ mythology has got out of hand and abandon all the animus nonsense, or at least bring it a much-needed conclusion. Yeah, that’s not going to happen.

You can catch the Assassin’s Creed Celebration Livestream today, June 14th, at 9AM PST / 6PM CEST / 5PM GMT.  You can watch it via YouTube or Twitch, or just come back to this article and click on the above video.