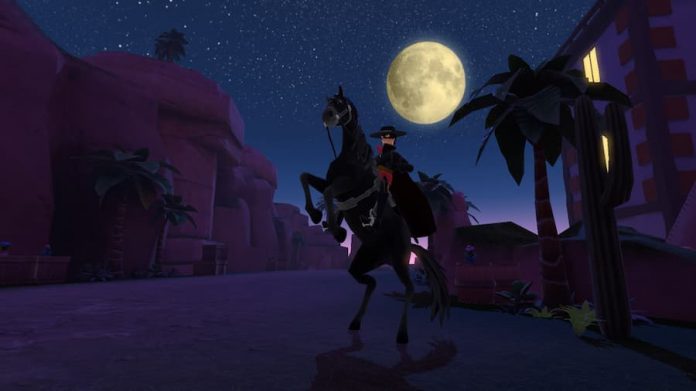 We’re not entirely sure why Zorro The Chronicles exists. And that’s a pretty strong statement to make.

After all, it’s based on a cartoon series that aired for one season, six years ago. Sure, Zorro as a character is bigger and more widely known than that, but as a franchise, is it still relevant? What children are waxing lyrical about Zorro in this, the year 2022? Ultimately, that wouldn’t really matter if Zorro The Chronicles was a good game. But it’s not. It’s really not.

Starting the first level, you’re shown the ropes. With two characters to choose between, Diego or Ines, both share a moveset but feel slightly different to control. Diego’s attacks feel a little swifter, and he has more energy. Ines, on the other hand, has more health so feels sturdier and hardier. As you play, you’ll unlock new attacks for them; a lasso-stun, a heavy hammer attack. It shows some promise.

Typically, a level tasks you with reaching a goal. Perhaps you’ll have to find a key to unlock a building, where you’ll find someone who needs rescuing. Or maybe you’ll have to search out a particular enemy. Whatever the goal is, the end result is more or less the same: move through an environment, defeating plenty of enemies as you go. 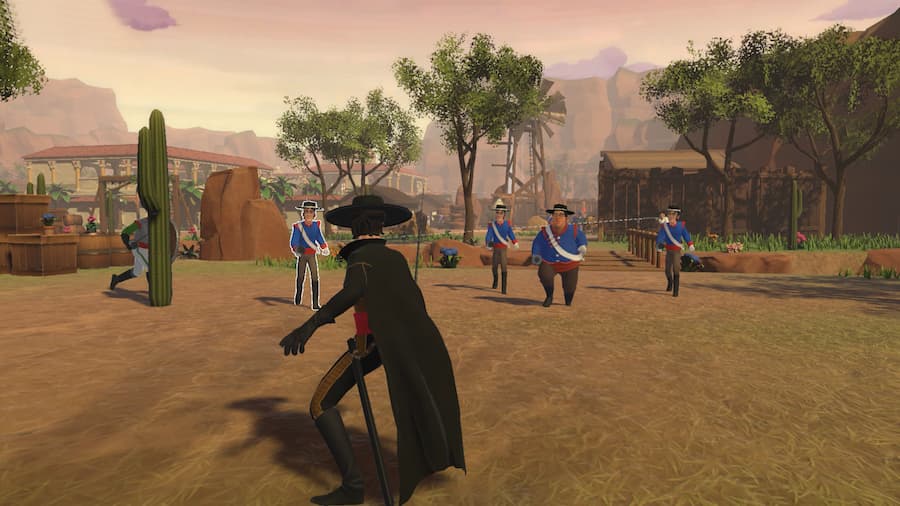 The combat system feels appropriated from the Batman Arkham series; a watered-down version of responding to enemy tells and reacting at the right moment. It’s much simpler of course, and working your way through a crowd of a dozen guards all out to get you takes no time at all. It’s enjoyable enough, swinging your blade through them and enjoying some of the more humorous animations; use your ‘special’ attack and see a ‘Z’ be carved into your enemy’s underpants. Or send them flying into a water fountain, stunned and unable to get back up.

You can also take a stealth approach if you like, jumping down on enemies from rooftops or lamp posts, or sneaking up on them from behind. But when hand-to-hand combat is so easy, there’s no real benefit to being sneaky. However, certain areas of levels may offer you a challenge, tasking you with taking out enemies in a particular way. With extra coins up for grabs – which you’ll use to unlock new abilities and upgrades to health and energy – they’re worth completing, so these will largely dictate how you approach certain situations.

The trouble is… well, just about everything else. With action being spread over more than a dozen levels, Zorro The Chronicles never really changes. Its action is incredibly repetitive, and chances are you’re going to have given up long before you reach the end. While it doesn’t look terrible, its visuals are rather basic and flat, with no environments feeling particularly inspiring. There are some side activities to complete, like finding a number of posters hidden around each level, but there’s little reason to find them, and scouring each level is rather tedious.

Perhaps the worst offender in Zorro The Chronicles, however, is its camera. It constantly feels like it’s working against you, and trying to get a good view of what lies ahead or to either side of you is tricky at best. Even just in standard motion, its viewpoint over your character is very awkward, getting too close up in combat and constantly restricting your view.

All in all, then, Zorro The Chronicles is hard to recommend. There are few, if any, redeeming features here, and anything that’s partially enjoyable – like the simple combat with its humorous finishing animations – is ruined by a dreadful camera. There are far better family-friendly adventure games out there and so, even if you or your kids have a love for Zorro, you should spend your money elsewhere.

This review of Zorro The Chronicles is based on the PS5 version of the game, via a code provided by the publisher. It’s available on PS4, PS5, Xbox One, Xbox Series X/S, Switch and PC.