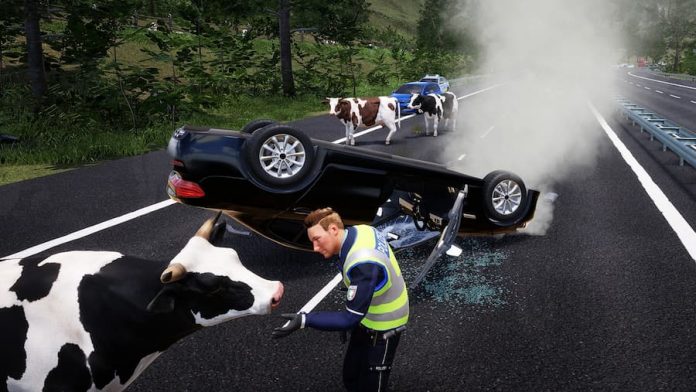 You can choose to play with either a male or female form, but whatever you choose, your character looks like a doll on a hot summer’s day. Their faces are plasticky and shiny, like a Madame Tussaud’s waxwork that’s on the verge of melting. Then you begin playing, and things only get worse.

But first, let’s back things up a little. Autobahn Police Simulator 3, on paper, should be an entertaining game. It lets you step into the shoes of a police officer, recently returning to work after being involved in an accident. Now they’re determined to take down the street racing group that caused their crash, but those up above have put a spanner in the works. You’re not experienced enough, apparently, and so you need to get out on the job, improve your rank, and then you might just be allowed to have a crack at it.

Working with your partner, how you progress is largely up to you. You can go out on patrol if you want, pulling over strangers to check their paperwork is in order and their car meets regulations. If the situation calls for it, you can even demand a breathalyser test and check to see if the driver is under the influence of drugs. Then, with everything considered, it’s up to you to determine if a fine is necessary, or even perhaps a trip to the station. 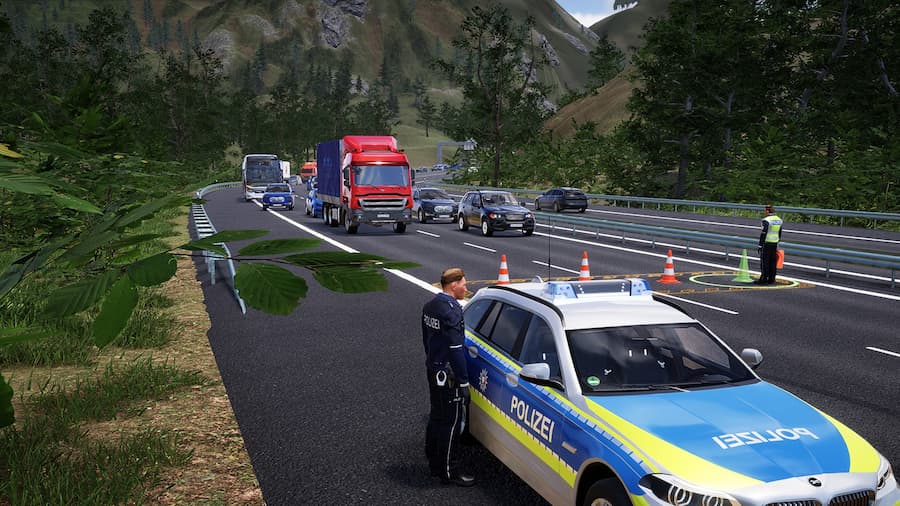 Other tasks for you to get involved with in Autobahn Police Simulator 3 include attending accidents and dealing with them in an effective manner – taking pictures, questioning those involved and the like – as well as car chases, setting up police blockades, and more. Even shootouts aren’t out of the question. There’s so much here to work with and, for someone interested in trying to uphold the law in a digital game world, get excited about. But unfortunately, the entire experience of playing the game is just horrible.

As soon as you take control of your character, starting your police career at your HQ, you discover that the camera when you’re on-foot is nauseating. It jitters around, making the game unpleasant to watch. Your character is awkward to move with any degree of accuracy, too. Things pick up a little when you get in your car, as the camera becomes more stable at least. But then you realise the handling is awful. For a game where you do so much driving, it’s unforgivable.

You unearth more problems when you start driving as well, like the fact that there are invisible walls at the side of the road. Also, streets signs, no matter how puny they are, are immovable objects, and so is pretty much everything else. It’s also silly how you’re meant to be the law, but no one really seems to care when you drive like an absolute madman. You can drive through red lights, on the wrong side of the road, and crash, and no one will raise an eyelid. Not even your partner who’s sat beside you.

Autobahn Police Simulator 3 is ugly as hell, too. Beyond its character models, the draw distance is terrible and textures are low quality. We actually forgot we were playing the PS5 version for review, thoroughly convinced that the long loading times and horrendous visual presentation were the result of playing a PS4 game even unoptimized for PS4 Pro. Even worse, performance is criminal, with stutters here, there and everywhere. Along with everything else, some may consider Autobahn Police Simulator 3 unplayable.

There you have it: Autobahn Police Simulator 3 is the worst game we’ve played in some time. It’s definitely the worst PS5 game we’ve ever played, that’s for sure. It’s not even fun in a “this game’s so bad it’s fun” kind of way; the technical issues suck out any joy that might have otherwise been found in the premise. And so, for the love of god, don’t buy it. Just don’t. Find your crime-fighting thrills elsewhere.

This review of Autobahn Police Simulator 3 is based on the PS5 version, with a code provided by the game’s publisher. It’s available on PS4, PS5, Xbox One, Xbox Series X/S and PC.