There’s no escaping zombies, even on Nintendo Switch.

While some people groan at the mere mention of the walking dead. Others just can’t get enough of them. Especially in the world of video games. And so, if you’re eager to engage in some undead escapades and own a Switch, you might be wondering: what are the best zombies games on the format?

The good news is that there are plenty to keep you entertained. Perhaps not as many as there are on other formats, but enough nonetheless. And to make it easy for you, we’ve assembled a list of them. So, read on and discover the best zombie games on Switch. Each and every one of these will fill you with joy, though perhaps in a different way. 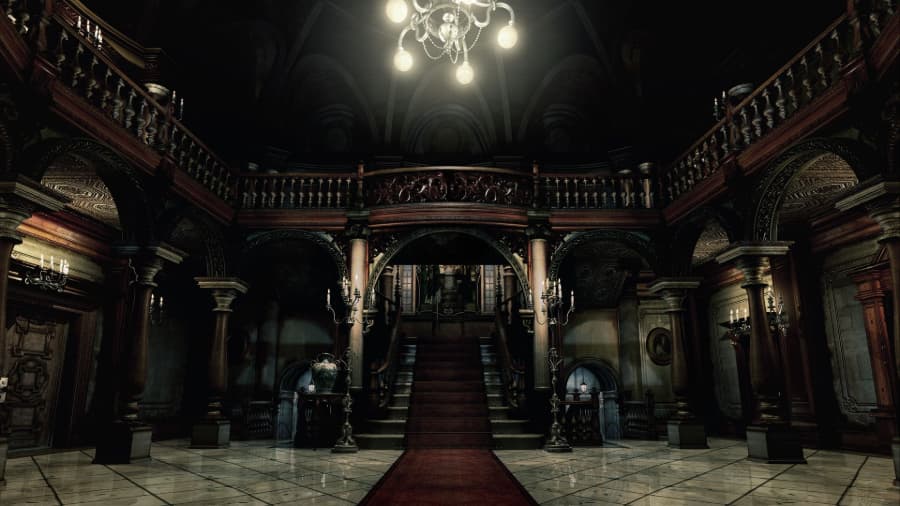 The original and quite possibly still the best. Well, kind of. This remake of the very first Resident Evil remains brilliant to this day, and it’s a perfect fit for Switch.

In handheld mode Resident Evil still looks very nice indeed, and it doesn’t look bad when playing it docked, either. Take control of Chris Redfield or Jill Valentine and discover, or rediscover, the magic that started the fan-favourite series. You’ll find yourself battling actual zombies rather than the parasitic monstrosities thrown at you in newer entries in the series, and it truly is quite terrifying at times.

There’s only one problem with Resident Evil on Switch: its price. It’s a bit steep to be honest, and so is the price of all the other Resident Evil games that are also worth checking out. Still, if you’re rich or are patient enough to catch them in a sale, they provide some of the best zombie games antics on Switch for sure. 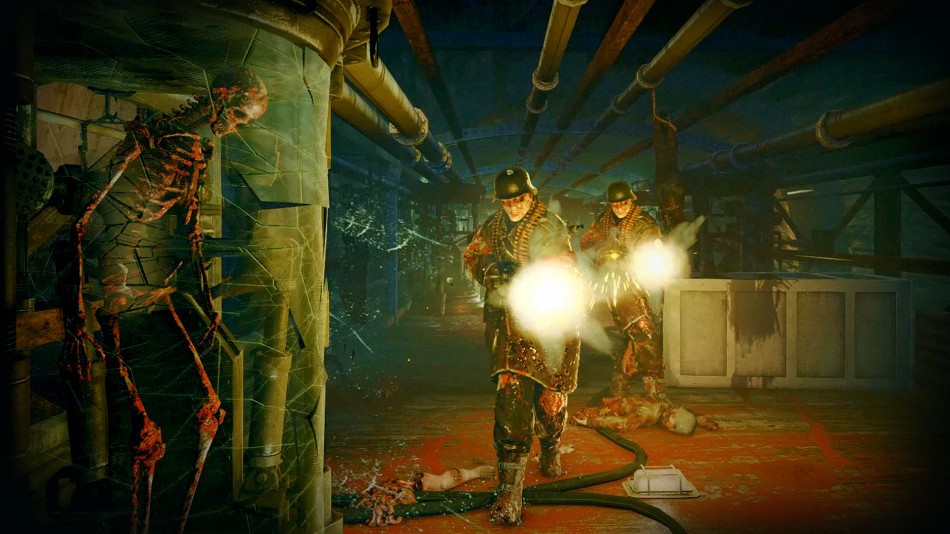 If you’ve not played it, Zombie Army Trilogy is fantastic on Switch. But Zombie Army 4: Dead War is even better. Though let’s face it, anything that pits you against a literal army of zombies and lets you blow out their undead, rotting brains with high-powered rifles is destined to be fun, right?

This latest entry in the Zombie Army series once again presents players with an alternate take on World War II. In an effort to win the war and cause Armageddon for mankind, Hitler has raised hordes of zombies. And so of course it’s up to you to thwart his evil machinations.

Recently released on Switch after being available on other formats for years, Zombie Army 4: Dead War might not look as good as it once did, but it still plays very well indeed. Killing hordes of zombies never gets old, apparently. So, if you like killing the undead left, right and centre, either alone or with friends, you need to add this game to your library. It’s undoubtedly one of the best zombie games on Switch. Maybe even the best. 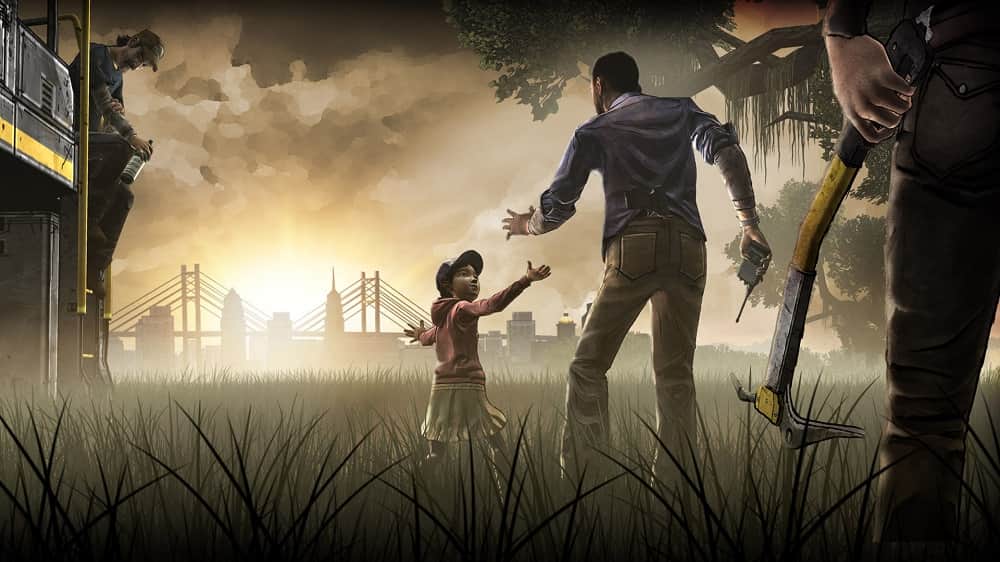 It may be based on the comic of the same name that spawned the successful TV programme, but Telltale’s The Walking Dead series isn’t quite as action-packed as Rick Grimes’ own fight against walkers. Instead, the game is a slower-paced narrative-driven experience, exploring the relationships of survivors, centring around a young girl named Clementine.

There are four seasons of Telltale’s The Walking Dead saga available on Switch all in all, so there’s an entire series of zombie-filled adventures to dip into if you’re yet to try out the grizzly cartoon-styled game. You should definitely start with the first season though, which is easily the best. It might not be all balls-to-the-wall action, but Telltale’s episodic adventure still has plenty of moments where you’re wrangling with zombies.

4. The House of the Dead: Remake 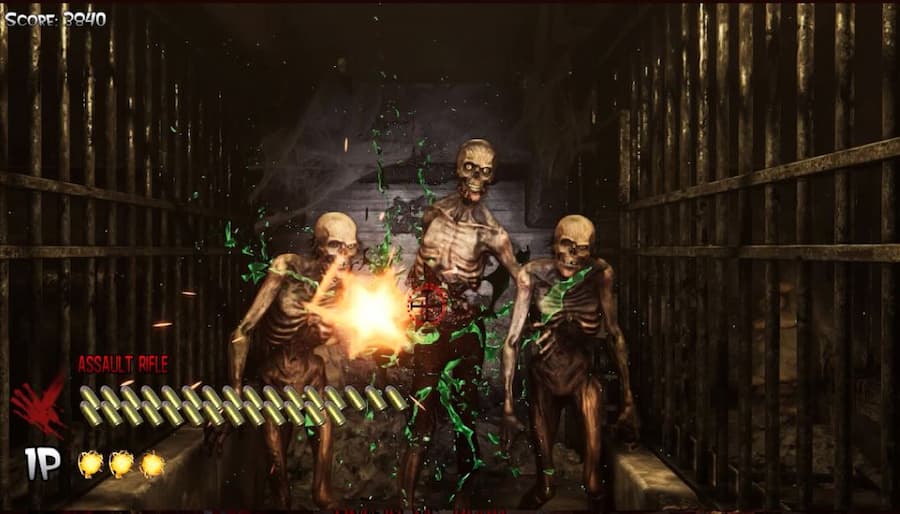 One of the best zombie games of all time returns, and it’s available on Switch. MegaPixel Studio’s remake of The House of The Dead keeps the gameplay of the original intact while dramatically improving the visuals. That means players are in for quick bursts of zombie-slaughtering fun.

Being an arcade game, a playthrough of The House of the Dead: Remake will only take about 30-45 minutes. But in that time you’ll have blasted your way through so many zombies that you’ll be grinning from ear to ear. And thanks to multiple routes through each of the game’s four chapters, chances are you’ll return time and time again.

There are other reasons to go back, too, such as a horde mode that ups the number of enemies on-screen at any one time, and an armory that lets you unlock numerous weapons. The only thing that’s disappointing about it is that you can’t play it with a light gun, as intended, but you’ll get over it.

Read our review of The House of the Dead: Remake

Check latest prices of The House of the Dead: Remake 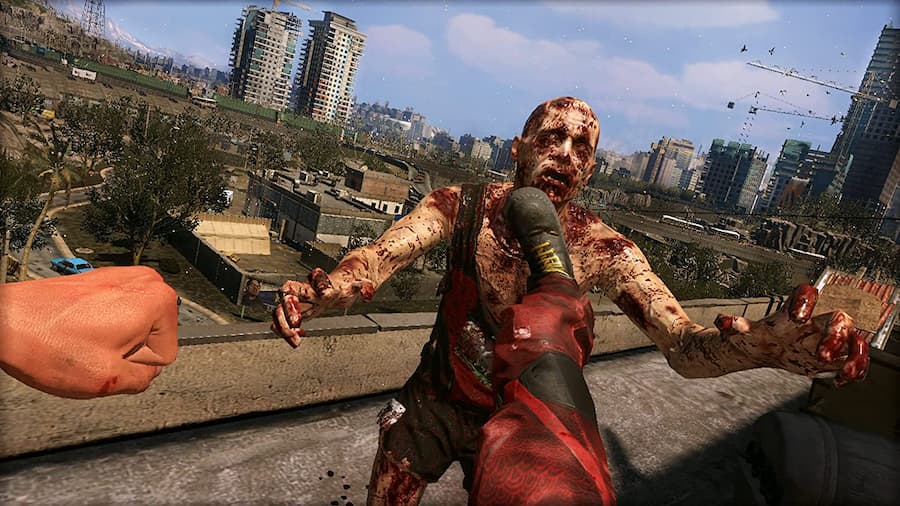 A massive open world adventure, Dying Light mixes thrilling combat, free running and a solid story, making it one of the best zombie games on Switch.

With a story centred around a special agent called Kyle Crane, Dying Light tasks players with investigating a quarantine zone in the foreign city of Harran. It doesn’t take long for you to realise why it’s been quarantined: zombies. So many zombies. And if you thought zombies were scary enough in the daylight, wait until you meet them under the shroud of darkness. They’re terrifying!

Being the Platinum Edition of Dying Light, this Switch port features all the updates released since the game’s original launch, as well as additional content such as The Following expansion. On top of that, this is a really impressive port, managing to look good while still holding a steady framerate. So, if haven’t played it yet, make sure you give it a go. 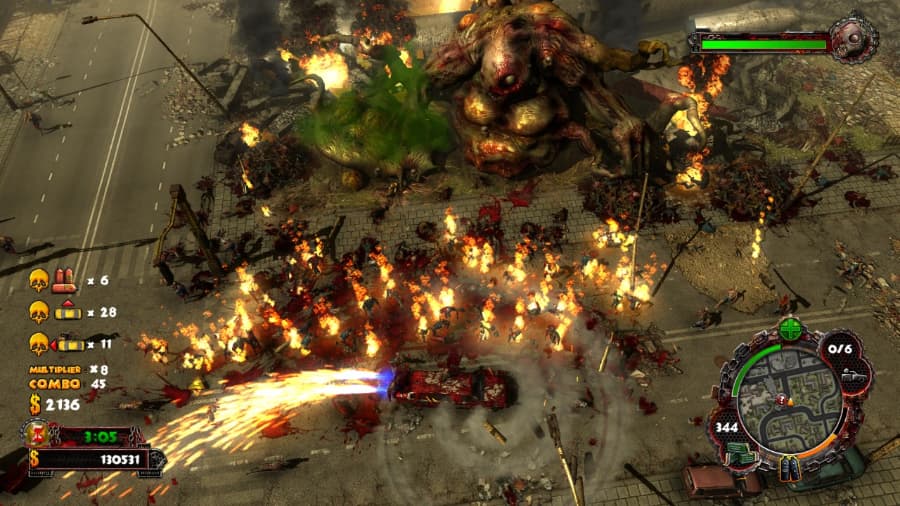 Unlike all the other games on this list, Zombie Driver: Immortal Edition is all about killing hordes of zombies while driving a range of vehicles. And it’s a hell of a lot of fun.

Finding yourself trapped in a city overrun with zombies, in Zombie Driver: Immortal Edition‘s Story Mode you’re tasked with completing objectives in over 30 missions. Along the way, you’ll unlock new vehicles to use, as well as earn the cash needed to upgrade them and your weapons. Then, when you fancy a break or have completed Story Mode, there’s both Blood Race Mode and Slaughter Mode to tackle.

In Blood Race Mode you’ll primarily be racing against competitors while avoiding zombies and making use of your weapons to get the upper hand. Some events, however, will have you fighting to destroy as many vehicles as possible within a time limit, or racing through checkpoints to prevent a bomb from blowing you up. Slaughter Mode, on the other hand, is all about surviving for as long as you can while massacring hordes of zombies.

There’s nothing clever or complex about Zombie Driver: Immortal Edition, but it doesn’t matter. If you just want hours of zombie-killing mayhem with your Switch, it’s perfect. 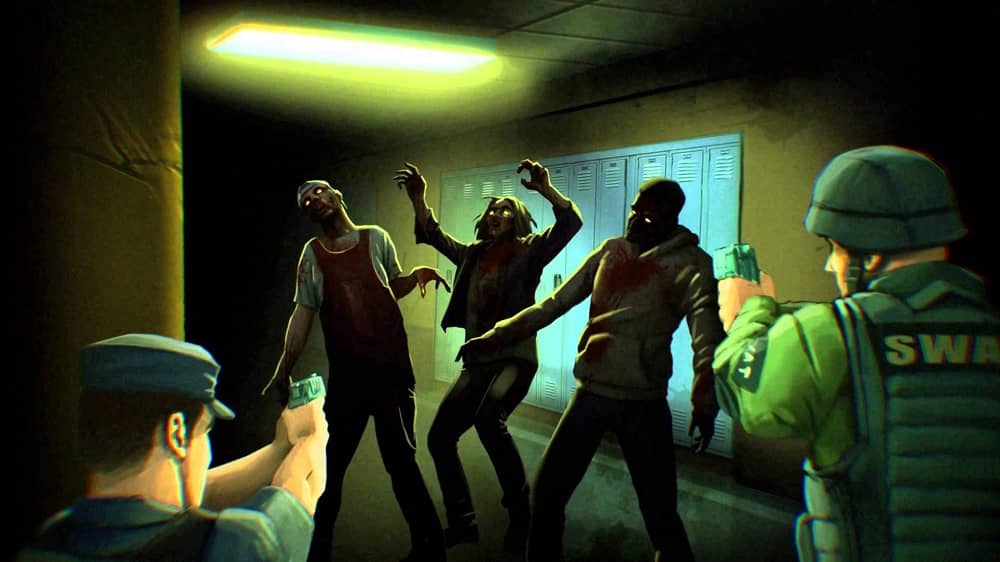 When there’s an outbreak of zombies, is there anywhere worse to be stuck than your school? That’s the basic premise of Corridor Z, a simple but addictive endless runner that sees you being chased by groups of flesh-hungry zombies. Corridor Z isn’t the most feature-packed of the zombie games on Switch, but its gameplay loop manages to be effectively entertaining.

You’re given a number of survivors to choose between, and your task is simply to break out of your safe room and run as far as you can before being caught by zombies. There are some bosses to come up against, and as you play you’ll unlock new weapons and skills to make your plight a little easier. You’ll eventually unlock new environments, too, so you don’t have to keep running down the same school corridors. It’s one of the best endless runners out there, and the threat of zombies chasing after you makes it all the more fun.

Read our review of Corridor Z 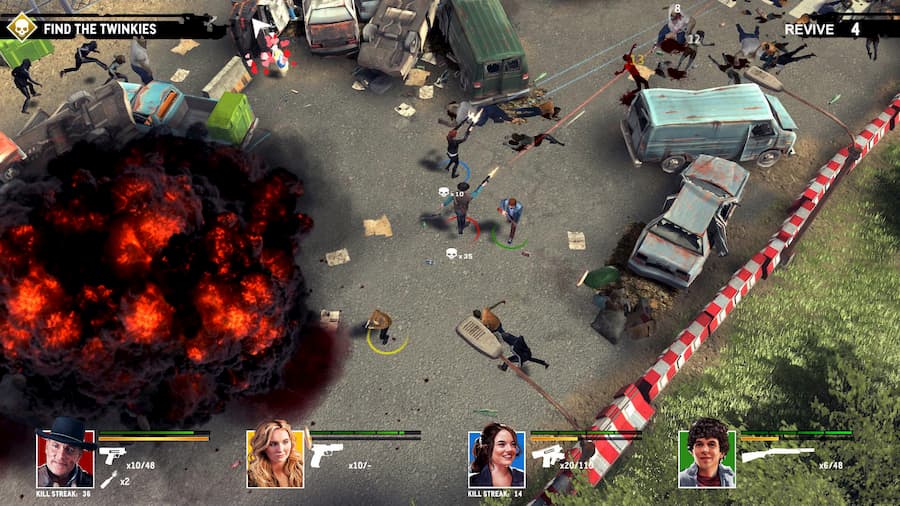 Being a film tie-in, you’re forgiven for thinking that Zombieland: Double Tap- Roadtrip is probably rubbish. The truth is though, it’s actually fairly entertaining.

A twin-stick shooter, Zombieland: Double Tap – Roadtrip allows players to team up and take on the undead while completing objectives. It’s not the best-looking game, and the repetition of soundbites is likely going to get on your nerves eventually. But it’s an enjoyable journey while it lasts.

We’re scraping the barrel here, because in the grand scheme of things Zombieland: Double Tap – Roadtrip isn’t great, but it is one of the best zombies games on Switch all things considered. 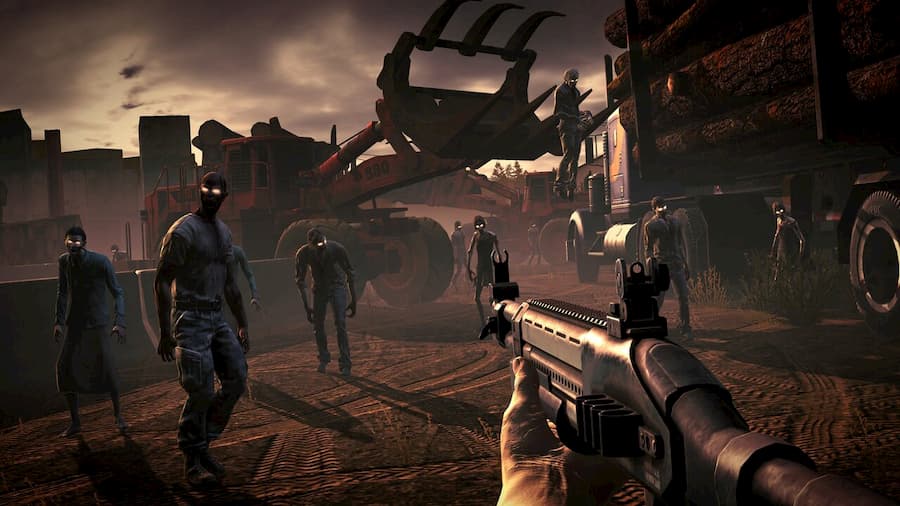 Starting out life as a mobile game, Into the Dead 2 doesn’t really ask much of you.

With a story that unravels as you play, your character moves forward of their own free will. All you have to do is veer them left and right to negotiate obstacles, and either avoid zombies or line up the perfect shot to kill them. Of course, as you progress, more and more zombies are thrown into the mix, and ammo becomes more scarce.

There are also endless runner type stages, challenging you to run as far as you can with certain weapons until you inevitably meet your demise. All in all, it’s simple but fun stuff. And there’s a wide variety of weapons to pick up to keep the action entertaining.

There’s one big problem with Into the Dead 2 though: it’s ludicrously overpriced. It’s even more expensive than the Resident Evil games on Switch, so you’ll definitely want to wait for it to go on sale unless you’re absolutely made of money.

Read our review of Into the Dead 2

Check latest prices of Into the Dead 2 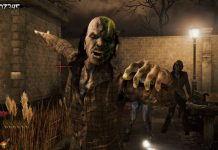