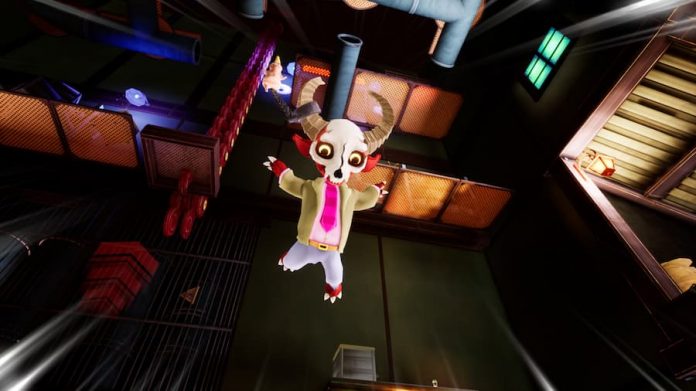 For us, nothing beats a healthy portion of meat and potato pie in the midst of winter, but it appears that Satan has other ideas. You see, he likes all sorts of ghastly things in his pie, like rotten eggs, mysterious powders and even used tampons. Yuck. But there’s one problem: someone (the chef) has forgotten that’s it’s Satan’s birthday. And so while it’s not in your remit as a demon with a desk job, it’s somehow now fallen upon you to get the ingredients. Welcome to Hell Pie.

A 3D platformer, Hell Pie sets itself apart from the crowd by being vulgar, crude, and a little bit devilish. Tasked with obtaining the ingredients for Satan’s pie, you’ll operate out of Sin Inc, a company that makes sure is hell is running correctly. From there, you’ll then travel to numerous hubs, each one with its own distinct look and challenges. And those hubs each have a number of levels for you to discover and complete, offering even more variety.

As you progress though Hell Pie you’ll find yourself battling against turds, giant flies and a whole lot more. You’ll also find yourself in ridiculous scenarios – like helping a drug lord take back his land from lizards. Along the way there are lashings of gore, foul language, ritual sacrifice and… ass cracks. So many ass cracks. Though there’s one ass crack you’ll come to rely on: that of your cherub that accompanies you everywhere. 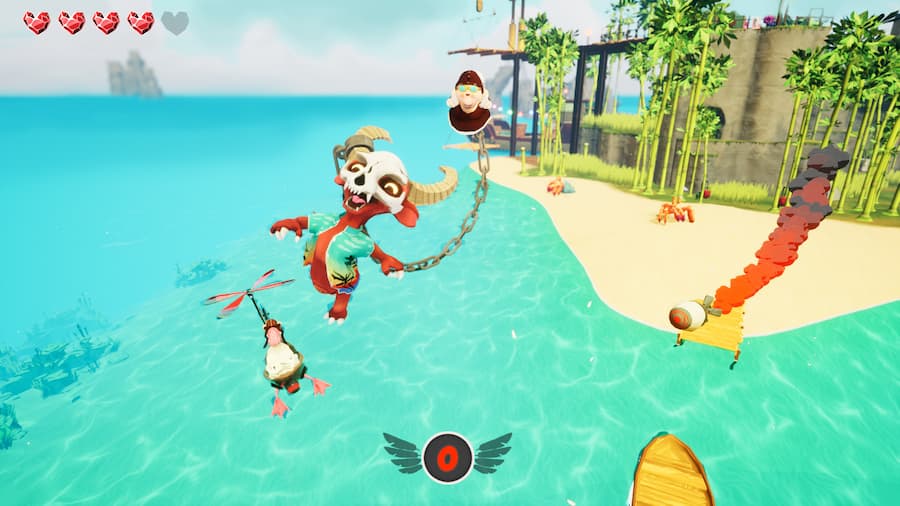 Chained to your side, your personal – and very naked – cherubs acts as both a weapon and a tool. He can be swung around like Kratos wields his Blades of Chaos, destroying enemies in his path. But he can also be used as a grappling hook, his wings suspending him in the air while you swing. Collects cans of food, and you can even upgrade his abilities, allowing you to swing further and a whole lot more.

Your demonic lackey also has some of his own tricks up his sleeve as well. He can double jump, dash, and make use of his horns to gain information about the area around him.

By finding and sacrificing adorable little horned creatures, new horns can be unlocked, too, giving him new abilities such as being able to ram hard objects and running at high speed. He can even pick up weapons on his travels, though doing so means he can’t make use of his cherub friend.

For everything that Hell Pie has going for it, however, a number of less than stellar elements bring it down. Playing the PS5 version for review, the visuals aren’t impressive at all, for example. And the lack of voice acting is a shame. But more problematic is the fact that the platforming just isn’t as tight as it could be. It can be hard to judge the distances of jumps, and the camera can sometimes be a little erratic.

There are bugs to contend with, too. We’ve had save game issues, progression-halting woes only resolved by reverting to the last checkpoint, and have been stuck on the environment on a couple of occasions. Thankfully checkpoints are so frequent that any deaths you suffer or bugs you encounter don’t cause too much frustration.

For fans of 3D platformers, Hell Pie has a lot to offer. It’s an inventive little title with an original premise and setting, and while it has some issues, it’s enjoyable on the whole. For those that can see past its drab visuals and overcome the occasional frustration, then, it’s worth picking up. Well, as long as you’re happy with ripping off horns from defenceless animals for your benefit.

This review of Hell Pie is based on the PS5 version of the game, via a code provided by the publisher. It’s available on PS4, PS5, Xbox One, Xbox Series X and PC.