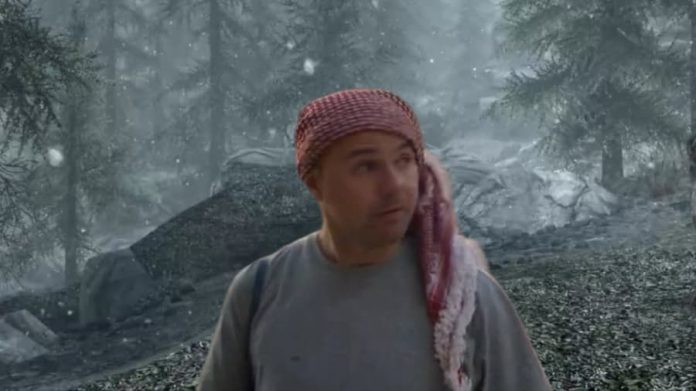 Ever wondered what presenter and professional cynic Karl Pilkington would make of Skyrim’s chilly lands? This mash-up video provides the answer.

Technically, as the title “Karl Pilkington in Skyrim Part 2” suggests, this is the second video that relocates Pilkington to Skyrim, via some accomplished video editing. But, crafted by YouTuber HuffingtonPants, it completely nails the nightmare of Skyrim’s NPCs, compressed into one 48 second burst.

Poor old Karl goes for a walk, only to find himself accosted by all manner of locals who, surprise surprise, have a quest or some other errand to offer him. Sure, Skyrim‘s NPCs aren’t usually that fast off the mark but, as much as we still love The Elder Scrolls V: Skyrim, being the only person in the world who can do anything feels off.

It’s like stepping into a fantasy-themed version of The Truman Show, and Karl’s cynicism is the perfect antidote to a world that is desperate to make you the hero. You can watch the video below and it’s absolutely worth sticking around until the end to watch Karl interact with the game’s talking canine.

HuffingtonPants has also inserted Karl into Red Dead Redemption 2, The Forest and, if you can believe it, the Dragonball Z cartoon. You can find their channel here; they’ve only been posting for a month or so but if they keep churning out this kind of ridiculous content we’ll be checking in regularly.