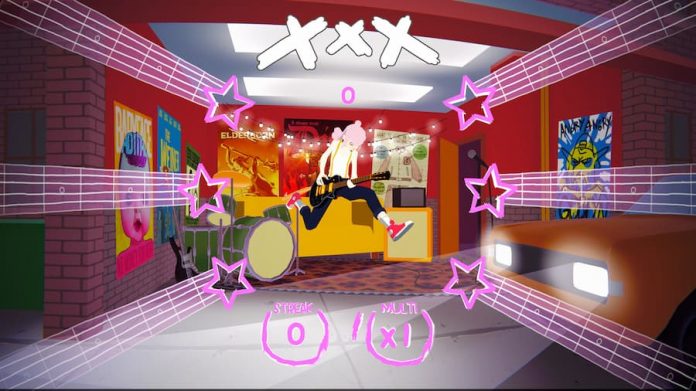 It’s hard being a teenager, trying to work out what to do with your life.

Friends, family, career; there’s so much to worry about, and so it’s nice to have an escape. For Astrid, that escape is music, and so she deals with life’s stresses by rocking out with a sweeping brush in her room. New music rhythm game LOUD charts her journey from a bedroom-rocking wannabe to a signed artist.

Unfortunately, while it may sound like an epic journey, it unfolds in just about an hour or so. Astrid’s rise is split into four distinct periods, and each offers up three songs for you to play through. Ultimately, then, by the time you’ve completed LOUD there are 13 songs you can jump into at any time (thanks to a bonus unlockable song), as well as four clothing and guitar options.

It doesn’t sound like a lot, but when you consider the low price of LOUD (£10.79 on the eShop, it’s not that bad. Even more so when you consider there are multiple difficulty levels to work your way through. Trying to get the best grade on all songs on the hardest difficulty may prove to be challenge, extending your playtime. It’s just a shame that the gameplay itself is pretty uninspired. 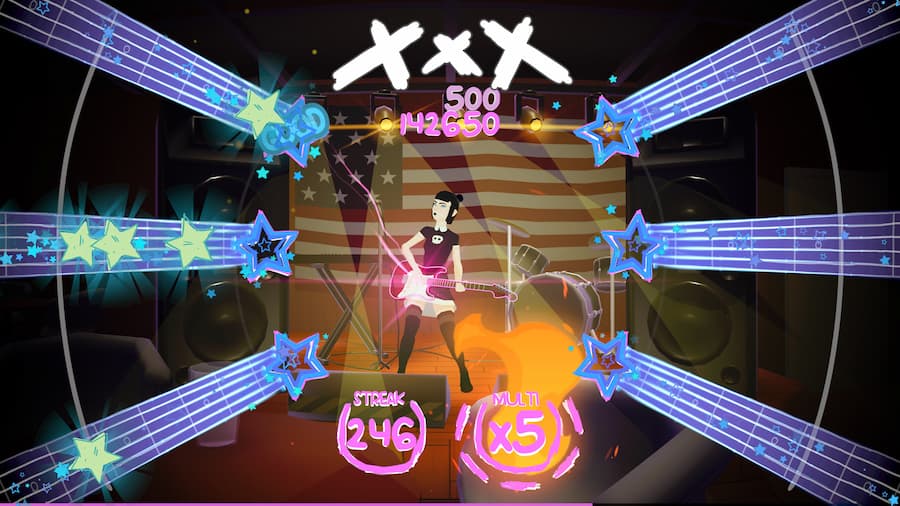 LOUD employs a system where there are three tracks on either side of the side. The tracks on the left correspond with up, down and left on the d-pad, while the tracks on the right correspond to the X, A and B buttons. Icons move in from the outside of the screen, and when they reach the end of the track it’s up to you to hold, tap or mash the required button. For a bit of extra flair, you can wiggle the left or right analogue stick during held notes to apply a bit of whammy.

It’s a pretty standard system and, for the most part, it works fairly well. The notes don’t always feel like they match up with the music though. Also, as you’ve probably guessed with the guitar focus, all of LOUD‘s tracks are grungy rock numbers. If you don’t like crunchy guitars, there’s nothing for you here.

It’s the fact that the tracks here don’t have vocals that really detracts from the experience, though. Astrid mentions that she writes her own songs, but it’s not reflected. It seems like a missed opportunity to further express her emotions and allow us to connect with her more as a character.

These issues aside, there’s no denying that LOUD is an enjoyable little music rhythm game with a lovely positive message and plenty of spirit. It may be a little brief and rather basic, but it’s nicely presented and well put together. If you’re into rhythm games and rock music it’s worth a look, but it definitely won’t blow your socks off.

This review of LOUD is based on the Nintendo Switch version of the game, via a code provided by the publisher. It’s available on Switch and PC.