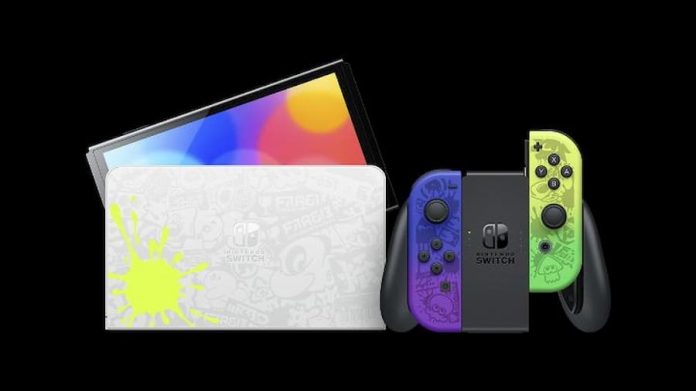 Nintendo’s new Splatoon 3 OLED Switch may not be the Switch Pro but it’s still wallet-drainingly tempting.

But it’s been decked out in symbols and colours straight from Splatoon 3, the third entry in Nintendo’s paint-hurling, squid-morphing series. That title, which isn’t bundled with this Switch, is set to arrive this September 9th. So it’s fitting that the Splatoon 3 OLED Nintendo Switch arrives on the 26th of August, just a couple of weeks earlier.

On top of that, the 9th of September will also see the release of a Splatoon-themed Pro Controller and a Splatoon-themed Switch carrying case. You can pre-order the Splatoon 3 OLED Nintendo Switch from Nintendo’s own site and we’d expect it to make its way to other retailers shortly. It’s priced at £10 more than the standard OLED Switch, though non-Nintendo retailers may charge more or less.

Something fresh is surfacing! The #NintendoSwitch – OLED Model #Splatoon3 Edition splashes down on 8/26! pic.twitter.com/dW4EoT7Rjs

As for the Switch Pro? There’s no evidence that a more powerful version of the Switch exists, dubbed the Switch Pro, but rumours persist. Nintendo have, previously, introduced a two-tier console, the 3DS and the slightly more powerful New 3DS, but doing the same to the Nintendo Switch would be a risky move.