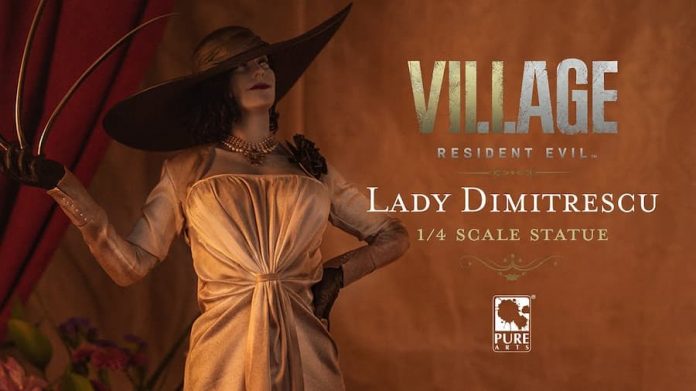 Lady Dimitrescu might object to this reduction in stature; Capcom have confirmed that, in the context of the game, she’s over nine feet tall. But this 1/4 scale statue is still hugely impressive, given the amount of attention that’s been paid to it.

Yes, it’s true that Lady Dimistrescu, aka Tall Vampire Lady, is only one of Resident Evil Village’s many bosses. But, revealed relatively early on by Capcom, the bosomy, plum-voiced antagonist was quickly embraced by in the internet.

Her statue, which has been crafted by PureArts, looks absolutely stunning and features a custom, hand-tailored gown, meaning her dress isn’t just a chunk of resin. It also has two interchangeable hands; one hand rests on her waist, but the other can be swapped between a claw and a regular hand clutching a cigarette holder.

In short, it looks very, very cool. The catch is that it’s also very, very expensive. There’s a special edition, which comes with a Castle Dimitrescu key, but it’s sold out. The regular edition, which you can still pre-order, is $1,499.00 excluding postage and whatever import taxes your country’s customs impose.

The non-limited edition run will consist of 666 statues, which is a smaller run that some other statues we’ve seen. It’s possible that some will eventually find their way to eBay but a) you might end up paying even more and b) you should probably run a black light over your purchase if you buy a second hand one.

The PureArts Resident Evil Village Lady Dimitrescu statue is available to order now, though it won’t ship until the third quarter of 2023.