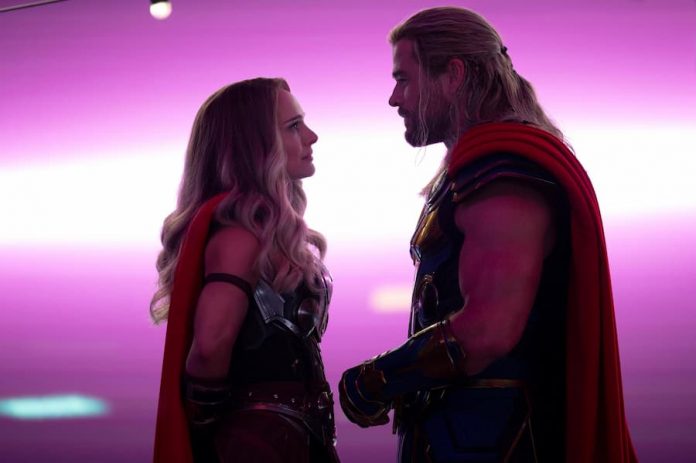 Having taken a brief diversion in the darker, more experimental realm of Doctor Strange just a couple of months ago, Thor: Love and Thunder is a return to more familiar territory in both literal and metaphorical senses.

While Doctor Strange in the Multiverse of Madness offered its own take on the horror genre, Thor: Love and Thunder provides us with a unique twist on a love story. Okay, so not every note lands perfectly, but this is, at the very least, a thoroughly entertaining effort. And if we’re not going to the cinema to be entertained, what are we even doing anymore?

Way back in 2012’s The Avengers, Agent Coulson said, “With all that’s about to come to light, people might just need a little old-fashioned” and that’s certainly the case here. Following a run of very heavy material in both movies and Disney Plus series surrounding The Infinity Saga, Love and Thunder injects some levity and fun back into the universe. This all makes for a warm sense of familiarity, with Thor back again for a fourth solo movie – the most title appearances for any MCU character thus far.

With the exception of the origin of the movie’s villain, Gorr the God Butcher, in the very first scene, the opening few scenes really whip by. There’s plenty to catch up on here, with Thor having carried on a close friendship/working relationship with the Guardians of the Galaxy, and Valkyrie ruling as King of Asgard. The return of Jane Foster feels somewhat shoehorned in, with the finer details of her lengthy absences glossed over, but her character and that of her as Mighty Thor are equal parts interesting and enjoyable. Finally, Korg, the incarcerated Kronan-turned-saviour-of-Asgard, voiced by the film’s director, Taika Waititi, is a real delight and gets much more of his well-deserved time in the spotlight.

The story here is that Gorr, a very “Ronan-esque” individual, for those who recall the somewhat underwhelming villain of the original Guardians’ movie, feels slighted by his god. A magical macguffin, the Necrosword, appears and offers him the power to kill a god with remarkable ease. With the sword acting as something of a monkey’s paw, the now-tainted Gorr intends to repeat this killing ad infinitum, until every living god in the universe is no more. Of course, this includes everyone’s favourite deity, Thor, God of Thunder.

Direction by Waititi, well-known for his almost total reinvention of Thor’s character in Ragnarok, invests further in his radical, over-the-top direction. Whilst it’s a shame to lose the more dramatic options that the earlier visions of Asgard and the Nine Realms offered up, the end result is so much fun that it’s extremely forgivable. The humour here definitely comes across as more absurd and goofy than even Ragnarok, but it now at least feels like a natural evolution rather than a dramatic change of direction. This choice was made knowing Chris Hemsworth has good comedic timing and he is certainly on-form here.

The look of Thor: Love and Thunder is also more akin to Ragnarok and the second of the Guardians films, with bright, punchy colours abound. This makes the film’s later incursions to Gorr’s monochromatic “Shadow Realm” all the more contrasting and was clearly a conscious decision which really pays off. Thor treats himself to several new and comic-accurate looks this time, too, with Natalie Portman’s Mighty Thor similarly styled. The whole movie really feels like a celebration of the character and of the worlds he inhabits.

Unfortunately, the story is the main downfall here. Along with the rushed return of Jane Foster, there’s little meat added to the bones of the opening scene and so Gorr comes across as rather one-dimensional. His abilities are never really explained with some fight scenes feeling a little inconsistent, leaving your imagination to fill in some gaps. During one altercation, for example, Gorr uses vine-like tendrils to secure people to a wall (very Stranger Things) but in a later scene, these tendrils are conspicuously absent. This all leads to a somewhat unusual and unexpected, but ultimately satisfying, ending which both rounds off this chapter of Thor’s story arc whilst leaving things open for further exploration and interpretations of the character. After all, with What If…? having truly opened the multiversal doors, anything now seems possible.

These minor issues aside, this is a strong entry in Thor’s catalogue and to the MCU as a whole. Waititi’s direction is joyous as always, and even in the more questionable moments of Thor: Love and Thunder, we’re undoubtedly left with a smile on our face. It’s a big step up from the disappointment of Thor: The Dark World, that’s for sure, and we’re excited to see where Thor’s adventures take us next.