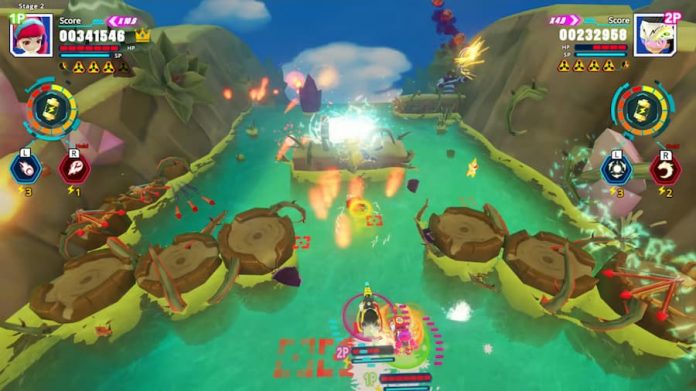 Who left a cat guarding the world?

While they tried their best, there’s now an emergency. Something called the Deathrix has invaded, launching a meteorite that has caused a massive wave. And so now it falls to you to ride bodies of water while combating a variety of monsters. That’s After Wave: Downfall in a nutshell.

Dress it up however you want, but After Wave: Downfall is essentially a vertically scrolling shooter. Waves of enemies appear on the screen, and it’s up to you to avoid their attacks while combatting them. Aside from your basic weapon, you have two special weapons that require energy to be fired, and a limited use bomb attack that does massive amounts of damage. The only other thing to consider is the speed of your ship: you can raise or lower it at will to make avoiding enemies, obstacles and bullets that bit easier.

Four game modes are on offer in After Wave: Downfall. Story mode offers up numerous unlockable difficulties, and tries to give some context to the action. However, poor translation means you’re likely to just ignore any exposition that’s on offer here. You only have one life to complete each stage, unless the game offers up the option to continue at the expense of some currency you earn while playing. It seems strange, when the accompanying arcade mode offers three lives while doing away with all the story trappings. You can start at whichever stage you’ve reached in story mode, though. 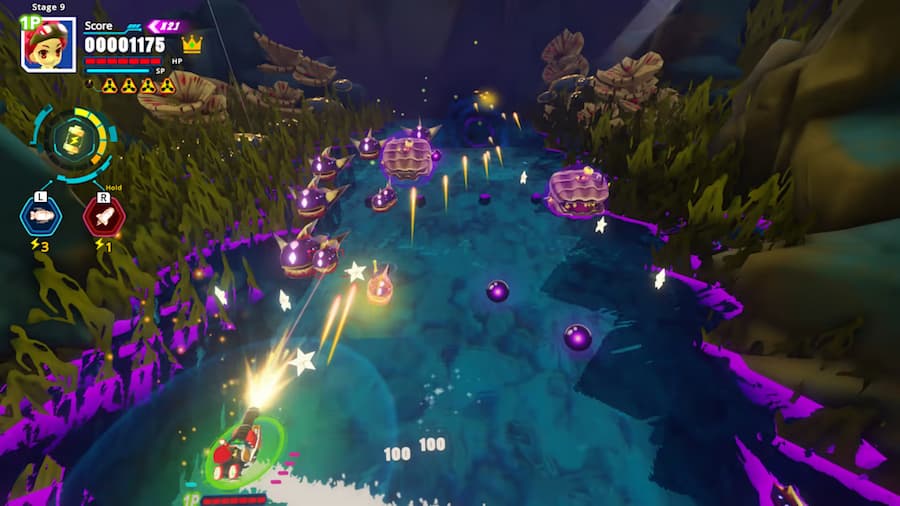 Stupidly, you’re forced to play though its story mode if you want to get the most out of After Wave: Downfall. It’s the only mode in which you can earn the aforementioned currency, you see, and that is used to not only unlock additional characters for use in all modes, but also upgrade them. A number of generic upgrades are available that apply to all characters, increasing their health and suchlike, and characters also have their own unique upgrades available. Needless to say, you’ll have to do a whole lot of grinding in story mode to unlock everything.

Aside from story and arcade modes, there’s also practice mode where you can tackle any of the stages you’ve unlocked in order to master them, and an extra mode which contains four separate challenges. ‘Rafting’ tests your ability to avoid obstacles against the clock, while ‘Collect’ challenges you to grab as many pearls as you can. There’s also ‘Beat the Score’ where your aim is to simply get the highest score you can, and ‘Defense’ where your goal is to prevent enemies from reaching the bottom of the screen.

For its budget price, then, After Wave: Downfall has a reasonable amount of content. Chances are though, that you just won’t have the urge to engage with it. While the core concept here is solid, it’s executed in a way that leaves a lot to be desired. For a start, the visuals are horrid. There’s also the fact that your ship seems to stutter as it moves which is a bit off-putting. Add in balancing issues and the fact that the screen is often overly busy, and you have a game that isn’t all that enjoyable to play.

Still, if you do get on with it, you’ll possibly be thankful that you can also play it in local co-op. And each of the characters on offer has their own unique weapons which makes them play a little differently. It’s just a shame it will take a while to unlock them all and fully upgrade them.

After Wave: Downfall isn’t a game we can recommend. There are plenty of other vertical scrolling shooters out there, and many of them are more worthy of your time and money. Still, if you do happen to pick it up you might have some fun with it, and it’s at least got an original premise at least. But with its various issues, it feels very much like a missed opportunity.

This review of After Wave: Downfall is based on the PS4 version (played on PS5), via a code provided by the publisher. It’s available on PS4, PS5, Xbox One, Xbox Series X/S and Switch.