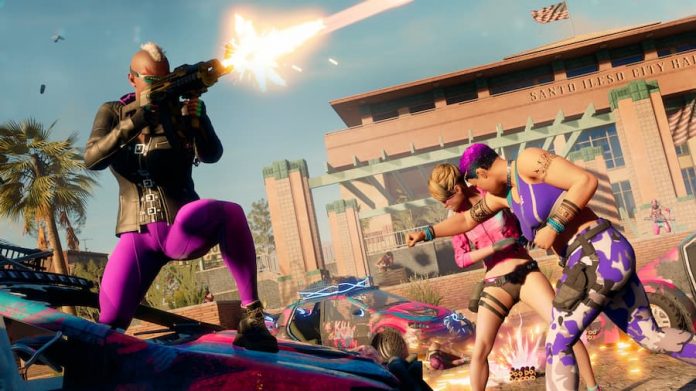 Another month, another suite of new games to look forward to.

August is surprisingly packed, and we’re glad to see it after a rather quiet July. No matter what type of game you enjoy, there seems to be something on the cards for you over the course of the next month. Management sim lover? We’ve got Two Point Campus. Action? Rollerdrome. Open world shenanigans? Saints Row.

This isn’t an exhaustive list of every game coming out in August; it’s our curated selection of games we’re particularly excited for. We’ll have further coverage of all games as the month progresses, but for now, read on to find out what you should have on your radar this month.

South of the Circle

South of the Circle originally released in 2020 on Apple Arcade. But if you’re not a subscriber, you can finally play it on other formats. And it’s well worth diving into, particularly if you’re a fan of narrative-driven adventures. This tells the story of Peter, a Cambridge academic sent on a research mission to Antarctica during the time of the Cold War. After his plane crashes, you’ll help him fight for survival, while also unravelling his past, delving into his childhood, his life as a lecturer and his relationship with fellow academic Clara. We played this one last week, and couldn’t put it down from start to finish.

Read our review of South of the Circle

Fan of Two Point Hospital? You’re going to want to get on board with Two Point Campus. The follow-up tycoon sim from Two Point Studios switches out medical facilities for universities. You’ll need to build the best educational establishments you can, filled with classrooms, lecture halls, dorm rooms and student union buildings. You’re not going to want to miss it.

For fans of point and click adventure games, you’re going to want to keep your eyes on Lost in Play. This is one of the most gorgeous-looking games we’ve seen, aping the style of a kid’s cartoon perfectly. It tells the story of a brother and sister setting out on an epic adventure amongst magical creatures and mystical settings. You’ll need to solve puzzles along the way, challenging you to use your noggin, but based on our time previewing the game earlier this year, it’s going to be something special.

Read our preview of Lost in Play

Combining town building with roguelike action, Cult of the Lamb feels at times like a satanic version of Animal Crossing. Bizarre as that may sound, based on our time previewing the game, it’s something really special. Its fast-paced action is reminiscent of the likes of The Binding of Isaac, and its tone similarly sinister. Appeasing your ever-growing cult of Satan worshippers is a lot of fun too.

Read our preview of Cult of the Lamb

Combining management simulation with arcade games, Arcade Paradise is a rather unique beast. You see, you’ve just taken over your dad’s laundrette. The laundry business itself doesn’t make much money – but the few arcade games in the back pull in surprising numbers. And so you take it upon yourself to expand on it, growing your own arcade empire while still keeping the laundrette up and running. Manage the business while playing the arcade games yourself. We’ve previewed it earlier in the year and can confirm it’s brilliantly addictive.

Read our preview of Arcade Paradise

Previously exclusive to PlayStation, Marvel’s Spider-Man is making its way to PC this month. This is the Remastered version, too, complete with enhanced visuals and plenty of PC-only settings to fiddle with. If you’re yet to play Spider-Man, you’re in for a treat: this open-world adventure casts you as the arachnid hero himself, and swinging between rooftops in New York City is as exhilarating as you’d imagine. Combine that with excellent storytelling, engaging combat and plenty of missions to sink your teeth into, and you’ve got one of the best superhero games ever made.

Way of the Hunter

If you like the idea of being out in the wild, hunting magnificent creatures without ever having to actually harm a real animal, may we present Way of the Hunter? We don’t condone real-life hunting in any way, shape or form, but there’s something about the openness and freedom that these games offer that really calls to us. And Way of the Hunter looks like it might be one of the better ones.

Check latest prices of Way of the Hunter

Tony Hawk’s Pro Skater, but with guns. At least, that’s how we described Rollerdrome when we previewed it last month. This fast-paced action game takes place in a future where a new, deadly sport has taken the world by storm. Taking place in an arena, the sport of rollerdrome puts you on rollerskates, and tasks you with shooting your opponents before they can shoot you. But you’ll need to perform stunts and tricks as you go, otherwise you’ll run out of ammo. It’s stylish, slick and a lot of fun.

Read our preview of Rollerdrome

Saints Row is back, but not quite as you know it. Out with Johnny Gat, and in with a whole new bunch of saints, and a new city to explore. We’ve seen quite a few hands-off previews of Saints Row over the last few months, each one getting us a little more excited, and now we can’t wait to get our hands on it. It’s packed with the same humour and over-the-top action that we’ve come to expect from the series, complete with a big world filled with missions and challenges to complete, rival gangs to fight against, and more.

Read our preview of Saints Row

A stylish RPG from Atlus, Soul Hackers 2 is looking like a game to keep your eye on if you’re a fan of the genre. Players will take on the role of Ringo, an agent created to prevent the world from being destroyed. High stakes, then. You’ll explore a futuristic, cyberpunk version of Japan, take out enemies and amass an army of demons to fight by your side. Slick and supernatural, we’re looking forward to getting our hands on this.

You might have already played (or at least heard of) Inscryption, following its initial release on PC in 2021. But if you’re not a PC gamer and instead own a PS4 or PS5, you’re in for a treat. Presented like a tabletop card game, Inscryption is dark and subversive, and keeps you on your toes from start to finish. We may have already said too much. But needless to say, this is a game well worth checking out if you like something a little bit… different.

Combining Pikmin with 3D adventure platforming, Tinykin is a game we’ve been excited about since we previewed it at the start of the year. Not only is it absolutely beautiful, casting you as a tiny character sent to explore a huge, oversized house, but it’s very clever too. You’ll collect an army of Tinykin as you play, all with varying abilities that you’ll need to employ. Need a big item moving out of the way? The pink ones can do that. Need to cause an explosion? You’ll need red ones. Needless to say, this is a must-play for fans of platforming adventures, and we can’t wait to play more.

Read our preview of Tinykin

While we weren’t completely blown away by Dusk Diver 2 in our preview, it’s still shaping up to be a worthy sequel to a unique action game. It picks up where the first Dusk Diver left off, and so if you’re not already familiar with the series, you might want to start there first. Still, fans can look forward to more action, new characters alongside familiar faces, improved combat and an ew story to sink their teeth into.

Read our preview of Dusk Diver 2

If you’re a fan of Her Story or Telling Lies, you’re going to want Immortality on your radar. This is the latest live-action narrative-driven experience from Sam Barlow, and based on what we’ve seen, it might be the most adventurous yet. It revolves around Marissa Marcel, a film star. She made only three movies, but none of them were ever released. And Marissa Marcel has disappeared. Expect to delve into a mysterious world, and uncover the truth around what happened.

If, like us, playing Shredder’s Revenge recently ignited your love of all things Teenage Mutant Ninja Turtles, we’ve got good news for you. The Cowabunga Collection bundles up 13 retro TMNT games, bringing them up to date with new features like online play, couch co-op, save any time and rewind. And, like any good retro collection, it’ll be packed with concept art, sketches and various bits of media to nosey through.

Ready for some more crazy Crypto action? The remake of Destroy All Humans! 2 is just a few weeks away. And based on the time we had previewing the game earlier this summer, it promises to be just as zany and enjoyable as ever. Run around the world as a blue alien, causing chaos, getting involved in bizarre government conspiracies and probing cows, all while enjoying a throwback 60s aesthetic. Groovy.

Read our preview of Destroy All Humans! 2 Reprobed