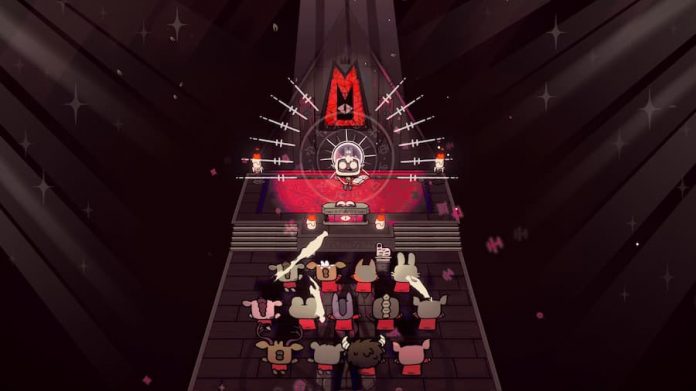 Being a cult leader sometimes means making sacrifices – of your devoted followers. So, how do you sacrifice your followers in Cult of the Lamb?

There are a number of reasons you might want to sacrifice a follower in Cult of the Lamb. Maybe one of your followers has dissented. Or maybe you simply want to make a bold statement to the rest of your followers. Or maybe you’re just mad on power and want to show off. Hey, we’re not going to judge. There are a number of ways to sacrifice followers, but they’ll all require you to have a chapel in your camp.

Thankfully, the chapel is one of the first buildings you’ll unlock, and you’ll need to build it to progress through the game. From within the chapel, you can perform sermons and rituals – and some of those rituals involve sacrifice. And, luckily for you, one of the first rituals you’ll automatically unlock is the Sacrifice of the Flesh.

To unlock the Sacrifice of the Flesh in Cult of the Lamb, you simply need to progress to the point where you’ve defeated the second boss of the first dungeon. Once complete, you’ll be given the Sacrifice of the Flesh, and the freedom to use it whenever you like. Not too often, however: all rituals have rather long cooldowns. You can’t be going too sacrifice-happy, after all. You’ll have no followers left!

Providing you have the necessary materials, you can begin a Sacrifice by entering the chapel and interacting with the altar. Choose Rituals, then select Sacrifice of the Flesh from the menu. You can then choose which follower you’d like to give to the gods. It’s as simple as that.

As you progress through Cult of the Lamb, you’ll unlock new types of rituals, allowing you to sacrifice your followers in different ways. By unlocking a Law and Order doctrine, you can gain the ability to Ascend a follower rather than Sacrificing them, which gains you more faith and loyalty from your surviving cult.

You can also just straight-up kill your followers, if you want. They’ll all die eventually of old age, but an unlockable Doctrine allowed you to simply murder them by interacting with them. You can also send them on a dangerous Mission, if you have the Missionary building unlocked. Or you can make them eat very questionable food – some meals have a higher mortality warning than others.

Click here for more Cult of the Lamb guides