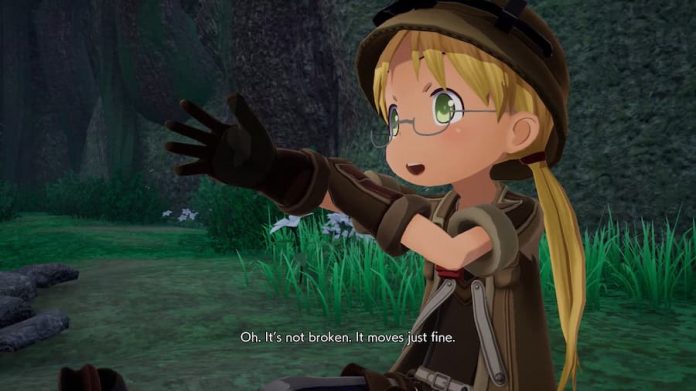 Made in Abyss: Binary Star Falling into Darkness’s latest trailer shines a light on its characters and core gameplay.

As noted in our last article, we still think this action-RPGs cast are idiots for venturing into a yawning abyss in search of fame and fortune. If they’d watched The Descent, The Cave or, indeed, had a scrap of of common sense they’d know it was a bad idea. But, we have to admit, Made in Abyss’s new trailer does make it look like fun.

The trailer kicks off by introducing several of its characters; Nanachi, who’s either a sentient stuffed animal or is cosplaying as one, adventures Tiare and Raul, black-clad Bondrewd and more. We’re a little confused by Bondrewed’s presence  – with his outfit and deep voice it’s as if he’s stumbled in from a Metal Gear game and no-one’s told him he’s in the wrong place.

Grimly G. McGrimdark aside, the trailer also reveals a couple of interesting gameplay features. Firstly, the location of monsters and relics changes with each dive and secondly, if you don’t make it back to the surface, you don’t keep your items. The latter sounds like a good incentive not to exhaust yourself battling foes.

Sure, you might have hacked the head off the Great Beast of Xalygdgfdhjghdfk and retrieved the Holy Triangle of Fnnnnn but if you’ve only got one scrap of energy left to reach the surface you’re going to have problems. And, unlike the Souls games, there’s no indication that you can retrieve your bounty.

You can feast your eyes on the full trailer above. Yes, it looks cute but you’re still leading your characters into a howling chasm, so don’t count on Made in Abyss: Binary Star Falling into Darkness being a cakewalk.

Made in Abyss: Binary Star Falling into Darkness, published by Spike Chunsoft and developed by Chime Corporation, arrives on PlayStation 4, Nintendo Switch and PC (via Steam) this September 2nd.

Action-RPG Made in Abyss: Binary Star Falling into Darkness Hits the West Later This Year