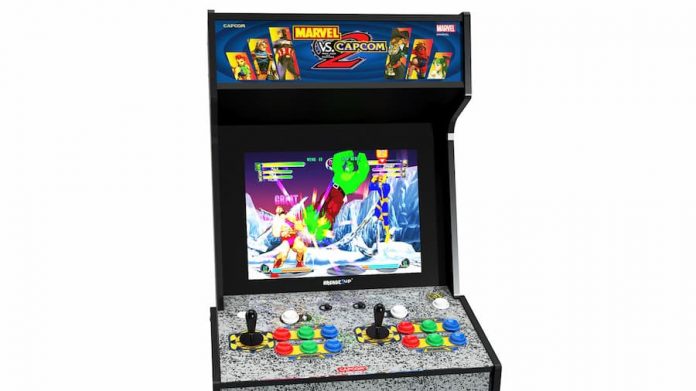 Marvel vs Capcom 2 is back, thanks to Arcade1Up, who have resurrected the brawler as an arcade machine.

Marvel vs Capcom 2 is one of the best arcade brawlers of all time, featuring a ridiculous number of Marvel and Capcom characters, teaming up to punch each other in the face. At least it was, because it’s been unavailable for quite some time.

Released in the space-year 2000, the last platforms it was released on were the PlayStation 3 and Xbox 360 but those versions of MvC 2 were delisted in 2013. So from then on, the only way to play it has been to get physical copy of the original Xbox, PlayStation 2 and Dreamcast releases, an actual Marvel vs Capcom 2 arcade machine or board or to run it on an emulator which is, of course, naughty.

Arcade1Up aren’t, sadly, returning it to digital storefronts, but they’re producing the best thing, an actual Marvel vs Capcom 2 arcade machine. Granted, Arcade1UP’s machines are 3/4 size so they’re smaller than old-school arcade machines, even with a riser, but they’re still pretty great.

We used to have an Arcade1UP Street Fighter 2 arcade machine and, while it could have done with stereo speakers, it still offered a pretty authentic arcade experience. So we’re reasonably confident that Arcade1Up can do the same for Marvel vs Capcom 2 fans.

On top of Marvel vs Capcom 2, the machine will feature a wealth of other Capcom games including:

That’s eight games in total, all without the need to stick a 20p in the machine every time you lose. On top of that, there’s a headphone jack for late night play, a riser to make the machine that little bit taller and WiFi for online play.

Its release was announced, appropriately enough, at the weekend’s EVO 2002 fighting tournament. There’s no price as yet, though you can expect it to cost in the region of $499.99 give the price of previous cabinets. Arcade1Up is taking pre-orders starting this September 8th, through the machine’s product page.

At least.. you can if you’re in the US or Canada. If you’re outside those areas, don’t count on being able to get your hands on it any time soon. Remember that Street Fighter 2 Arcade1Up we mentioned owning? We got our hands on that two to three years after its US release, and the company’s original Marvel vs Capcom cabinet bypassed the UK entirely.

Still, we have our fingers crossed it’ll eventually reach these shores. In the meantime, if you’re in the US or Canada and you’ve been craving the lost joys of Marvel vs Capcom 2 and you can spare $500 or so, don’t let our cross-Atlantic envy stop you.