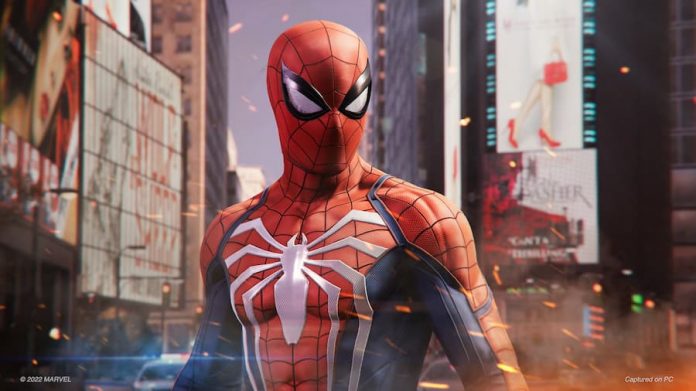 After years of sub-par releases via Activision, Marvel’s Spider-Man finally got the video game adaptation it deserves thanks to Sony and Insomniac Games.

Marvel’s Spider-Man goes out of its way to not be an origin story, instead presenting a hero that’s already established. Most of New York City’s most nefarious criminals are already locked up, and so making a move to take down the notorious mobster, Fisk, in the opening moments of the game, Spider-Man thinks he’s going to be able to have a bit of rest. But of course, things don’t go to plan, otherwise this wouldn’t be much of a video game.

After years of exclusivity to PlayStation consoles, Marvel’s Spider-Man is finally available on PC, and what a treat it is. Like its PS5 counterpart, Marvel’s Spider-Man Remastered contains all post-launch content, including additional story missions and more. And thanks to a wide range of graphical settings and features, it can be tweaked to look and perform well on a variety of PC configurations. If your PC is competent enough, it can even look and play better than the PS5 version.

Featuring a large open world, the main reason why Marvel’s Spider-Man Remastered is a success is because it’s simply a joy to take control of the web-slinging hero. Swinging through the streets of Manhattan is intuitive, and you’re given enough options to keep it enjoyable even after you’ve been playing for 10, 20, or even 30 hours. 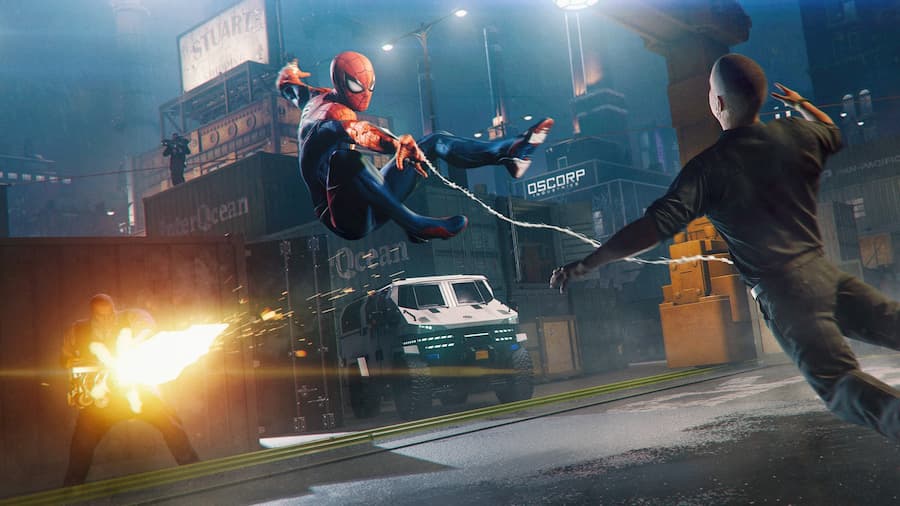 You can combine swings, pulls, dives and even tricks as you gracefully move through the air, peering down at the streets below where pedestrians potter around like ants. And while you can walk or run around the intricately-detailed alleys and sidewalks if you please, it feels a bit wrong doing so. Spider-Man simply belongs in the air.

That is, until it comes time to take down bad guys. Many missions will force you to abandon your web-slinging ways to instead stalk and stealthily incapacitate your opponents, or simply engage them in hand-to-hand combat. The fighting system here is pretty much ripped out of the Batman Arkham series albeit with an increased pace, with calculated attacks needing to be balanced with careful counters to build combos. Perform well enough, and you can use special takedown attacks to swiftly, and extravagantly, take down even the most hardest of foes.

The further you get into Marvel’s Spider-Man Remastered, however, the more geared up and skilful your enemies become. Bulky enemies, as well as those with guns, shields and more unique weapons will pose a serious threat, forcing you to rethink your strategies. Thankfully, Spider-Man can even the playing field with a list of unlockable skills, as well as a variety of gadgets that include web bombs and even a concussive device. 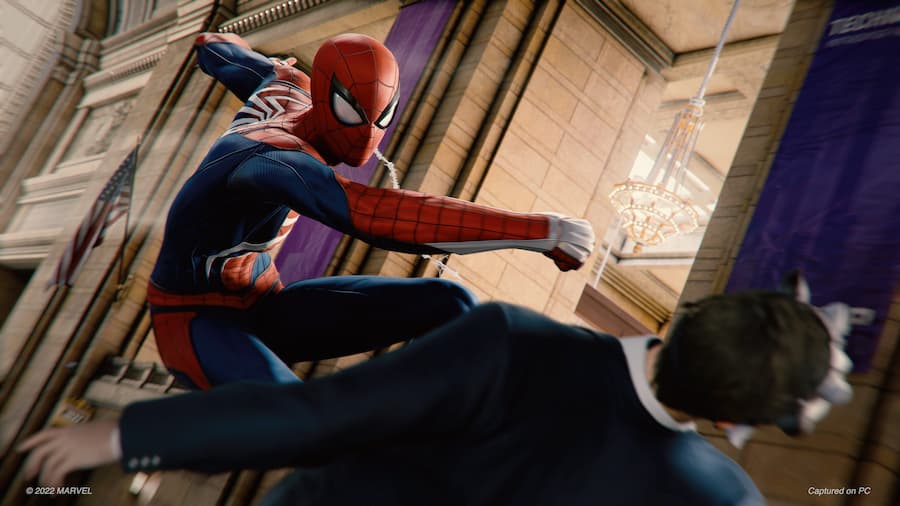 To facilitate all these extra skills and gear, the main story missions of Marvel’s Spider-Man Remastered are accompanied by a varied range of additional side missions and activities. Completing them not only rewards valuable XP, but also tokens that are required for developing your arsenal. There’s even a wide range of alternative suits to unlock for Spider-Man, which come with unique skills that can then be equipped regardless if which suit you wear, and multiple mod slots to tweak your capabilities to your liking.

It will take you a fair while to play through Marvel’s Spider-Man Remastered’s main story, especially if you keep getting distracted by side content along the way, which is likely. The additional story missions which were originally released as DLC can also be accessed from fairly early on in the game, fleshing out the world. It has to be said that not everyone will be enamoured with the game’s many side activities, though, with some of them such as crimes feeling repetitive from an early stage. 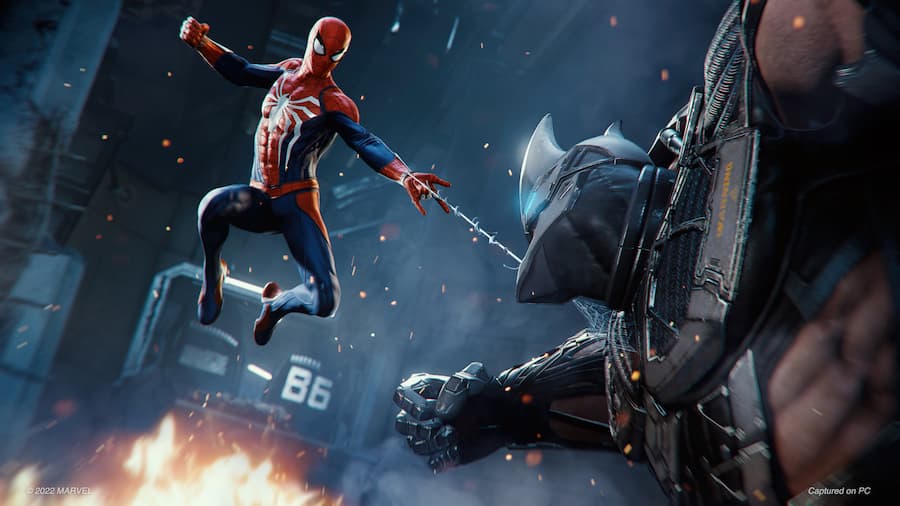 As ports go, Marvel’s Spider-Man Remastered is up there with the best of them. A wide range of graphical settings have been implemented, allowing players to tweak the visuals until they have a fine balance between fidelity and performance. There are options such as texture quality, shadow quality, and even field of view. Additionally, numerous scaling options are available, including DLSS. It’s the best scaling solution here, in fact, providing you can use it, producing sharper, clearer visuals than FSR 2.0 and the other available options.

With the settings cranked up to maximum, the PC version of Marvel’s Spider-Man Remastered unsurprisingly looks even better than it does on PS5. The difference isn’t night and day, but some textures look crisper and more detailed, and image quality is sharper. There are improvements when it comes to ray-tracing, too, but as ever, it’s costly. Most might want to settle for the medium setting, which still produces impressive results while not being overly taxing. And this is a game where you’ll want ray-tracing enabled, as it really adds to the ambience as you swing around and explore interiors abundant with glass and marble.

Topping everything off is not only mouse and keyboard but also DualSense support. So, no matter how you want to play you’re covered. Perhaps the only disappointment is that Marvel’s Spider-Man Remastered on PC loads a little slower than it does on PS5. Still, we’re talking a second or two here versus the near instantaneous loading times of PS5, so it’s not really something to be concerned about.

For PC gamers who are fans of everything Marvel, or at least the friendly neighbourhood Spider-Man, this PC port of Marvel’s Spider-Man Remastered is pretty much essential. It’s as fun becoming Spider-Man today as it was back in 2018, with his web-slinging antics wonderfully brought to life. Factor in the enhanced performance and visuals, as well as the wealth of content, and you have one of the best superhero games ever made.

This review of Marvel’s Spider-Man Remastered is based on the PC version, via a code provided by the publisher. It’s available on PC and PS5. 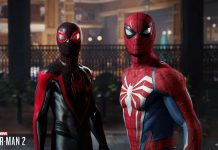 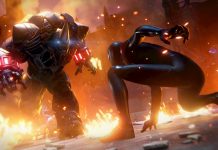 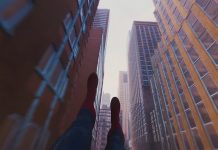