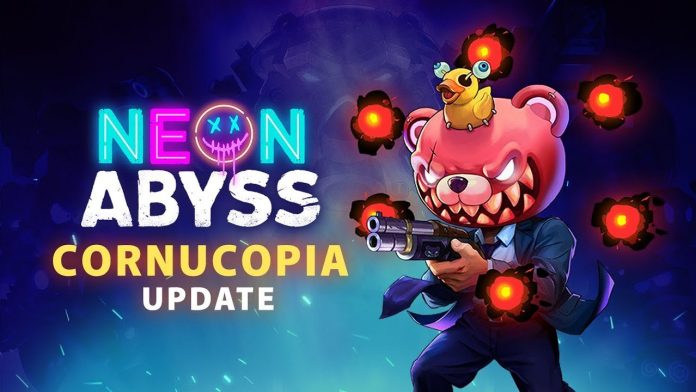 Are you a Neon Abyss player looking for a little more content? The Cornucopia Update could be just what you’re after.

Available right now, the update brings the console and Windows 10 versions of Neon Abyss up to the same level, content wise, as the Steam release. We reviewed this action-packed, over-the-top roguelike on Xbox and absolutely loved it, so we’re definitely up for more, especially since the update is free.

The update adds five new bosses, nine new levels, sixty new items, seven new weapons and various other quality of life tweaks and fixes. But that’s not all – there’s also piece of free content, dubbed “The Chrono Trap”. It’s been out since July on PC so, like the Cornucopia Update, it’s a case of consoles catching up. But while, right now, Steam purchasers have to pay for the content, it’s free on console and Windows 10 until August 30th.

As the name suggests, there’s some timey-wimey, wibbly-wobbly, abyssy-wyssy things going on with this content. There’s a new Endless Mode and a massive multi-stage boss battle against Chronos, the old time-meddler himself. So if you’ve got Neon Abyss on PlayStation, Xbox One, Nintendo Switch of Windows 10, get downloading before it’s gone.

In short, if you’re a non-Steam player who loved the hell out of Neon Abyss when it launched but haven’t tackled it this month, this update should give you a reason to dive right back in. Go on, the Abyss awaits.

Neon Abyss is available on PC, PS4, Xbox One and Nintendo Switch.