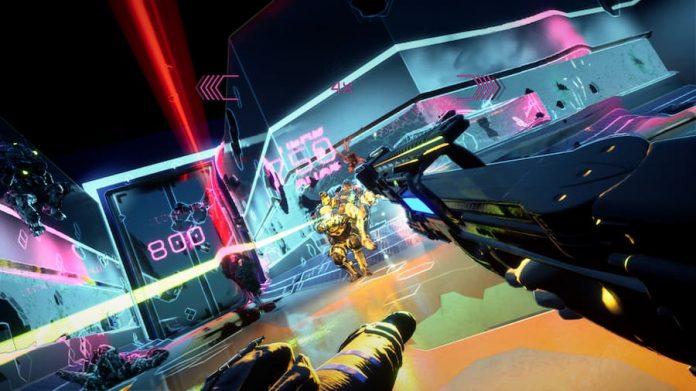 If you’re after an ultra fast-paced first-person shooter where you’re in control of a one-armed female protagonist, look no further: Severed Steel is the game for you.

Developed by Greylock Studio, Severed Steel combines sleek action with a dark, pulsating soundtrack. There’s little in the way of exposition here; while stills between chapters give you an idea of what motivates the game’s protagonist, Steel, the gameplay is largely left to speak for itself. All you essentially need to know is that Steel has a grudge to bear with a megacorporation called EdenSys, and she’s going to do all she can to bring it down.

Severed Steel‘s campaign mode finds you fighting against the forces of EdenSys as you make your way through the six chapters that are on offer, each consisting of numerous small levels. It’s never simply a case of making your way from point A to point B, however. Instead, each level has an objective to complete before you head to the exit. Your objective could be as simple as killing all enemies, but alternatively you might have to activate a sequence of switches, destroy certain objects, and so on. In any case, the variety of objectives keeps you on your toes.

When it comes to the actual gameplay, Steel’s agility is just one of the selling points here. Aside from running really fast, she can slide, wall run, double jump and dive; each is useful for overcoming the many enemies you face. Steel can also kick down doors, sending them flying into enemies behind them, and isn’t averse to kicking enemies directly if she’s close. In fact, kicking enemies is recommended if they’re carrying a riot shield, as it will open them up for further attack. Whether you want to put it down to adrenaline or the fact that she operates on another level, Steel can even slow down time, allowing you to more accurately place your shots as you dance around the environment. 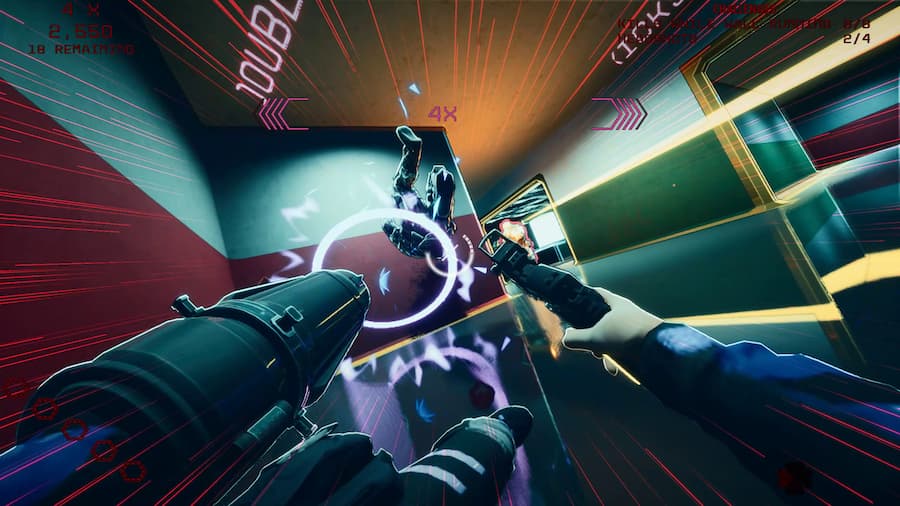 Another selling point of Severed Steel reveals itself shortly after you’ve begun playing. You see, Steel has another trick up her sleeve. Well, it is her sleeve, in fact. Upon finding a futuristic cannon, Steel uses it in place of her missing arm. It’s a game-changer. Aside from being useful for blasting at enemies, it can also be used to blast holes in the environment. Stood above an objective? Make a hole in the floor so you can drop down. There’s a target above you? Shoot the ceiling so they have no option but to fall into your arena. It’s very handy, and a lot of fun.

Ultimately, Severed Steel feels like a mix of Mirror’s Edge, FEAR and Superhot. It’s got athleticism, with you needing to keep on the move to sty alive. There’s smart enemy AI and impressive effects when using slo-mo. And when it comes to procuring weapons, your enemies are a gift. With ammo being limited, you’ll be happy that kicking enemies forces them to relinquish their weapons which you can then catch in mid air. Weapons that have been spent can also be thrown at enemies, staggering them for a short time while you either move in close or get out of the way. 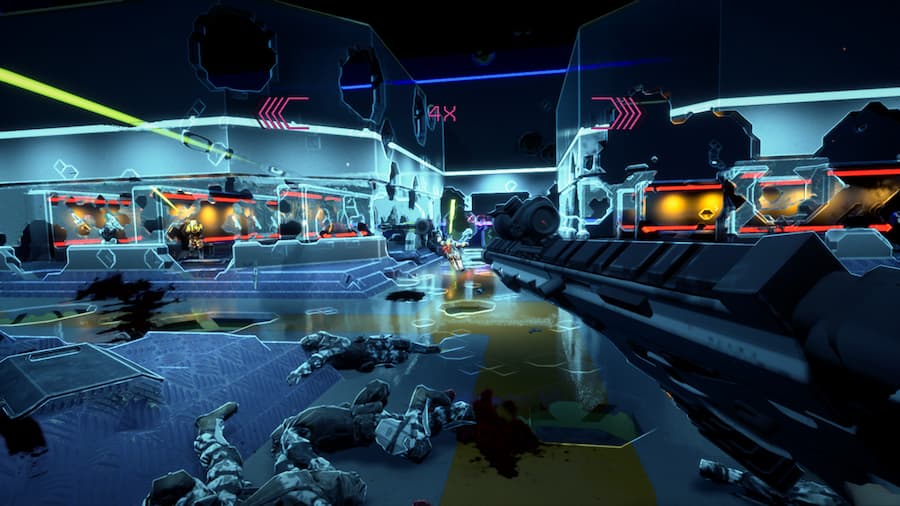 Playing on standard difficulty, the campaign of Severed Steel is likely to take you around three hours to complete. There are harder difficulties to tackle that will add to the playing time, however. There’s also a lot of replayability packed in. Jump into the arcade-like Firefight mode and you’ll find that there’s a huge number of maps to unlock, each with their own challenges to complete. As you make your way through them you’ll level up and unlock new weapons, arm cannons and Mutators, which can also then be used in the campaign. There’s New Game+, too, which ups the ante.

Severed Steel‘s campaign may be short, but it’s very sweet. And the high-octane nature of its action is intoxicating, meaning you’re likely to engage with firefight mode and perhaps even play through the campaign again with Mutators active. A single-player only experience, those who like waging war while feeling like a badass will be in their element here. It’s an absolute blast from beginning to end.

This review of Severed Steel is based on the PS5 version, with a code provided by the game’s publisher. It’s available on PS4, PS5, Xbox One, Xbox Series X/S, Switch and PC.