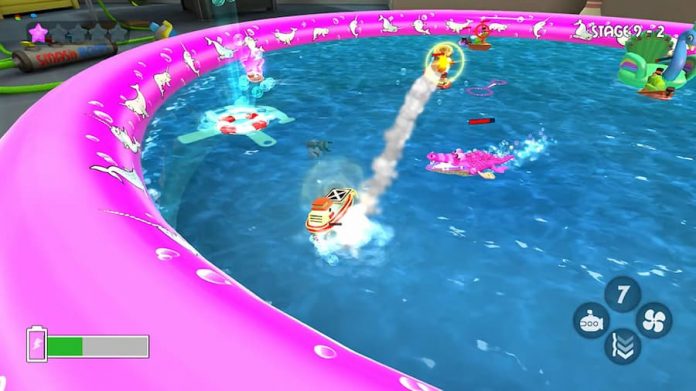 Smash Boats, an arcade-style boat-battler which debuted on the Nintendo Switch, is getting a local play update and an Xbox release.

Sure, playing online can be fun but there’s nothing quite like looking your opponent in the eyes when you crush their spirit. Thanks to an update arriving this August 18th, up to four Smash Boats players will be able to go head-to-head on a single Switch, glaring menacingly at other as they compete in the game’s various arcade-style activities.

That’s not to say you have to annihilate your opponent, you can also join forces in co-op mode; local co-op supports two players, while local head-to-head supports four. On top of that, there are three new party games coming as part of that same update, giving you more of an excuse to zap, ram and even bite other mini-vessels.

Don’t have a Nintendo Switch? Developer Smash House Games have revealed that the same day the Switch update drops, the game will also be coming to Xbox One as Smash Boats: Waterlogged Edition. We’ve yet to dabble in Smash Boats but the trailer is pretty striking, with some “boats” that would give the US Coastguard pause for thought.

The Xbox One version of Smash Boats arrives August 18th though local play is limited to the Nintendo Switch for now. You can buy the Switch release through the Nintendo eShop (priced at $11.99) and also take a free demo for a spin.