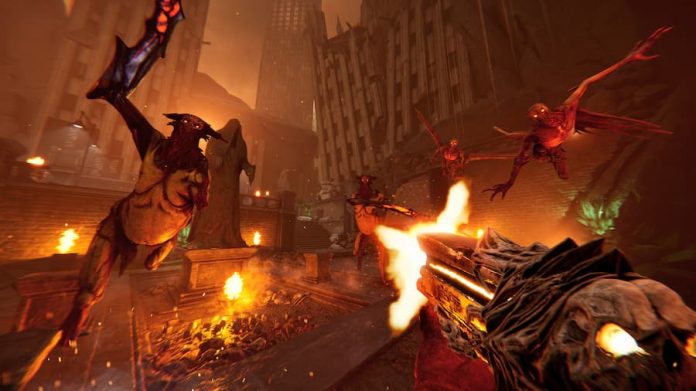 Metal: Hellsinger may be out but that’s not stopped developer The Outsiders from putting out another promotional video.

Surprisingly, it’s not ten hours of someone growling “BUY HELLSINGER” at the top of their voices. Though, given how much we loved Metal: Hellsinger, we could certainly get behind that sentiment.

Instead, it’s a relatively short but eye-opening video about how the rhythm-FPS came to be and how everyone got involved. Yes, there’s plenty of hard rock but there’s also a lot of talking head footage and the odd anecdote or two.

What’s surprising is how one of the game’s collaborations was down to family connections; Singer Mikael Stanne’s girlfriend happened to work with the mother of Hellsinger’s Nicklas Hjertberg. They reached out through that connection and the rest is heavy metal gaming history.

The video also relates how Nicklas Hjertberg and fellow composer Elvira Björkman were asked to perform at Gamescon. They agreed, not figuring they’d be in front of 3,000 or so people. And, as the concert drew closer, they realised what a big deal the concert was going to be. Kudos to them for going ahead with it and not running like the wind.

You can check the video out above and if you’ve not tackled Metal: Hellsinger yet, check out our review here. We remarked that if you’re “..a fan of metal music, hellish landscapes and fast-paced first-person shooter action, it’s safe to say that you’ll love Metal: Hellsinger.”