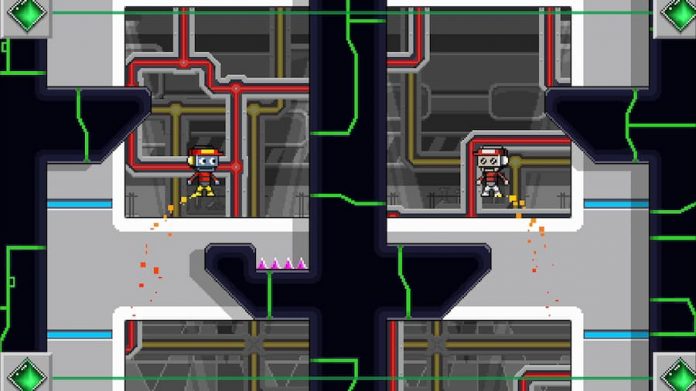 C.A.R.L., arriving on PC and console next week, is set to channel the 8-bit platformers of old.

There’s definitely a dose of Technician Ted in there as C.A.R.L., the titular protagonist, makes his way through a sprawling warehouse. You’ll have to defeat enemies, tackle puzzles, clear platforming hazards and deal with some terrible, terrible puns. And yes, that’s terrible by our low standards, so be warned.

You’ll also end up befriending other robots, abandoned when the definitely-not-sinister mega corporation decided they were defective. Coupled with an 8-bit soundtrack, C.A.R.L. could lead to some real retro-flashbacks. That said, it should contain some more modern trappings such as being save your game. We still remember having to complete games in one sitting or risk starting all over again the next day.

The good news is that it’s co-created by Youtuber Andrew Kenady, better known as Nintendrew. Why is that good news? Because after five years of making retro-themed videos, he should have a solid understanding of retro-gaming. Adorable robot protagonists? Yes, please. Losing eight lives in a row because you get teleported back to the top of a fall? No thanks – we’ve never forgiven Jet Set Willy for that.

C.A.R.L. arrives next week, September 29th, on Nintendo Switch, Xbox, PlayStation, and PC, priced at $14.99, with a launch-week discount on Steam and Switch. You can check out the above trailer or wishlist it on Steam here.