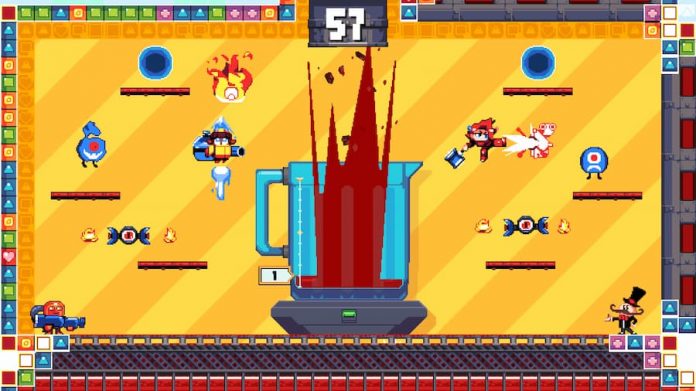 Aliens have invaded earth, and all hope rests with a robot.

That robot is Blue, and being equipped with chainsaws for arms, it’s clear that negotiation isn’t on the agenda. Instead, it’s up to Blue to battle through a handful of challenging stages, eliminating aliens while assembling what will come to be known as the Chenso Club.

On a surface level, Chenso Club is very much like your typical action platformer. Blue has a standard set of abilities that includes standard and special attacks, as well as jump and dash. They can be chained, too, allowing you to take the action to the air and remain there if you’re skilled enough. And that’s something you’ll want to do, as many of your enemies are airborne.

The twist here, though, is that Chenso Club has roguelike elements. That is to say that as you battle your way through its stages – which are each split into numerous levels consisting of a few screens – you acquire power ups. And if you die, you lose all of those power ups and have to start at the beginning of the stage you reached. If you want to make your character as strong as possible in hope of beating the game, you might even want to restart from the very beginning. 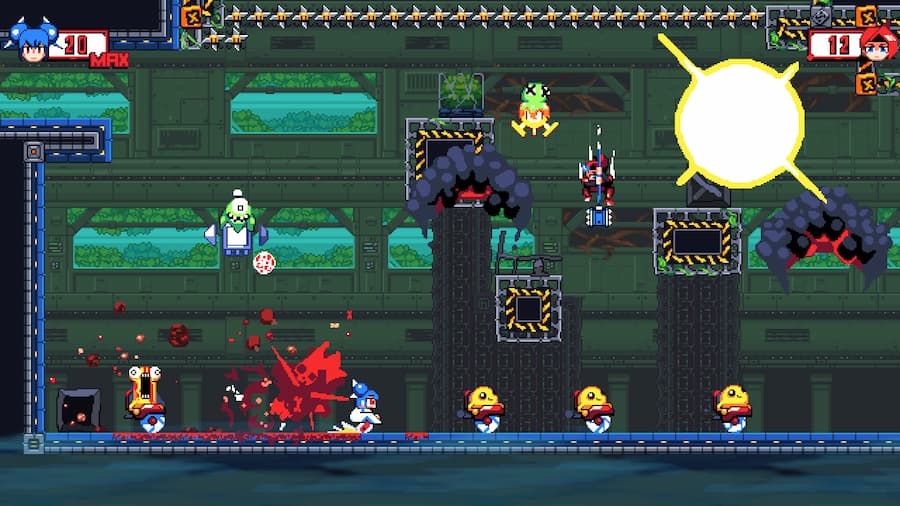 All the other trappings of a roguelike are here, too: randomised levels, for example, as well as shops that sell an ever-changing selection of upgrades, and random encounters that result in you being offered challenges with increased rewards. Needless to say, no two playthroughs will be the same. And that’s before you consider the additional characters that are on offer. You’ll unlock them as you play, and each has their own stats and moveset.

If only Chenso Club was more fun to play, however. As it is, it’s simply too chaotic to truly be enjoyable. The majority of screens in the game are basically combat arenas, and when they’re full of numerous enemies, the projectiles they fire and traps, it can become overwhelming. Compounding the issue is the fact that the controls generally feel like they’re fighting against you, being somehow both twitchy and floaty. In a challenging game like this, it’s a major issue.

Thanks to a range of additional power-ups you can unlock by collecting friends and spending coins, Chenso Club does thankfully get easier over time. Numerous difficulty levels are available, too, with the easiest giving you an ample amount of health to make your way through the game without much issue. Well, as long as you don’t go mad in the shop: your health is your currency, and it can only be replenished by collecting the blood of your enemies.

If you’re in the market for a new challenging roguelike and appreciate colourful pixelated visuals, Chenso Club might be worth checking out. It’s likely to frustrate from time to time though, thanks to one reason or another. And so while you might gleam some fun out of it, it’s hard to whole-heartedly recommend.

This review of Chenso Club is based on the PS4 version of the game, via a code provided by the publisher. It’s available on PS4, Xbox One, Switch and PC.