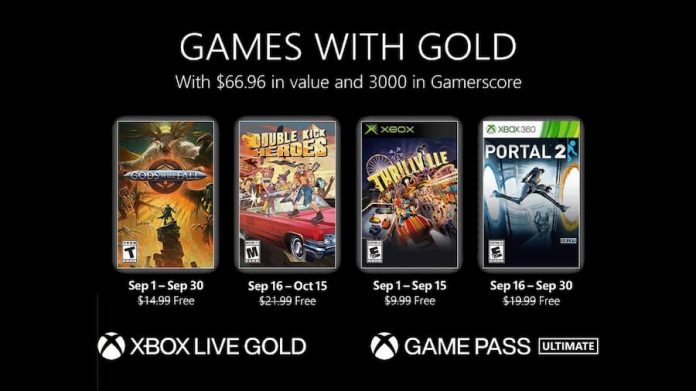 It’s the end of an era – September’s Games With Gold line-up is the last to feature any Xbox 360 games.

We’re not going to shed a tear, however. Sure, there are some fantastic Xbox 360 games out there and we’ve had a good few for free, thanks to Xbox Live Gold’s monthly Games With Gold line-up. But as time went on, those 360 offerings became less appealing and started feeling an awful lot like filler.

So we’re happy that at least one of this month’s 360 titles is an absolute smash. See if you can guess which one we’re talking about. As is the case with PlayStation Plus’s Extra tier, these games have to be claimed within a month or less, unlike Game Pass games which stick around longer. But once you’ve claimed then you can re-download them at your leisure.

Here’s what’s on offer this month:

So are these worth playing? Gods Will Fall is a fun rogue-lite, which is worth dabbling in. And if you’re to post-apocalyptic games, you can’t go wrong with a rhythm game set after the apocalypse.

Thrillville? Not so much. It’s not necessarily a bad game, there’s fun to be had, but Planet Coaster is a superior title and we’ve already had the sequel, Thrillville: Off the Rails as a Games With Gold title.

But Portal 2 – lovely, lovely Portal 2.. that’s the title that really shines here. It’s tangentially connected to the Half-Life franchise but it’s a brilliant game in its own right. Armed only with a gun that creates interconnected portals, you’ve got to take on a rogue AI and then.. well, we won’t spoil it for. But if you’ve never dived into the wonderful world of Aperture Science, you’re in for a real treat.

As for September’s Game Pass games? You can expect Microsoft to reveal the first wave shortly – watch this space. And next month, Xbox Live Gold subscribers can look forward to four Xbox One Games With Gold games.