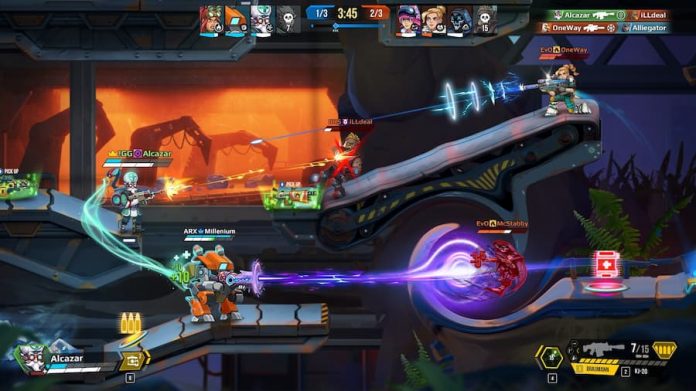 SquadBlast, a multiplayer shoot-em-up that takes place in a 2D plane, has launched a free-to-play playtest in Europe.

The secret lovechild of Metal Slug and Super Smash Bros, SquadBlast sees you blasting away at a human foes across as you roam several side-on levels. Imagine Overwatch, but without the first-person perspective (SquadBlast also uses class-based heroes) and you’ve got the idea.

There’s a story, crafted by former Westwood Studios writer Rick Gush, which resolves around the hunt for valuable crystals. But what’s really interesting about this is, since it’s 2D, you’ve got a much better chance of blasting an opponent in the face. Yes, someone might snipe you to death in Modern Warfare but SquadBlast is unlikely to give anyone time for camping.

In short, despite developer Ultrahorse calling it a tactical shooter, you can look forward to it being or frenetic than most. So how do you get your hands on SquadBlast and dish out some 2D damage? Aside from being in Europe, you need to sign up to receive a Steam key. That’s just a matter of filling in this form here and, going by the wording on SquadBlast’s site, you’re guaranteed to get one.

The playtest runs from now until October 9th and while it’s PC only for now, Ultrahorse plan on porting the the game to consoles later down the road. There’s no solid release date but if you want a multiplayer shooter you can dip in and out of it SquadBlast could well be worth a look.