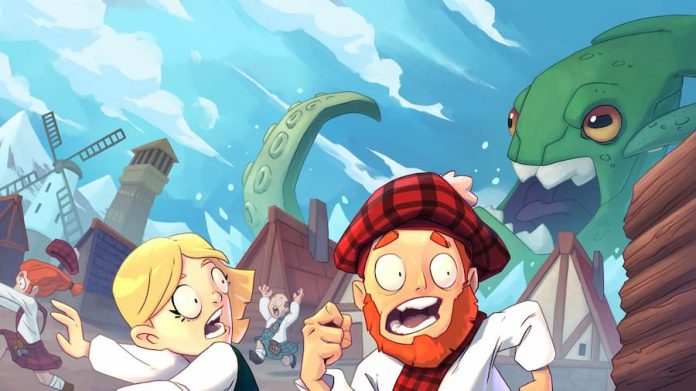 In my first half-dozen attempts at These Doomed Isles, my isles were, indeed, doomed.

Coming in 2023 from Mable & The Wood developer Triplevision Games, These Doomed Isles is a roguelike city builder that tasks players with building up a thriving community using only cards that are in their hand. You’ll need to build up a strong workforce – and that means building homes for them to live in, woodland for them to fell trees, sources of food, somewhere to generate gold, and more. Having a working economy is enough of a battle – but then you’ve got the threat of invaders to contend with.

You’ll have barely ensured your tiny island has enough food before you get warning of an incoming invasion. If you’re lucky, you’ll get the chance to grab a defensive or offensive card before it’s too late. But maybe you won’t. Or maybe you will, but you won’t have enough gold to build it. Then pretty much all you can do is watch as invaders come and raze your beautiful little village to the ground. It’s rather depressing to see unfold, actually.

But These Doomed Isles is very much a game of trial-and-error. You’re going to fail time and time gain while you learn the ropes. That’s part of the fun. And that one time you do manage to survive into the double-digit years, building up your civilization as you go – it feels great. And knowing you’ll be ready for the invaders when they land on your shore? It’s a thrill. 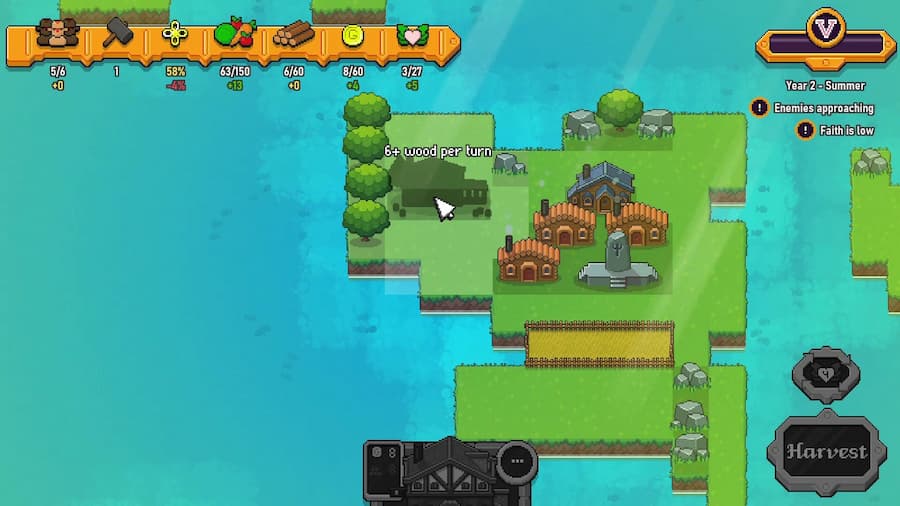 Based on the preview build we’ve had our hands on, These Doomed Isles feels just as much luck-based as it is skill-based. Isn’t that the way with any roguelike game, though? You can have all the strategy in the world, but if you don’t get the cards you need, you’re absolutely at the mercy of the game. It’s about learning to make the most of what you have got, and eventually knowing which cards are more beneficial to you each time you get the opportunity to add new ones to your hand.

That opportunity comes around every four turns – with every turn representing a season. Each season, you can play up to four cards, but they’ll often have a cost associated with them. You’ll need wood and gold to construct most buildings, for example. And planting trees or expanding your island requires faith. Play your cards right (quite literally), and you’ll be automatically generating all the resources you need each turn. But it’s easy to run low. Wood requires a harvester: run out of trees around the harvester’s hut’s boundary and your building becomes useless. Same for gold: place a goldmine near rocks, and you’ll generate gold. But if those rocks deplete, there goes your source of cash. And you’re at the mercy of the game whether a card allowing you to place more rocks comes up.

And so, These Doomed Isles can be rather frustrating when it feels like nothing is going your way. But with play so fast-paced, it’s very easy to jump back in again, and each time you do you’ll be a little more determined to succeed.

We’re looking forward to playing more These Doomed Isles, but we’ll have to wait until summer 2023 to get our hands on the full release. If you fancy trying it out for yourself in the meantime, there’s a demo available on Steam right now.