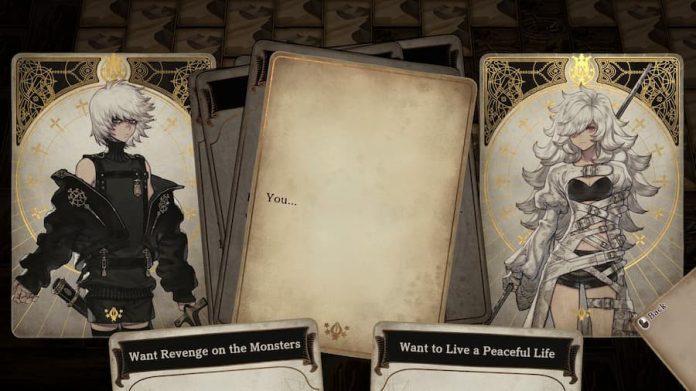 The third instalment in Square Enix’s Voice of Cards in less than a year has arrived, offering a more compelling experience than ever.

Three games in one series in 10 months? It’s practically unheard of, but Square Enix has pulled off the impossible. Starting with Voice of Cards: The Isle Dragon Roars in November 2021, we then had The Forsaken Maiden in February and now Voice of Cards: The Beasts of Burden. What’s unusual is that these games form a series, but they offer standalone adventures with their own unique stories. But in terms of gameplay, they all play and feel the same.

It means that, if you were to play all three in quick succession, you may get rather bored with the format. Presented like a card-based tabletop RPG, the action of the Voice of Cards series is narrated to you by a Games Master. Moving around its ‘world’ means moving a game piece over laid-out cards, which turn face-up as you move over them. Battles and narrative blend together seamlessly and, with each game lasting six to eight hours on its own, they offer a perfectly proportioned unique adventure. But back to back, it’s possible you could get fatigued with the lack of real action.

Being six months since we jumped into The Forsaken Maiden however, we were well primed to pick up Voice of Cards: The Beasts of Burden. Stepping into it felt very much like putting on our favourite cardigan for the first time that season: familiar, welcoming, comforting. There’s a new narrator, taking on the role of the Games Master, who does a fantastic job of absorbing you into the game’s magical world. But everything else feels just as you left it. For that reason, it seems odd that tutorials and introductions are still forced upon all players: the option to skip would be welcome. But they’re at least brief and, if it has been a while, a refresher doesn’t hurt. 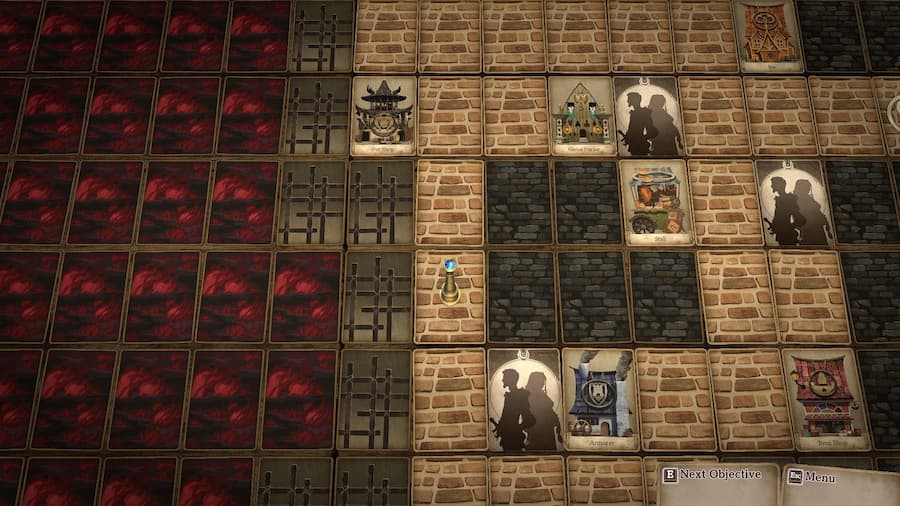 You’re thrown straight into the action in Voice of Cards: The Beasts of Burden, taking on the role of a young girl who has grown up in an underground village. She longs to see the sky, but with monsters pervasive in the world above, her home deep under the Earth is a safe salvation she can’t leave. That is, until monsters break the defences, destroying everything and everyone in her village. So begins a tale of revenge and adventure as she sets out to the surface, venturing into a world she knows quite literally nothing about.

Of course, with monsters being so prevalent, you’re going to spend quite a lot of your time engaging in combat. As you explore The Beasts of Burden‘s card-based world you’ll encounter frequent random battles – and as you’d expect, these also play out via the medium of cards. Each character has their own set of cards representing attacks. Standard attacks can be dealt for free, although as you progress you’ll acquire cards offering up special actions, dealing more damage or status effects.

Each time you play, you’ll gain a gem, which need to be spent to play certain cards. The more powerful a card/attack, the more gems it will cost – and so being strategic is often key, especially when you’re facing off against bosses or a particularly fearsome beast. It may be tempting to spend your gems each time doling out slightly powerful attacks. But saving them up to unleash a grand attack could be the difference between life and death.

Rather than being typical magic attacks, your more powerful cards in The Beasts of Burden allow you to utilise monsters you’ve felled previously in battle. You see, your protagonist has a special ability to control beasts. It’s not exactly Pokémon where you can attempt to capture any adversary; rather, the cards you receive are largely tied to the story (or found randomly in chests and given as rewards). But it at least offers a bit of variation from the battle systems of previous Voice of Cards games.

If you enjoyed The Isle Dragon Roars or The Forsaken Maiden, you’ll undoubtedly love Voice of Cards: The Beasts of Burden just as much. If not more. The narrative on offer here got its hooks in us right off the bat, and following our interesting protagonist on her journey has been a joy. The presentation, narration and visual design is just as beautiful as ever, too. It may simply be more of the same, but we’re so glad the Voice of Cards series continues to exist – and to shine.

Voice of Cards: The Beasts of Burden Review – GameSpew’s Score

This review of Voice of Cards: The Beasts of Burden is available on PS4, Switch and PC. We reviewed the PS4 version of the game via a code provided by the publisher. 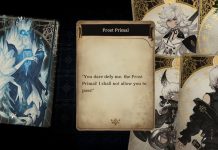 Voice of Cards: The Beasts of Burden Will Continue Square Enix’s Card-Based RPG