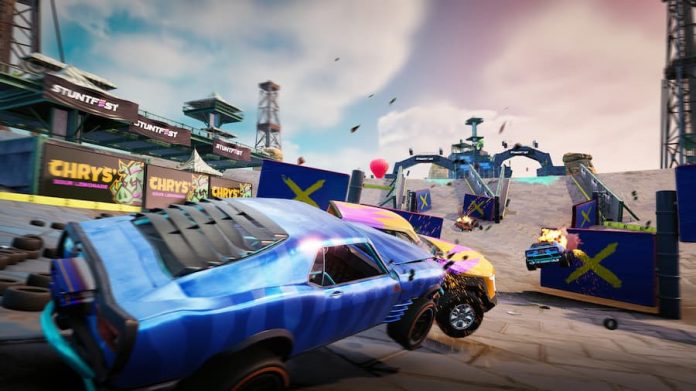 No, Stuntfest – World Tour is not a sequel or follow up to Wreckfest.

Developed by Pow Wow Entertainment, the brand of high-octane action that Stuntfest is set to offer when it launches in the near future is very much a different beast than what Bugbear currently offers with its brilliant destruction derby-style racer. Though they do both have one very important thing in common: they want you to have vehicle-based fun.

Jump into Stuntfest, and you’ll find that you’re free to explore a large open world. But this isn’t an open world game. The world here is essentially a lobby, and once you’ve finished larking around and are ready for some serious action, by driving to various points you can begin the matchmaking process to take part in a championship. Though until a full grid of competitors are located, you’re free to continue your ridiculous exploits.

Championships are the real meat of Stuntfest. Enter one, and you’ll play around a handful of events spread across in-game days. And you’ll not simply be racing. Some events will have you driving down a ramp before ejecting your driver, seeing how far you can make them travel. Bounce pads and the ability to nudge yourself mid-air help you in that endeavour, as well as a drone you can whip out to carry you a little further. Other events will have you driving through gauntlets before ejecting your driver, with the aim of hitting distant targets. 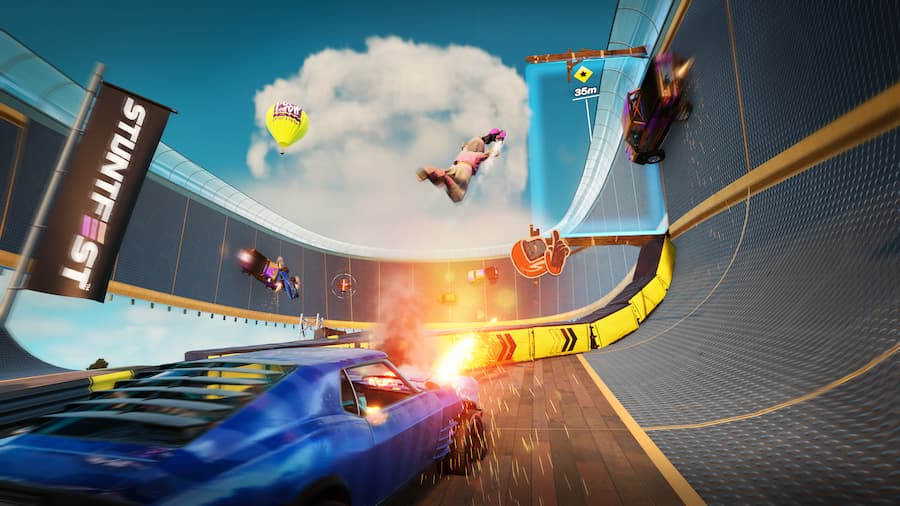 Even the more standard racing events have some flair. Stunt races, for example, have hazards like spike rams and moving boards for you to avoid. They’re also filled with alternative cars for you to claim, should you fail in executing a risky shortcut or simply fancy a change. Then there are jet pack races; here, aside from navigating through tricky checkpoints, you’ve got to worry about fuel. Destruction derby-style events make the cut too, but these are hit and miss. Sometimes they’re fun, other times, everyone drives around like a maniac and little contact is made.

At the end of each event you’ll earn points based on your position, and the player with the most points at the end of the championship is declared the winner. The best of the best. You’ll hope that it’s you, but you’ll have had so much fun along the way that you’re not likely to care if you lose. You’ll just jump in for another go. And that’s the joy of Stuntfest, it seems. It’s just fun to dive in and see how you do.

Ultimately, it’s the zany nature of Stuntfest that is likely to win you over when it launches. Things like the fact you can eject yourself from your vehicle when approaching a gap in the road, then when in the air, adjust your position before summoning your vehicle to you just before you land, allowing you to carry on your merry way. Add boost into the mix, and you have an arcade racer slash car combat slash stunt game that’s fun every step of the way.