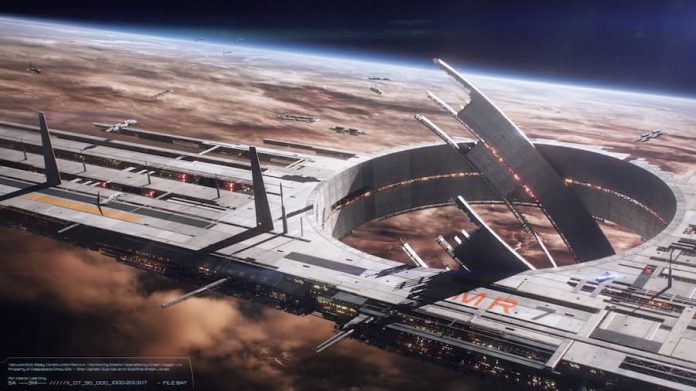 Mass Effect 4 is… still a long way away. But to whet our appetites, BioWare has released a teaser video, hinting at the game’s story.

The teaser, which is almost certainly for the next Mass Effect, features Liara T’Soni, a major character and sometime NPC from the original space-RPG trilogy. The original was an image, accompanied by some scrambled audio. But, after a major burst of effort, Twitter-based Mass Effect fans managed to decode and isolate the speech.

The teaser was released to commemorate N7 day; N7 is an in-game military rank and so, November 7th has become Mass Effect day. When decoded the audio is revealed to be an exchange between Asari scientist T’Soni and a Geth, one of the trilogy’s antagonists-turned-allies.

Punctuated by unintelligible replies from the Geth, T’Soni states:

“I can see it. How did we miss this? Exactly. The council will be furious although they should know by now not to underestimate human defiance. It always was their most defining trait.”

Mass Effect fans have already started analysing the angles, numbers, symbols and so forth on the image which resembles one of the game’s Mass Relays. We’re not going to go that far though it’s worth noting that it looks a different from your run-of-the-mill relay. So what’s going on?

Thank you to all the agents who decoded the footage. Here’s a clean transmission 👀 https://t.co/iADrTHnU6s pic.twitter.com/ALNBNNM05a

Our take is that humanity, or some human organisation, has taken to modifying Mass Relays or even building their own. And, given Tsoni’s dialogue, it’s clear neither she nor the council were aware of these trans-stellar shenanigans.

We’ll have to wait a while to find out if we’re right. Mass Effect 4, or whatever BioWare end up calling it, is in the works but there’s no release date in sight. You can expect BioWare to drop a few more teasers as development moves along – we’ll keep you posted if we hear more.