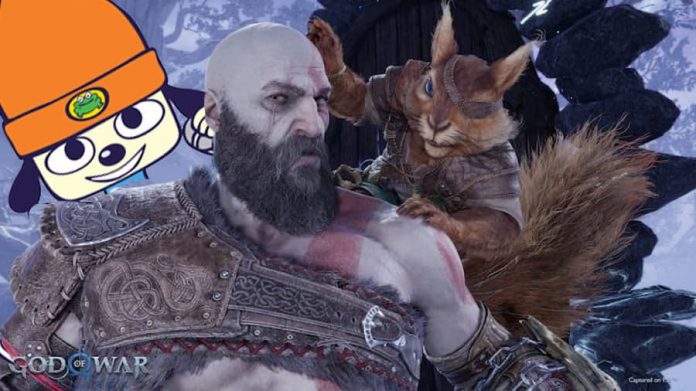 Remember when Kratos beat the living daylights out of Nathan Drake? God of War Ragnarok definitely does.

If, on the other hand, you don’t remember and wonder just how it fits into God of War Ragnarok, we’ll enlighten you. PlayStation All-Stars Battle Royale was Sony’s attempt at making a Super Smash Bros. style platform brawler. It was released in 2012 and saw a variety of Sony PlayStation characters beating the living daylights out of each other including Nathan Drake, Sackboy, Parappa the Rappa and.. God of War’s Kratos.

It wasn’t the smash Sony hoped for and, with no sequel released, it remains a curious relic of the PlayStation 3 and PlayStation Vita days. But a short scene from God of War Ragnarok has confirmed that it definitely happens, cementing PlayStation All-Stars as canon. Well, blue-tacking it as canon, at least.

The scene, recorded by Twitter user The Other Red Prophet, has Mimir asking Kratos about his alleged participation in the tournament. And while Mimir doesn’t namecheck each participant, referring instead to a scoundrel, beasts, a princess on so on, it’s clear what’s he’s referring to.

Kratos’s reply, instead of outright dismissing it as fantasy, is simply “I would not speak of this.” The conversation also confirms that Parappa the Rappa is the world’s greatest musician, so while Kratos and Atreus are facing Ragnarok, one beanie-wearing dog is rapping his heart out. Probably.

If you’ve yet to tackle God of War Ragnarok, available on PS4 and PS5, you can check out our review here. As for PlayStation All-Stars Battle Royale, it’s yet to grace PlayStation Plus, unfortunately. So,  picking up a second-hand copy, along with a second-hand PlayStation 3, is the only real way to experience it. Maybe we’ll get a sequel when the PS6 rolls around.