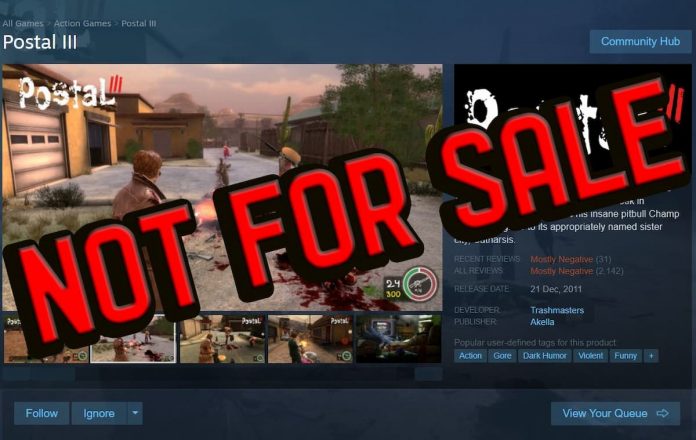 Postal 3, originally released in 2011, is no longer available from the Steam Store and given its reputation, that’s probably a good thing.

That might sound harsh, but Postal 3, or Postal III to give its official title, was actually disowned by Running With Scissors who “co-developed” the game and developed the previous two titles in the over-the-top shooter series.

If you’re wondering why co-developed is in quotes, there’s a whole story behind that. The short version is that Running With Scissors outsourced the game to Akella, a Russian development company. However, the company in question didn’t do so well with the game, despite having produced several other titles.

Back in 2013, Running With Scissors community manager Jon Merchant remarked in this interview:

“The game is a broken mess and should not be sold. We stopped selling the game ourselves some time ago when it became apparent that neither us or the community would get the SDK tools. We don’t regard it as the third POSTAL game, just a dodgy spin off that should never have happened.”

Akella, while technically not bankrupt, hasn’t produced a game since 2012. The game remained on Steam but, recently, DRM issues arose with the title. RWS took the decision to remove the game from Steam so the game is no longer officially available.

As for the future of the series, Running With Scissors have developed and released Postal 4 : No Regerts this April, after a period of Early Access. It’s available on Steam though we should warn you, the Postal series is something of an acquired taste.