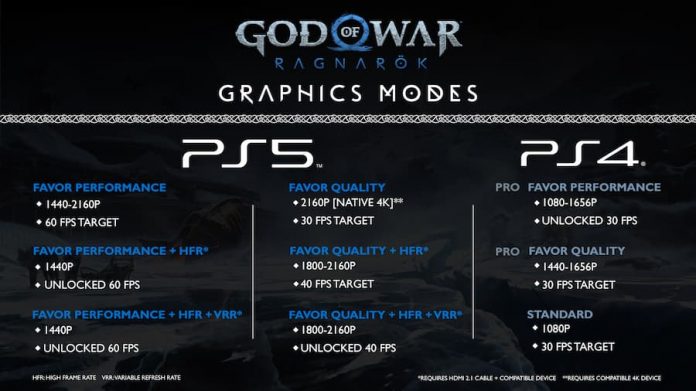 Wondering how beautifully or how smoothly God of War Ragnarök will run on your console? Sony have shared all.

We say “all”, but Sony won’t be saying about the God of War sequel’s ending. In fact, developers Sony Santa Monica have expressed their disappointment that spoilers are floating about and have advised people to steer clear. But you’ll have an idea of whether your console can run God of War Ragnarök at 60FPS and how appealing the various graphics modes will be.

Because, while it may be a PlayStation exclusive, you can play the game on three differently-specced consoles, the PlayStation 4, PlayStation 4 Pro and PlayStation 5. So, then, what kind of performance and/or graphics modes should you expect from each respective version?

PlayStation 4: PS4 owners only have one mode, there’s no choosing between FPS and fidelity. The vanilla PS4 version targets 30FPS (though that’s not a guarantee) running 1080p.

PlayStation 5: If you’ve got a PS5 you can, again, choose performance or quality mode. Quality targets 30FPS in native 4K, while performance targets 60FPS in 1440P. However, there will also be multiple other options including variable refresh rate and high frame rate.

So what does this mean? Basically, it means that, on anything higher than a PS4, you should try different modes to see what suits you. God of War Ragnarök promises to be quite a frenetic, monster murder-heavy game, so you may find 60FPS more suitable for general use. However, if you just want to admire the scenery, choose one of the quality-based God of War Ragnarök graphics modes.

God of War Ragnarök launches 9th November on PS4 and PS5. Come back for our full review today, 3rd November, at 9AM PDT / 4PM GMT.