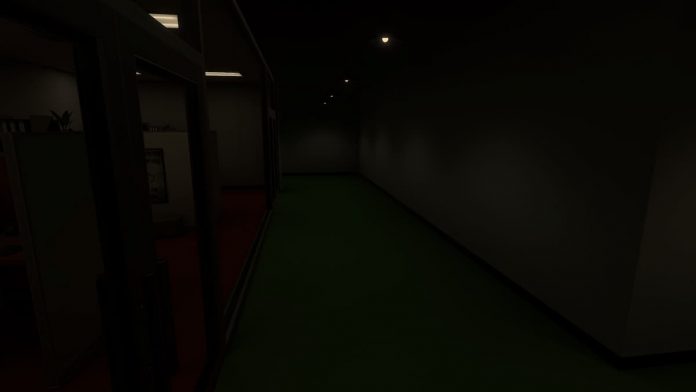 Project Nightlight, hitting Steam VR next year, makes you one of the unluckiest security guards ever. And yes, we are including Five Nights at Freddy’s.

In Project: Nightlight, you’ve been tasked with patrolling a building that belongs to The Department, an organisation that handles the strange and supernatural. From the few screenshots we’ve seen it’s not as sprawling as Control’s organisation, but their offices are big enough to be eerie at night.

Will things run smoothly? Of course not. There’s something called “The Artifact” that must be protected all costs, but someone has been messing with things. So a “distressed co-worker” – who definitely isn’t going to turn out evil, honest – directs you how to handle things.

Developer Fringe Realities promises that the game will make good use of VR, delivering:

“..a whole new level of immersion thanks to the unique capabilities of virtual reality. The game allows the player to interact with objects with an acute attention to real-life accuracy, such as handling bolt cutters or melting locks with a blowtorch.”

It certainly sounds intriguing, but not because there’s anything new using objects in VR – other games let you meddle with tools and so forth, certainly. What’s got our attention is the claim they’ll be accurate to real-life, compared to, say the movies.

Why? Because we get a kick out of watching shows like Mythbusters and watching them try something from a film, shooting a lock off, for example, and having the myth busted. We’ll be eager to see whether this does away with some of Hollywood’s more unrealistic tropes.

We’ll have to wait a while, however. Project: Nightlight isn’t due for release till the first quarter of next year. I’ll be hitting PC, via Steam VR, and you can wishlist it on Steam here.