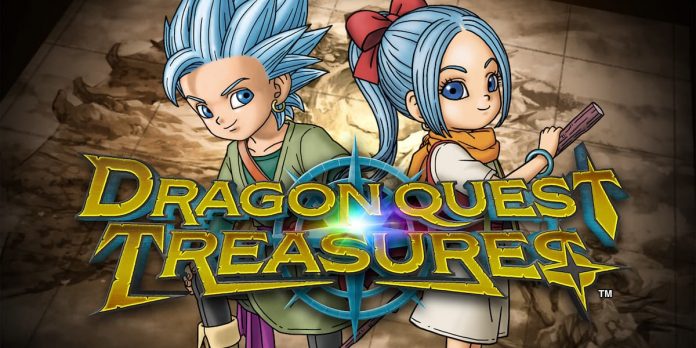 Hunting for treasure in an RPG is nothing new, but the way Dragon Quest Treasures does things is a little different.

For starters, the treasure you’re hunting isn’t loot: you won’t find weapons, armour and accessories you can equip, for example. In fact, you can’t do anything with the treasure you find other than look at it. Simply having treasure is the whole point of Dragon Quest Treasures because, you see, the more your trove is worth, the more powerful your party becomes.

And so, going out and exploring Draconia – the series of islands that make up the world of Dragon Quest Treasures – and finding valuable treasure is your main goal. As your treasure trove’s value increases your party will gain new buffs, and your ability to find rarer, more valuable treasure grows.

But simply hunting for treasure could get a little stale on its own. And so, Dragon Quest Treasures throws a whole host of quests at you too. Six categories of quests, in fact. There are daily quests; simple tasks that’ll net you helpful rewards every day. Then there are bigger quests that will see you bringing back new people to your base camp – shop keepers and ammo makers, for example. There’s also the task of restoring power to a series of train stations dotted across Draconia, allowing you to travel more easily across the world. Along with fighting off rival gangs, exploring all the nooks and crannies of Draconia and taking down powerful monsters, there’s an awful lot to do in Dragon Quest Treasures. 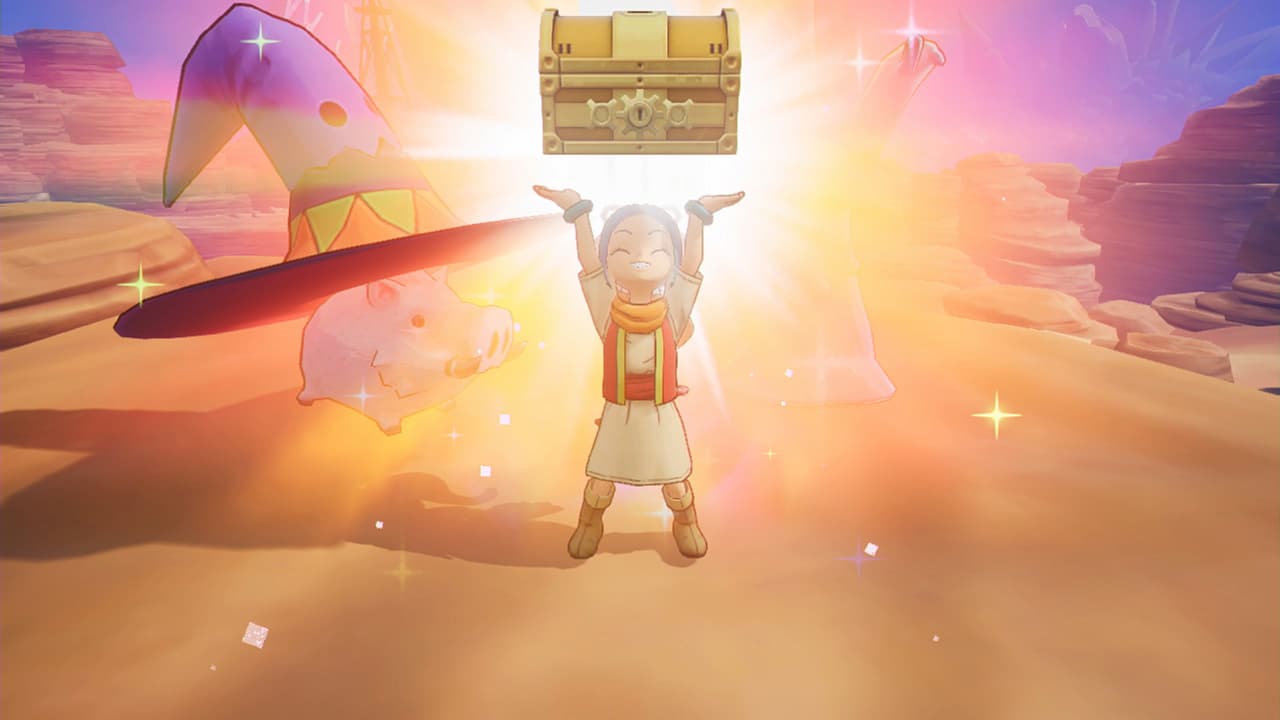 Perhaps too much: it’s easy to get overwhelmed, in fact, when you head into your menu and see just how many quests are waiting for you. But the joy of Dragon Quest Treasures is that you can tackle things in just about any order you wish. The main campaign initially tasks you with increasing your treasure level, and that simply means going out and finding more and more treasure. But as you’re out hunting, maybe you’ll decide to go via a quest marker. Or maybe you’ll simply wait and see if any quest crosses your path. The choice is yours, really. But the more you put into Dragon Quest Treasures, the more you’ll get out of it.

There’s a scavenger hunt element to finding treasure, making it a little more interesting than simply coming across a chest and opening it up. At any time, you can use a compass to point you in the right direction. When you’re close, your party of monsters will alert you, and when you’re really close, they’ll share with you visions of where the treasure is hidden. You’ll need to search for the precise location in the environment, then dig it up. You won’t know how much your treasure is worth until you get back to base.

Of course, Draconia is teeming with monsters to fight and rival gangs also vying for the same treasure, so hunting is never straightforward. It’s very easy to wander into an area habited by monsters that are much higher level than you – and should your party die, you’ll lose anything you’ve collected on that run. Fighting monsters is worthwhile, though. You’ll of course gain experience as you go, and you’ll also recruit new monsters to join your own party. The three monsters you have by your side are completely your choice: maybe you’ll stick with the same three from beginning to end – they do level up alongside you – or maybe you’ll chop and change as you acquire new potential members.

The monsters in your party aren’t just there for fighting, either. Each monster has a useful skill that can help you traverse the world of Draconia. Flying monsters can fly you large distances, for example, while slimes can propel you into the air, helping you climb up tall ledges. There are also monsters who can dig down, and others who can run really fast, helping you cross the map in record time. You’ll need to make use of all their abilities, and so having a varied party is very useful. There is a lot of verticality to the islands of Draconia, and so getting from A to B can often be a bit of a platforming puzzle. Using your monsters’ abilities certainly makes things easier.

One thing that perhaps does let the experience down somewhat is Dragon Quest Treasures’ combat. It’s hectic and unnuanced: while you control your own character, your monsters act independently, and so trying to keep up with the action on-screen can be tiring. It also means that you might be swinging for an enemy just as one of your party comes and knocks them out of the way. You only have one melee attack, so there’s not much room for skilled fighting.

You do have a slingshot, however, which can be loaded up with a host of various pellets. Some do minimal damage to an enemy, while others can cause fire damage, or stun enemies. Some can even be used to heal your party members. It’s a useful tool to have up your sleeve and making good use of it against more powerful enemies can mean the difference between life and death. 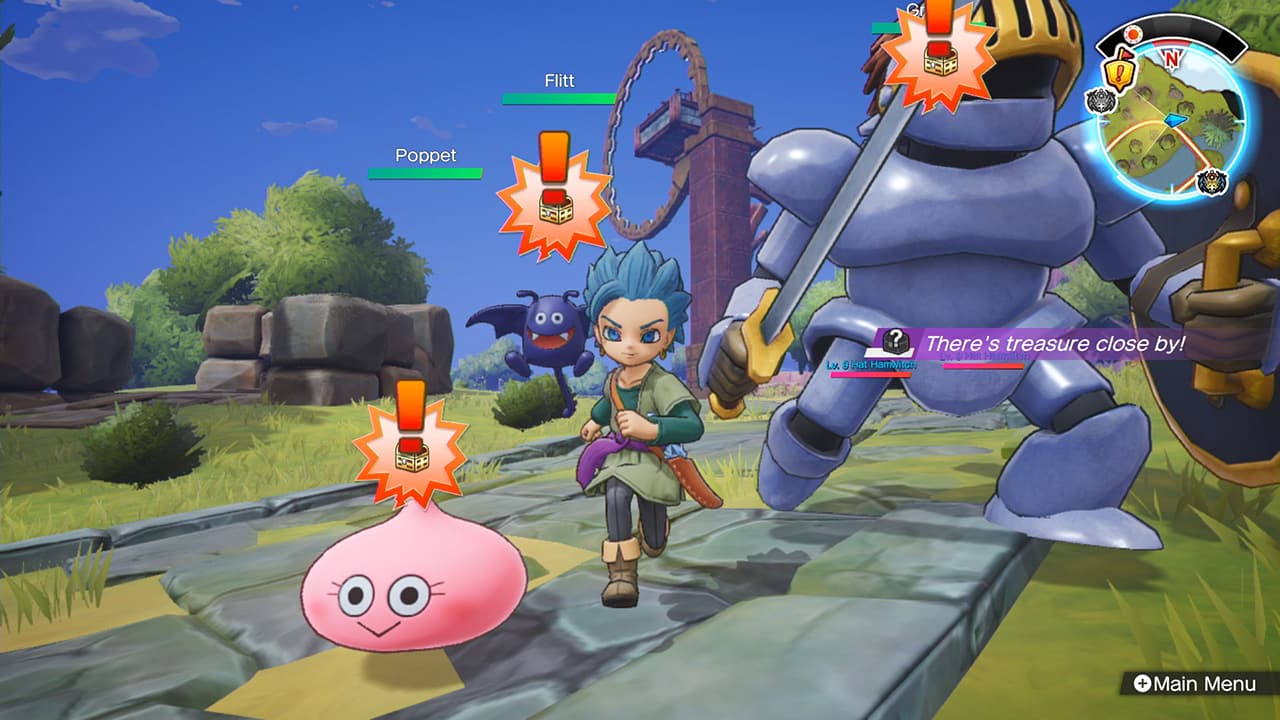 Really, the joy of Dragon Quest Treasures is in the amount of freedom you’re given. This is your adventure, and where you go, what treasure you seek out and what missions you complete and in what order is completely down to you. It’s a great feeling to be in control, to do as little or as much as you want in one sitting, and to see your treasure value grow each time you’ve been out and brought something new back. You’ll genuinely get excited when a treasure you’ve brought back is appraised to be super-valuable, and you’ll only be more eager to go back out there to find even more.

While its sheer amount of missions can be overwhelming at first, once you sink into Dragon Quest Treasures you’ll have a great time exploring the world of Draconia at your own pace. Its combat lets it down somewhat, but it’s easily forgiven when the lure to find bigger and better treasure is so strong. It might not be your usual Dragon Quest adventure, but it’s well worth your time.

This review of Dragon Quest Treasures has been facilitated via a code provided by the publisher. It’s available on Nintendo Switch. 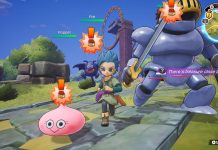 How to Save Your Game in Dragon Quest Treasures

How to Heal in Dragon Quest Treasures