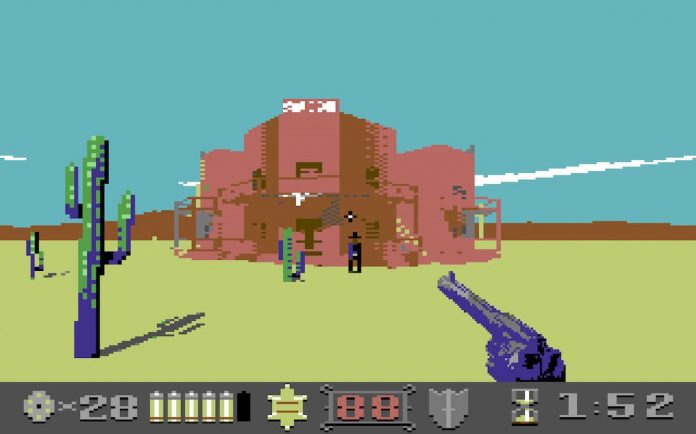 Bad Pixels is still very much in development, but this C64-esque PC Western FPS has definitely got our attention.

Bad Pixels sports the aesthetic of a Commodore 64 game, but it also reaps the benefits of modern technology. Sure, the C64 had the odd pseudo-FPS, but the closest it every really came was Battlezone. Bad Pixels, on the other hand, looks like it should have existed during the C64 era but couldn’t, due to the limitations of the hardware.

It also reminds us an awful lot of both Lucasarts’ Outlaws and the PC version of The Terminator. Yes, there was a Terminator game on the PC and, while it’s largely been forgotten, it was completely open world. Bad Pixels puts us in mind of the latter’s boxy buildings.

It’s early days for Bad Pixels but, so far, it’s looking pretty promising. As charming as its C64 look is, we’re really looking forward to roaming around as as badass sheriff, dishing out justice to murderers, thieves and other ne’er-do-wells.

That said, we also might end up being the bad guy, since Bad Pixels is set to be a multiplayer game. We hope there’s some kind of single-player content made available or, at least, that the game will support bots. But right now, we’d still be happy to roam this muddy-looking town, guns at the ready.

It’s the work of co-creators Hawkun and Matthew Ivic, the latter of whom is responsible for the game’s music. And yes, he has a Soundcloud.  You can keep up with Bad Pixels by following the game’s itch.io page and, if you want an in-depth look at its development, be sure to check out the developer logs.