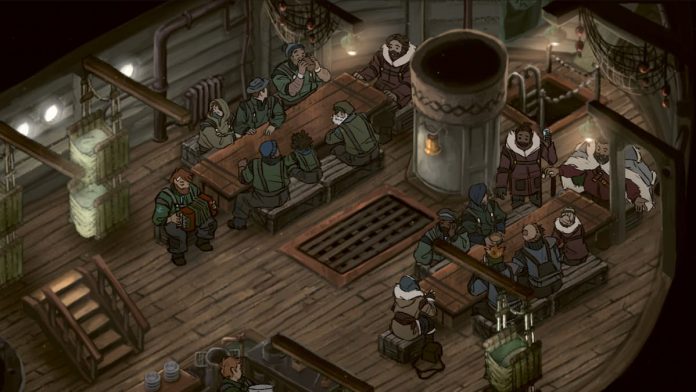 The Pale Beyond sees you leading a polar expedition to rescue a second, ice-bound vessel. Sound familiar?

It will, if you’ve watched AMC’s The Terror which, in turn, is based on the real-life tragedy of the HMS Terror and the HMS Erebus. Both ships became ice-bound and all 129 crew members were lost. The Pale Beyond, coming to the PC, is set to channel the spirit of the doomed Franklin expedition, though hopefully there’ll be some survivors.

“Players will be forced into Captaincy and manage the 24 crewmates (and 12 sled dogs!)”, read the game’s description. So, no pressure. It doesn’t state if, as was the case with HMS Terror and HMS Erebus, there’s a risk of people turning to cannibalism. But your crew can certainly mutiny, which could put a quick end to your sudden promotion.

The trailer is suitable striking, though we’re a little worried about that photographer. She seems to cheery – what’s the betting she’ll be the first to meet a tragic end? Developer Bellular Studios hasn’t stated whether the “main” characters can die or not, or whether it’s nameless NPCs that will suffer from your bad decisions.

We’re hoping it’s the latter as it’d add real weight to your choices. If you’ve played Frostpunk, you’ll know just how badly things can go wrong in the cold. Eating penguins (yes, you’ll be able to do that) is just the start.

The Pale Beyond arrives on PC this February 24th, via Steam and other online storefronts.