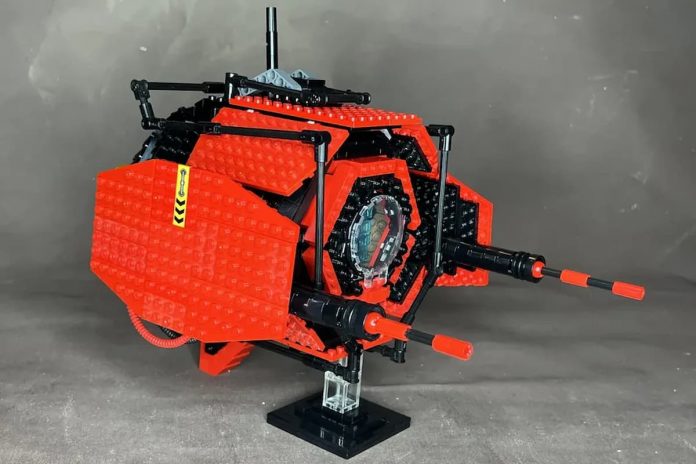 Want to get your hands on this LEGO No Man’s Sky Sentinel? The designer is hoping that, with enough support, it can become a reality.

No, they’re not turning up at LEGO HQ and yelling through the letterbox. Instead, they’ve submitted this awesome-looking LEGO No Man’s Sky Sentinel to the company’s LEGO Ideas programme and, if selected, it could become a real set.

If you’ve yet to play No Man’s Sky, which has come on leaps and bounds since its original release, you might be wondering what the heck a Sentinel is. Those are the robots that harass you as you plunder this open-galaxy space sim’s resources. Brickleintime has chosen to depict the regular, but still annoying, drone variety.

It’s an impressive piece of work, particularly since Brickleintime built it from scratch. That’s true of all LEGO Ideas submissions, in fact – we’re still in awe of the LEGO Death Egg Robot that didn’t make it into the official LEGO Sonic set. Maybe it’ll crop up in one of the sets supposedly arriving next year.

Brickleintime states it’s “..a very sturdy build and very modular and can be taken apart easily and without fear of breaking.” It’s around 9 inches tall and 14 inches long though they haven’t specified how many bricks are included.

So, how does this fantastic, floating menace become a real LEGO set? Ultimately, it’s down to LEGO themselves, but you increase the likelihood of it happening by offering your support. Literally, in fact – all you need is a free LEGO Ideas account, then visit the design here, and click on support.

If the design reaches 1000 supporters in the next year it moves onto the next stage, and then the next. Then, if it reaches 10,000 supporters, it’ll be reviewed by the official LEGO Ideas here. So if you want this LEGO Sentinel drone sitting on your shelf, head over to LEGO Ideas.