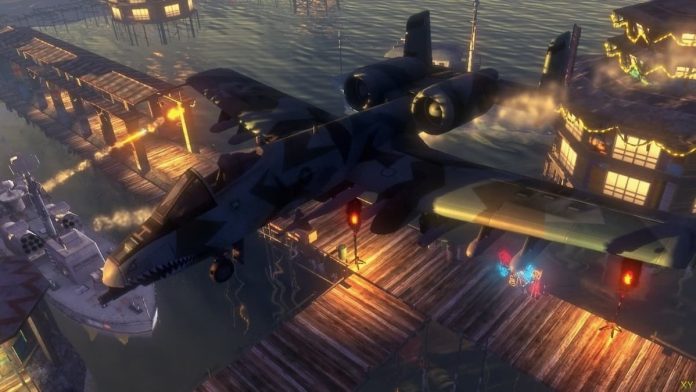 There’s a Mercenaries 2 glitch we never knew about and we just can’t stop watching it.

There never was a Mercenaries 3 and there’s no sign of anyone resurrecting the series. But we’re sorely tempted to dig our PlayStation 3 and Mercenaries 2 disc out just to experience this open-world action game’s absolutely bizarre glitch.

The bug, highlighted by Twitter user Purple Dragon, occurs when you call in an air strike on a particular building. The building in question is apparently constructed of 3 by 3 parts and when it collapses, things go haywire.

It folds inwards on itself then, while one central segment remains standing, the other pieces fall outwards in perfect harmony. The pieces then bounce up and fall back down again. No, that’s not a particularly clear description but the glitch needs to be seen to be believed. You can watch the clip below.

In Mercenaries 2 there are certain square buildings in the American base that are 3 by 3 segments of destructible parts. The game does not expect you to fly up and put an airstrike specifically on the middle and so it does this. https://t.co/kF70OZH0cj pic.twitter.com/zWSRagYMWw

As hypnotic as this clip is, it’s just one of many eye-opening game-related Tweets. Aaron and Tommy, hosts of Super Pod Saga, asked the question “What is the most useless piece of video game knowledge you know?“, and Twitter answered.

Another fantastic revelation, which was new to us, is that Fallout New Vegas’s endings aren’t video files. Instead, they’re projected on an in-world screen, with a NPC, “Ron the Narrator” hiding behind it.

You can check them all out by clicking on the original Tweet and looking at the quote tweets. The usual Twitter warnings apply, some of these answers could be non work-safe, but you could easily spend an afternoon poring over them.