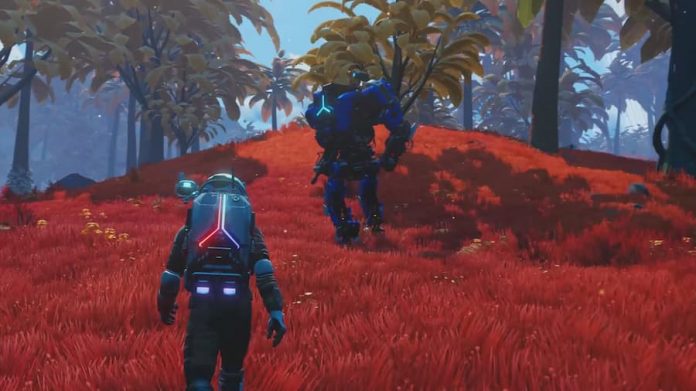 No Man’s Sky’s Sentinel Update is here, bringing with it some even scarier Sentinels.

That’s not the only change but it’s by far the most striking. The Sentinels are this space-sim’s galactic guardian and very angry if you start making a mess of the planet they’re patrolling. Sure, crafting is a huge part of No Man’s Sky, but having to keep an eye out for Sentinels can make it a tricky endeavour. Yes, you can fire back but this update gives the Sentinels more power to kick your bottom for plundering.

The update, which is free, will also delve into the lore surrounding the Sentinels, should you choose to follow that avenue of investigation. On top of that, you can now get your hands on a cloaking device, turn your own mech in to an AI companion and carry more multi-tools. Combat has also been tweaked to be faster paced which, presumably, means the big sentinels (dubbed Hardframe Battle Mechs) can turn you into a red smear even faster.

The update is out now and you can find the full list of changes here. The one update we’re still craving is big capital ships that, instead of sitting there, can lay into other ships with their beam weapons. Granted, that’s starting to turn No Man’s Sky into Homeworld but we’d happily pay for that addition.

The Sentinel Update is 2022’s first No Man’s Sky update but almost certainly won’t be the last. You can buy No Man’s Sky on PlayStation 4, PlayStation 5, Xbox One, Xbox Series X|S and PC, with a Nintendo Switch version releasing this summer.