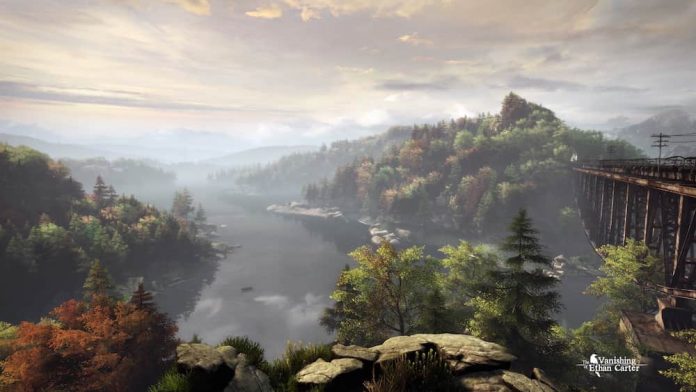 The first thing that strikes you about The Vanishing of Ethan Carter is just how pretty it looks.

Released last year on PC it was a graphical showcase, depicting an idyllic rural countryside that both entices you to explore yet also fills you with dread thanks to its foreboding atmosphere. In the time it’s taken to come to Playstation 4, its developer, The Astronauts, has seen fit to move the game over to the newer Unreal Engine 4, and judging by how great the game looks and runs, it was sure worth the wait.

Playing as Paul Prospero, a paranormal investigator, it is your job to seek out the titular Ethan Carter, a young fan that appears to be in the need of your assistance. Within minutes of arriving in the pictureseque Red Creek Valley, Pennsylvania, your fears are realised as you discover a train splattered with blood and a corpse shortly after. From then on, you are dead set on uncovering the mystery of Ethan’s disappearance as well as the strange surroundings you have found yourself in – and needless to say, it’s a captivating tale that will have you gripped from beginning to end.

The Vanishing of Ethan Carter is not a conventional game. With your focus strictly on investigation, there’s no combat or heads up display, and it doesn’t need them. Each area you explore has to be approached as if it is a crime scene, and in many cases they actually are. From finding your initial clue, you’ll have to put your thinking cap on in order to follow the trail that will lead you the the next piece of information as to Ethan’s whereabouts; a task that will test your perception, patience, and above all else, logical reasoning. Often following a trail of clues will ultimately lead you to orchestrating a visual re-enactment of events, requiring you to place up to five short scenes in chronological order to see exactly what happened. Even though The Vanishing of Ethan Carter is a very linear affair, it likes to mix things up very frequently, always keeping the experience fresh and enticing. Taking the average player only around four hours to complete, it’s quite an achievement that the environment you explore on your journey feels vast. When you’re not looking for clues out in the wilderness, you may be solving a puzzle-like conundrum in one of the few vacant properties in the valley, or even have a fair fright exploring the abandoned mines. Each area you visit is almost like a character with its own story to tell, and you’ll only ever be all too happy to listen.

In fact, my biggest gripe with The Vanishing of Ethan Carter is the fact that there’s not more to do in the world it provides for you. After you’ve found your clues or solved the puzzle within each of the areas, there’s nothing left for you to do but move on, and its a damn shame. It’s not so much a criticism of the game: its laudable that theres no filler here; the last things it needs is a collectathon to pad out the playtime, but sometimes the environments just feel wasted, such is their beauty. With a narrative that doesn’t hold your hand, it’s up to you to discover Ethan’s story as you make your way to his assistance. This lack of hand-holding makes it all the more disappointing to be confronted with a “you haven’t seen all the stories yet, go back and find them all to see the ending” once you reach the game’s climax. Whilst it’s nice that it gives you the opportunity to fast travel to previous locations to solve the investigations and puzzles that you have missed, it does break the feeling that this is an investigative experience where your sleuthing makes a difference to the outcome. With no option but to go back and solve tie up all lose ends, the mystery is resolved, and with it all hope of any replayability for the title.

In summary then, The Vanishing of Ethan Carter is quite an accomplishment, successfully eschewing traditional gameplay elements to focus on storytelling. It may be short, but you’ll be enthralled by every minute of it until you reach its clever and thought-provoking conclusion. It’s just a shame that the end forces you to tie up loose ends, as by doing so it severely limits your future enjoyment of the title. Still, with its near photorealistic visuals and great voice acting, it’s a unique game that I wholeheartedly urge any PlayStation 4 owner to experience once.