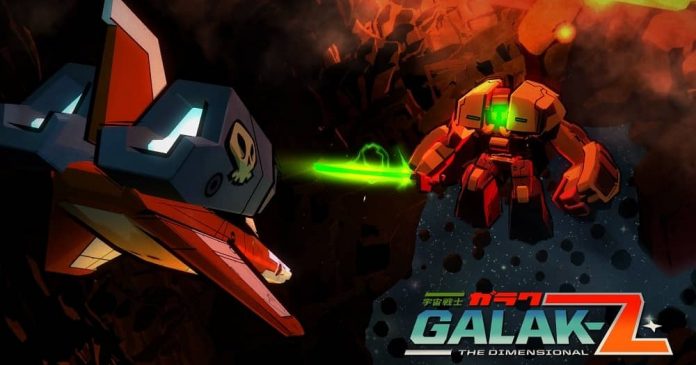 Galak-Z: The Dimensional is a 2D shooter combining frantic dogfighting action with strategy and guile.

Heavily inspired by Japanese anime sci-fi, it’s a slick, creative experience that rewards intelligent gamers who know when to fire their blasters and when to run.

Styled like a TV series, Galak-Z plays out over five seasons, each with five individual episodes. Currently, there are only four seasons available; the fifth is scheduled to be released at a later date. You take on the role of A-Tak, rookie pilot of the nimble ship “Galak-Z”. The story is suitably epic: as mankind’s last remaining hope, it’s up to you to defeat the evil imperial empire and save the world. This game makes no secret of being a love letter to classic anime; your ship even transforms (complete with that awesome transformer sound) into a giant sword-swinging mech. The vivid cell-shaded cartoon visuals are excellent, and combined with an original soundtrack featuring pulses of electro-synth and squealing electric guitar solos, developer 17-Bit has successfully captured the spirit of a successful anime series – to me, it feels like a cross between Gundam and R-Type.

Much of Galak-Z is procedurally generated so whilst the story is fixed, enemy types, item locations and mission objectives are all subject to change. Each season also features a random episode which often involves collecting some kind of item. Alongside hordes of imperials to fight, there are also organic alien life forms and rogue spacecraft belonging to teams of scavengers, though interestingly enough, these enemy groups are just as happy fighting between themselves as they are going after you. This adds another layer to the gameplay: if you’re being pursued by an imperial fleet, why not lead it into a swarm of alien bugs to attack it for you? 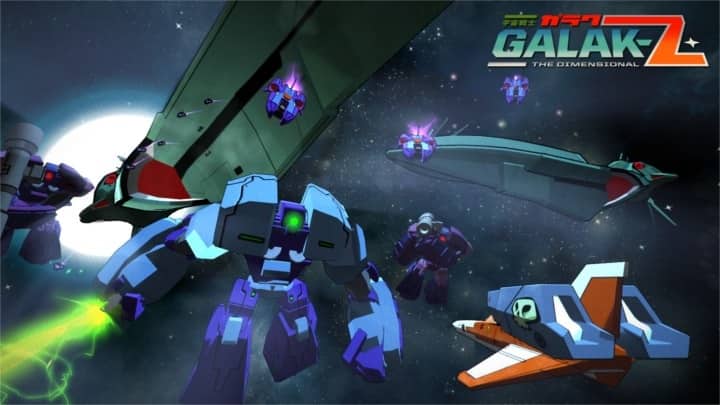 The need for intelligent decision making adds depth to Galak-Z and means that a thoughtless all-guns-blazing approach is rarely successful. You can even use the game’s environments to help you: in deep space you can choose to transform into the mech and use passing asteroids as projectile weapons, or take the defensive approach by hiding behind them and waiting for enemy patrols to move on. The ability to play as either the mech or the ship really adds to the experience as both have their own pros and cons, meaning you’ll need to evaluate enemy groups and environments before deciding which one to attack as.

Action isn’t limited to side scrolling so you’re free to roam around the levels in whatever direction you see fit. The controls are superb with both the ship and the mech feeling quick and nimble; you move through space like a dart and drift silently following any propulsion. Standing still is rarely an option, so you’ll need to make full use of the forward and reverse thrusters at hand, along with the time-limited boost feature. You can also strafe and jump over enemy blasts using the “duke” button. Caution is required when using your thrusters however, particularly when you’re keen to avoid a fight: nearby enemies can hear them, and once alerted to your presence, they’ll proceed to hunt you down. It’s worth mentioning that slowdown can be an issue, particularly where there are a large number of enemies on screen, but it’s not bad enough to ruin the fun. Whilst Galak-Z is not your typical 2D shooter – amongst other distinctions there is no combo scoring system – it does share plenty other classic features of the genre such as a range of weapon upgrades which significantly increase your firepower. The upgrades are satisfying and fun; you’ll unlock the ability for your powered-up blasts to bounce off walls, or set your enemies on fire for example. You can either find these upgrades hidden throughout the levels or buy them using scrap collected from enemy wreckages.

Another thing Galak-Z has in common with classic 2D shooters is the punishing difficulty level. This game is really tough; it will thrill you and beat you up in equal measure. To unlock each new season you must successfully complete all five episodes without dying – and there are no checkpoints along the way. I almost had a heart attack when the end boss in a fifth and final episode quickly destroyed my ship, sending me all the way back to the very start of that season, stripped of all my upgrades. That was an hour of my hard work erased in a second. This unforgiving save system takes no prisoners; sure, it makes the victory of completing a season that much more sweet, but the difficulty level will undoubtedly be just too frustrating for some players. That said, playing the game with the knowledge that each mistake is fatal does have some benefits. Evasion becomes a bigger part of the experience than it would be otherwise – and dogfights really cause your adrenaline to pump. With your shields down and only one bar of health remaining, Galak-Z really puts you on the edge of your seat as you frantically engage your thrusters to try and escape the next enemy attack. Ultimately though, my time is valuable and I don’t appreciate being sent back to square one an hour down the line.

All in all, Galak-Z is an exciting new take on an old genre. It modernises the classic 2D shooter experience and pays homage to some much loved Japanese anime sci-fi in the process. Whilst it might prove too difficult and frustrating for some, there’s no denying that for those with enough patience and determination, it’s loads of fun to play.