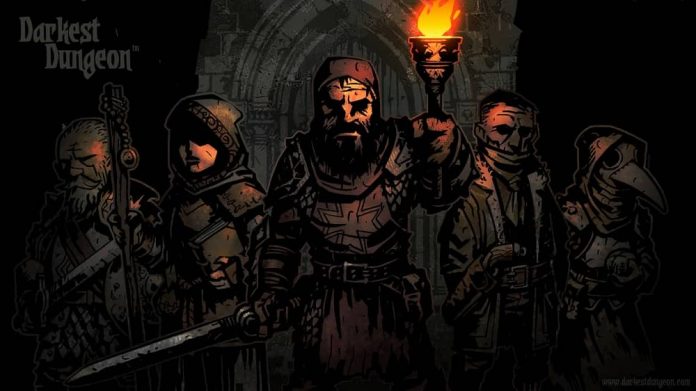 “And much of Madness, and more of Sin,
And Horror the soul of the plot”

Edgar Allan Poe’s famously ominous quote from his poem Ligeia might be the best description possible for the new roguelike out on the block.

Darkest Dungeon is a game that on the one hand, uses many of the familiar tropes the gaming community has expressed a love for (a Lovecraftian pantheon of gods and monsters to name one), and on the other, takes advantage of that strange phenomenon Steve Jobs observed: “people don’t know what they want until you show it to them.”

What is abundantly clear is that Darkest Dungeon has shown the people what they wanted all along. On the surface, it is ludicrously simple. You must construct a team of four adventurers who will brave the depths and terrors of your father’s old estate: its ruins, wealds , caves sewers and unknown deeps. Each adventurer can choose four abilities to use in combat. Limitation is the name of the game here – how creative and effective can you be with such restricted resources?

But the thing about this game is there’s always that horrible element of chance that will undermine the best laid plans. Your adventurers are created with random personality traits. These could be anything from a strong sword arm (“Slugger”) to a fear of beasts (“Zoophobia”). It’s possible to have an arbalist (crossbowman) with a dodgy eye which means their aim is poor or a bandit with an annoying cough which alerts monsters.

The variety is immense. And when a good adventurer comes along to the humble Hamlet outside of the dark estate, you will seize upon them and do everything in your power to keep them alive, including sacrificing your other adventurers. 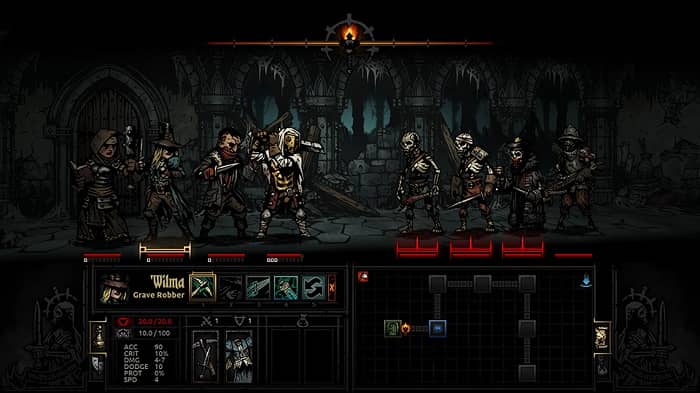 Quests are randomly generated. The maps of each area and their contents are randomly generated each time you enter them. What seems a simple quest may be made difficult by an impossibly hard series of encounters, and a challenging quest might be made simple by a lack of traps or a straightforward map design. You simply do not know. And not knowing puts you right in the shoes of the adventurers, one of the key focuses of the game and one of the areas in which it is most successful.

While your adventurers journey through the deeps, they not only lose health and risk death, but their stress levels increase as their sanity is tried by what they are seeing. If their stress reaches 100, they are tested. Sometimes the adventurers will come out of the test stronger than they were before, gaining a trait such as “virtuous” or “focused”. The best is brought out of them.

Far more commonly, your adventurers will crumble, becoming “selfish” (refusing to heal other party members, for example) or “masochistic” (harming themselves as they fight). You can bring them back from these states of madness by lowering their stress. This can be achieved by sending them to The Tavern (through whoring, drinking or gambling) or The Abbey (through prayer, meditation or flagellation). But even then, no method is tried and tested. You might put a harrowed healer in a bar to drink away their sorrows only to see them get drunk and lose all your money and be found naked in the street the following day. You might send another troubled adventurer to pray at the abbey, where they promptly have a vision of a terrible, cosmic god which scars them for life. 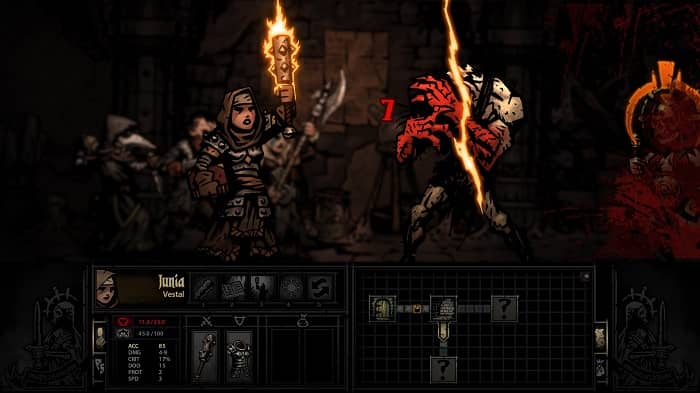 It’s these miniature stories, created effortlessly through both the random generation in the game and your tactical choices which make Darkest Dungeon so special. You are creating your own legend, your own heroes. And, like in an episode of Game of Thrones, your favourite characters might die at any moment, generating real suspense and involvement.

Each expedition forwards the completion rate of the zone towards a boss fight, whilst also allowing you to accumulate treasure (for purchasing supplies, items or training for your adventurers) and artefacts such as busts, paintings and deeds (which allow you to upgrade the services your adventurers can use between adventures). These services can either be used to upgrade equipment or skills (The Blacksmith, The Guild) or the effectiveness of your de-stressing at the Tavern or Abbey.

Where does the “Horror” come in?

I’ve seen an entire party, well balanced and well equipped, destroyed in a single blow from a boss. I’ve also seen a party with no equipment or supplies take on a three day dungeon and survive (dungeons vary in length from short (no campfire rest), to medium (one rest) to long (two rests) – resting allows you to eat food and use stress-healing abilities, but there’s also the chance of an ambush). The randomness is the fun of the game, but it will frustrate players looking to quickly progress, or who want to hold on to their favourite characters and endlessly upgrade them.

And if you were thinking of re-loading your save, this game employs a continuous auto-save function which prohibits that. No cheating allowed.

Yeah folks: this game hates you even more than Dark Souls. 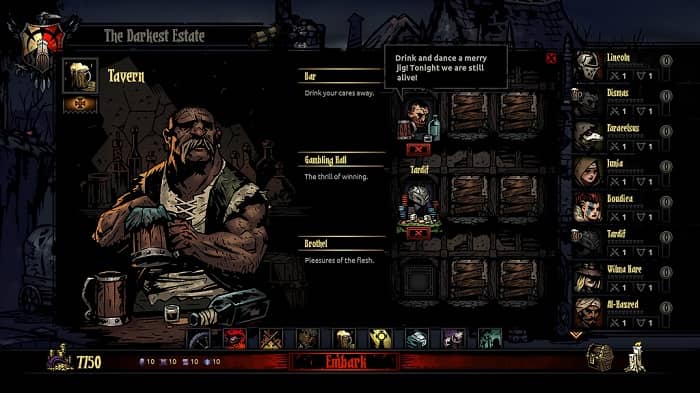 It is not a perfect game. No game is. The asking price of £14.99 is perhaps a little steep considering the game is technically unfinished. Two of the zones “The Coves” and “The Darkest Dungeon” (the final area) have yet to be added. The dialogue in the game, although exceptionally well-written for the most part, can become repetitive. It could be easily fixed with a few updates adding some lines, but again, for the asking price, it feels a little limited.

Furthermore, hardly any of the game is animated (it gives the illusion but actually most of it is transitions from one still to another). Having said that, the art-style is very original, reminding one of a mix of medieval England at the height of the Black Death and Lordran from Dark Souls. For those who love beautifully modelled 3D you’re out of luck. I, as it happens, am a big fan of the gritty, 2D art-style, but this is personal preference.

The other issue is that the game is very much a single focus. There are no alternative modes or challenges. Though at first you get lost in the world (it’s the kind of game you can’t help but play for four hours for the first play) you soon hunger for something a little different – perhaps a horde-style mode, or a separate challenge that allows you to build a team (including selecting negative and positive traits) and pit it against ludicrously powerful dungeons to see who can create the most successful force.

Provided the extra levels don’t fall short, and provided they add some content, Darkest Dungeon could easily be a must-play title. More importantly than any of the mechanics described above, it creates mood. Clive Barker identified this as one of the most important elements of any piece of art – even above its technical execution. The world feels unique, even though its sources can be identified.

In it’s current state it has flaws, but in spite of that, personally I’m in love with it and it managed to touch a chord with me. I think it was the moment I first heard the sonorous voice of your dead ancestor declare “This man understands that existence and adversity are one and the same”. Because that, more than anything, is what this game teaches you.

Darkest Dungeon is currently in Early Access on PC, and is coming soon for PlayStation 4 and PlayStation Vita. We reviewed the PC version.