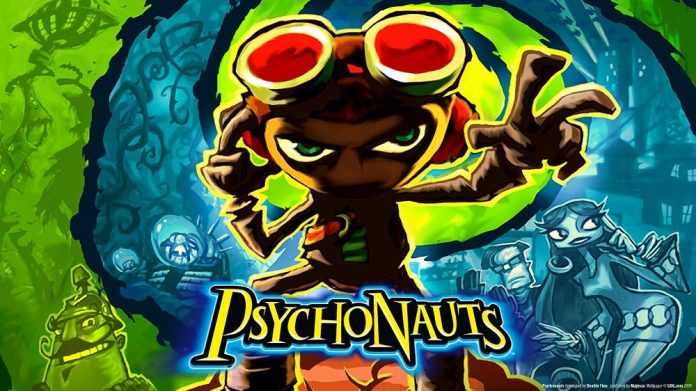 The classic PS2 platformer Psychonauts is making a triumphant return to PS4 this spring.

Wait there’s more; Psychonauts 2 has also been confirmed! You can count on me to deliver you some must have information on the much-anticipated sequel. And so, I’ve delved into the wonderfully insightful and sketchy realm of Reddit to glean the important details given to fans by Tim Schafer – the creator of Psychonauts.

In a Playstation Blog post James Spafford (Community Manager at Double Fine) lets us know that Psychonauts 2 would be in development.

We’re happy to report that we are now 100% funded, so can officially announce that Psychonauts 2 will also be coming to PS4 in a few years time — that’s a whole lot of Psychonauts to look forward to!”

Great, now lets get to the real meat of this article, some answers given to fans from Tim Schafer’s (Creator of Psychonauts) AMA (Ask Me Anything) regarding Psychonauts 2.

Schafer says that he’s been keeping a “document of ideas” with “new mental worlds and story ideas” as he thinks of them. He then goes about giving us a generous glimpse of the plot,

“In Psychonauts 2, Raz will finally get to go to Psychonauts headquarters–his lifelong dream. There he can see Sasha and Milla in their natural environment–international espionage. But he finds several things strange about the organization. While Truman Zanotto was missing, several changes to the direction of the organization were made by his second in command. Funding was cut from traditional psychic research and peacekeeping, and redirected to unorthodox, fringe endeavors, including the discredited practice of necromancy. Raz soon uncovers sinister things at work in the shadows of Psychonauts headquarters, including double agents and evils of the past. Raz’s own family history plays a pivotal part in the story, and Raz must confront the roots of the curse placed on his family once and for all. And also deal with this whole “girlfriend” term and what it really means. :)”

Why the Unreal Engine?

The original Psychonauts was developed using the Buddha engine and one user asked why Psychonauts 2 was being moved over to Unreal, was this due to the Buddha engine’s aging technology? Schafer responded by saying that this wasn’t the case at all and that he just wanted to “focus on the design side of the game”.

Schafer said that there would be a “mix of old and new powers”, which makes me wonder if we’ll see his old powers upgraded in new and exciting ways, putting a unique spin on his original abilities for the sequel.

Erik Wolpaw was also credited as co-writing Psychonauts and Schafer answers a question asking if he’s going to be making a return for Psychonauts 2. He stated that “he will help with the writing like he did on the first game” and said that he’d be coming into the project earlier in its production so he can have an even bigger impact too.

The importance of sandwiches

Schafer was also asked a very pertinent and important question regarding sandwiches, whether he sliced them across or diagonally. He answers “Diagonally!” emphatically before giving us a tale about a time in his past where he was called a girl for cutting his boss’ sandwich diagonally. I’m sure there’s a cryptic message about the sequel in here somewhere… perhaps I’ll speculate on this answer for a couple of years.

Here’s another link to the AMA where you can grab even more details regarding Psychonauts and Psychonauts 2.

Psychonauts is currently available for PS2 and will be released for PS4 this spring. Psychonauts 2, that’ll be a while.