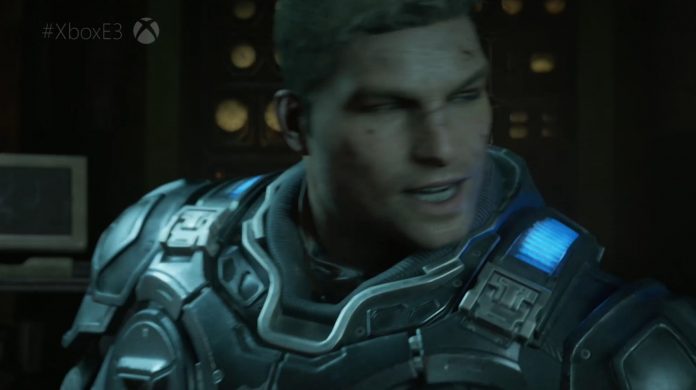 Rod Fergusson of The Coalition came on stage to tell us about Gears of War 4. But before we were hit with some punchy gameplay, we were left reeling from Xbox Play Anywhere. I’m still trying to calm down…

With Xbox Play Anywhere, games such as Gears of War 4 will be released simultaneously for Xbox One and Microsoft Windows 10. Not only that, but you’ll be able to play multiplayer and campaign modes with your mates through the wonders of cross-platform.

Gears of War 4 looked stunning, and whilst it’s not a huge departure from previous entries, it’s got the classic gameplay many fans have been yearning for. There’s some brilliantly gruesome executions on show, a lightning storm that rages and culminates in a terrifying crescendo of zappery, saw blades flying into hordes of enemies and a titanic berserker that gets angrily curb stomped. I’ll not mention the final sequences as they’re best left for you to savour. And if you’re a long term fan of the franchise, it doesn’t disappoint in the slightest and you’ll thank me for holding off on the narration.

There’s also a sublime and rather menacing looking Xbox One Gears of War themed controller. I’ll be having that, cheers.

Gears of War 4 is coming to Xbox One and Windows on 11 October.