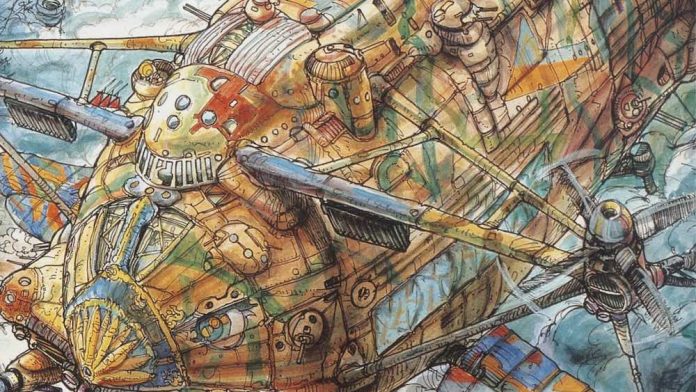 Any of you out there who owned a Sega Mega Drive back in the day might just remember a game called Empire of Steel, also known as Steel Empire in North America and Japan.

An incredibly cool looking horizontal shoot ‘em up, the game stood out from the competition because of its steam punk theme. It received rave reviews from the press of the time and remains one of the best shooters in the Sega’s machine’s vast library. Well, the original creators Hot B, along with developers Mebius and publishers Teyon, have now brought this game to the Nintendo 3DS – in a new improved form.

One of the most unique features of Steel Empire is that you get a choice between two very distinctly different ships; the first is a biplane, which is small and fast but lacks durability, while the second is a huge zeppelin that’s slower but much harder to destroy. Each craft has their own benefits and is suited to different parts of the game, so thankfully you are given the choice to choose between them after each set of levels.

The level structure of Steel Empire is a standout feature of the game. You are given two or three stages to complete at a time, each with their own boss before you move onto the next level with a new set of stages. After a level is complete, you get to change your craft if you wish, watch a replay, continue the game in your current craft, or save your progress and come back to it another day – obviously a big advantage over the Mega Drive original!

Like any other horizontally scrolling shoot ‘em up worth its salt, Steel Empire has a well-developed power-up system. As well as improving the spread and power of your bullets, you can also add on little decoys who stick to each side of your ship and provide additional firepower. A particularly useful element of these is that they cannot be destroyed on their own – you only lose them if you die. I should also add that your machine gun is not your only weapon, you can also drop bombs from the bottom of your craft to destroy ground objects, and these can also be upgraded too. No shoot ‘em up would be complete without a super weapon either, and Steel Empire allows you to drop a limited amount of nukes on your enemies for maximum destruction! Other icons that can be collected along the way include hearts, to replenish your energy bar, extra nukes and dollar signs, that award you additional bonus points. 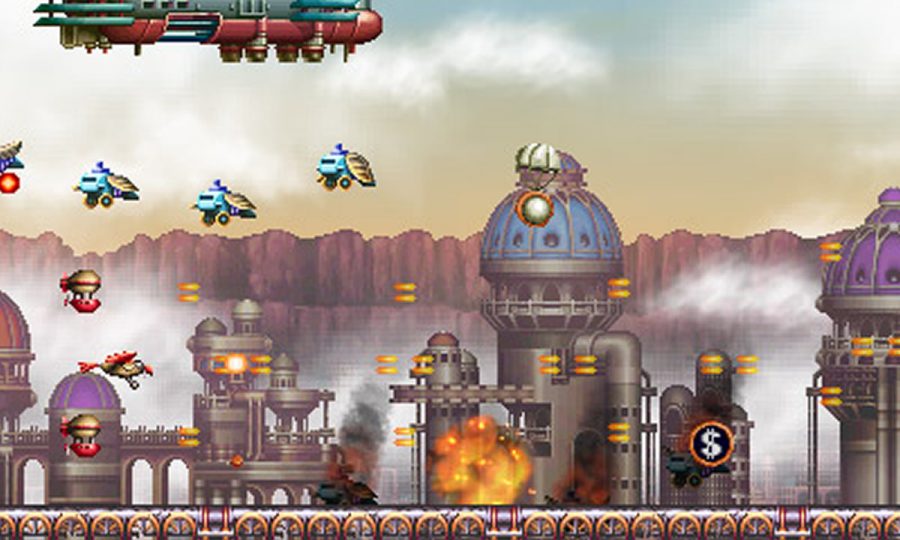 And speaking of your score, you can also earn extra lives by reaching certain milestone numbers. When you lose a life you continue straight where you left off, although minus all your power-ups, which sure beats starting the level over, something I personally cannot stand in any game. If you do happen to use up all your lives you are granted just one continue, so make the most of it!

What I love most about this 3DS version of Steel Empire is that the developers have copied the original Mega Drive version over in its original form and then added a host of subtle but all-important extras. None of these are more notable than the simply gorgeous visuals. The already attractive pixels have been upgraded with greater colour depth and some excellent 3D effects. This is mostly apparent in the scrolling where the different layers of parallax are far more noticeable and add considerable depth – it’s especially useful for distinguishing between foreground (can hit) and background (can’t hit) objects, which were sometimes hard to work out in the original game. The 3DS version also feature a new version of the already terrific soundtrack too; they have thankfully kept it in the chiptune style and it will really have you bopping along.

My only minor complaint with Steel Empire is that it’s perhaps a bit too easy for the seasoned gamer like myself (I completed it on my first go!) but there are several difficulty levels, configurable options and a number of achievements and extras that can be unlocked by completing the game in each setting and reaching certain goals.

For all the 3DS owners out there who, like me, are sick of seeing the deluge of kiddie-focused games appearing in the Nintendo eShop, Steel Empire is a very welcome respite. Outside of the Sega 3D Classics, range this is the best thing to appear on the 3DS in recent memory and is a must-have purchase for any 3DS owner.

Steel Empire is available on 3DS.