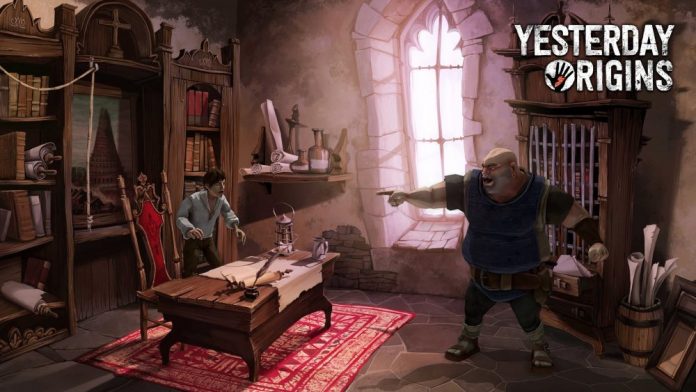 We managed to get our hands on an exclusive preview copy of Yesterday Origins, the new point and click game coming next month to PS4, Xbox One and Steam.

The preview consisted of two levels totaling a couple of hours of gameplay – although canny players may get through it quicker. While many aspects of this preview demonstrated some exciting new innovations in the point and click genre, as a whole, I was left with a few concerns, principally, on the narrative content.

Our story opens 500 years years ago during the era of the Spanish Inquisition, where the son of a nobleman is imprisoned, supposedly for his Satanic powers – speaking every known language, ambidexterity, and so on. His only cellmates: a bloodthirsty pig who “murdered” a monk and is about to stand trial from the Inquisition, along with the dead body of his childhood friend. His only resources: damp cloths, torture implements and ingenuity. It certainly proves a challenging opening sequence, with a fiendishly complex escape method. It is nice, too, that modern game engine capabilities allow the storytelling of the point-and-click elements to be augmented. For example, when you dip a metal pole into the fire, you are rewarded with a proper animation. When you are initially shackled, your character actually walks around with the shackle around their ankle, limiting their range of movement around the room. These fine touches really deepen the immersion. Furthermore, instead of the primitive “I can’t use that” statements typical of the genre when you incorrectly try to use or combine an item, you will often a get a humorous little text box, comic-book style, to tell you why the idea is probably not going to work or isn’t possible.

While on principle I like the amount of work that has gone into making this a more thoughtful experience, rather than desperate trial and error, I did find the text frustrating after a while. Yesterday Origins is very prescriptive with how it wants you to get through certain scenarios. There is even an additional set of “knowledge” tokens you acquire when you learn new information and often you have to combine these with your items to prove that you are following the logical steps of the scene and doing things for the right reason. For someone who is a bit wacky and creative like me, I find it difficult to get into the headspace of the game designer and figure out exactly how they want me to do something. I want to do my own thing instead.

At one point in the cell scene I had all the pieces in place to progress but it wanted me to put them together in an exact order, and rather than finding it rewarding to discover the final combination, I just felt frustrated at how linear the experience was. One of the things I love about video games is the freedom to inhabit another body and play how you wish. The Yesterday Origins demo very much felt on the rails, and while there may be more choice in later parts of the game, I couldn’t help but think it was indicative of the whole thing. We only need to compare this to a masterpiece of the genre: Harlan Ellison’s legendary I Have No Mouth and I Must Scream, based off of the short story of the same name, to see Yesterday Origins’ limitation. I Have No Mouth and I Must Scream was released in 1995, and yet there were often a huge variety of ways to resolve a situation, an array of moral choices to make which affected both short term and long term outcomes, and on top of that, a razor sharp script that probed the dark recesses of the human psyche. 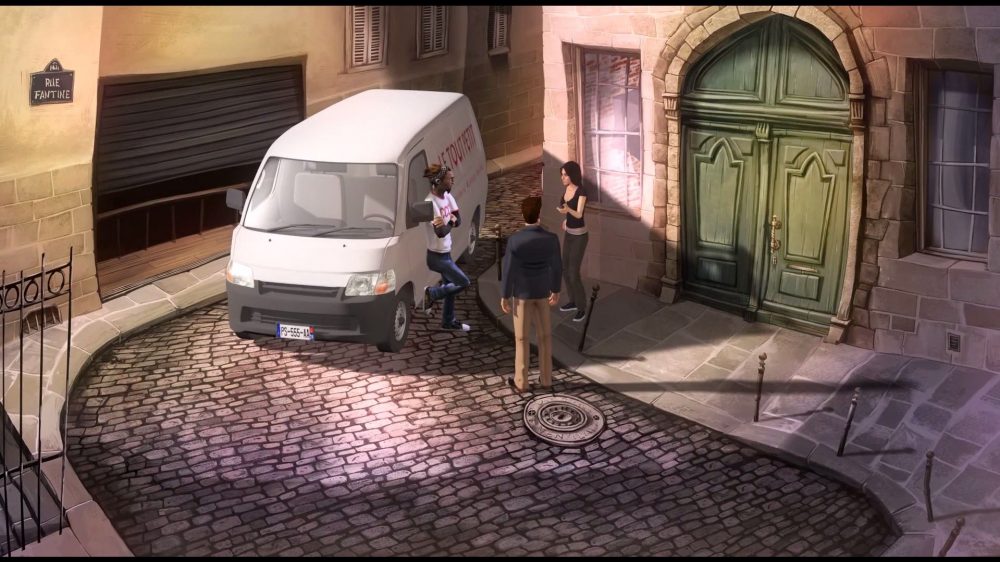 And let’s talk about the script of Yesterday Origins. The historical detail is remarkable and certainly to be lauded, with details of Spanish history, Inquisitional practices, real Latin excerpts, Norse mythology and more all jammed into the first hour; less remarkable is the interplay between characters. I must admit a personal bias here in that I found the main character extraordinarily dislikeable from word go. I’m all for unconventional heroes, but the rather effete and privileged Don Miguel, rich-boy through and through, unfortunately does not capture my interest. The indignant questions he asks become irritating quickly, especially when you often need to repeat dialogue to ensure you have gleaned all the useful nuggets of information from it. I accept it was a deliberate choice and the character may go on a striking developmental arc throughout the story, but what I played did not make me warm to the character, and when your game is heavily story driven, that is a major issue.

After escaping the cell, we fast forward to the present day, where the same Don Miguel is now John Yesterday, an immortal man who cannot die but loses parts of his memory every time he is resurrected. His partner, Pauline, has the same power, but does not lose her memory. Now, unfortunately, we reach another contentious part of the demo for me. You can swap between characters and while playing as Pauline, she notices she has some unwanted wrinkles developing under her eyes; she isn’t immune to aging, after all. We learn also that when she dies, she resets to the same age she was the first time she died. Pauline decides the fastest way to get rid of her wrinkles is to kill herself in the shower with John in the next room. You find her concealed gun, parts of it hidden inside her beauty products, assemble it, load a bullet, and step into the shower to shoot yourself.

I have a pretty dark sense of humour. In fact, I’d describe it as jet black. But for me, this scene felt quite tastelessly provocative, and it infuriated me again that I had no choice in the matter. Yesterday Origins forced me to deal with Pauline’s petty vanity in order to progress. And while I do not think it is possible to shield people from every possible distress, having the player go through the act of preparing for suicide in such a detailed and specific way is a pretty big trigger for those who have ever been vulnerable to suicidal thoughts. All that would be required to change this is a choice: keep the wrinkles or kill yourself and remove them. That would make the game interesting. Anyone who wants to go through with it can, anyone who doesn’t can live with the ageing process. There could be ramifications for this down the line, even small ones, like a hurtful comment from John about how she does not look her best. Little things maketh a game. Sadly, it seems this will not be the case. You have no choice in the matter. 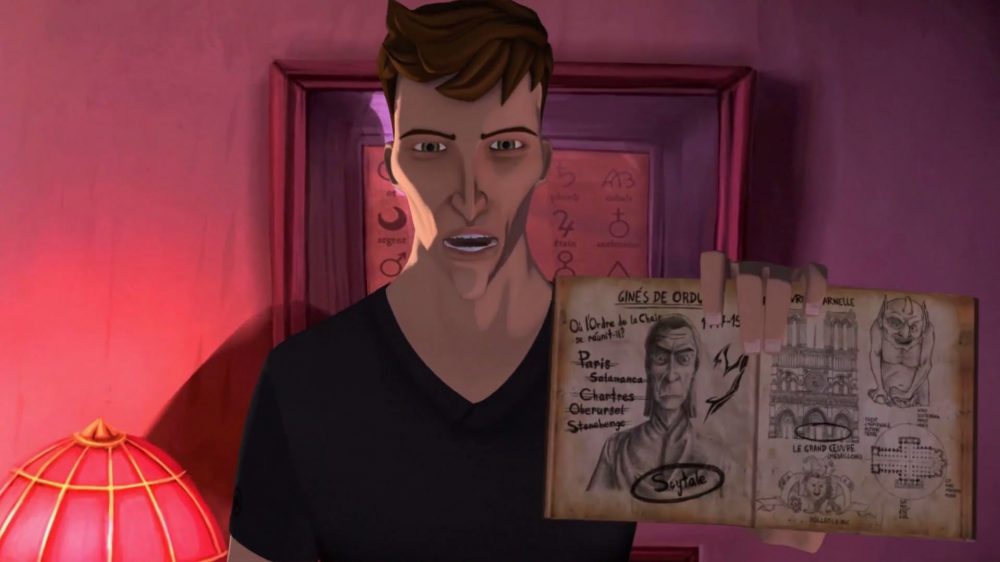 If I were to be really pernickety, I’d say having immortal characters ruins any tension in your game from word go, especially after you’ve just brazenly demonstrated their immortality and its lack of consequences. What, then, is my interest in these characters? What could possibly threaten or endanger them? Perhaps that is not the point. Perhaps, it is more about uncovering John’s past, hidden from him because of amnesia? This falls apart when you consider we just played the opening sequence where he is in the cell. The player knows already where he comes from. And sure, there are minor questions unanswered: what happened after Don Miguel escapes and goes on the run, but really does this hold enough intrigue to command our continued playing? Similarly, devices which seem clever on the surface prove to be rather hollow. John has a video he sends to his phone every day which he made to jog his memory, Memento style. Only, he is with Pauline, who remembers everything, and has no reason to withhold information from him. John still remembers having the scar on his arm from his prison escape removed. And he still dreams about the pig. So what exactly can’t he remember?

I liked many elements of Yesterday Origins, but unfortunately, the demo has not left me with the experience of wanting to play on. In the full game I would like to see more flexibility, choice and development of the characters. Having said that, for enthusiasts of the genre who enjoy world-hopping romps glutted with cultural references and historical intertextuality, I’m sure this will be just the game. Those who like to have their minds challenged with intriguing puzzles will also probably be fans. But for those who want a story which sucks you in and makes you care about the people in it, stick with Ellison’s dark classic. Gold doesn’t lose its shine, even when it’s pixelated.

Yesterday Origins is coming to PS4, Xbox One and PC on 10 November.