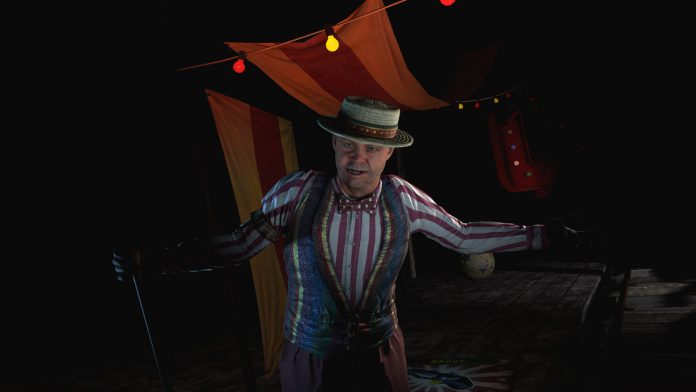 Move over House of the Dead, there’s a new light gun king in town.

A literal on-rails shooter, Until Dawn: Rush of Blood is an exhilarating ride through a haunted house and its surrounding locations. More thrilling than it is horrifying, Rush of Blood is pure adrenaline from start to finish – though fear not, horror fans; there are a few jump scares thrown in to get you along the way.

Rush of Blood is split over six levels, each getting a little more difficult – and a damn sight more freaky as you progress. Starting fairly innocently in a run-down amusement park, you begin shooting sideshow ducks and moving targets before entering a fairly tame looking haunted house. Don’t be lured into a false sense of security though, as shit soon gets real and you’ll need your big girl (or boy) pants on from level two onwards.

The funfair theme continues throughout as there are targets dotted throughout the levels, but once you’re past the prologue it’s the creeps and monsters of the night that you’ll want to be aiming down your sights at. Masked psychopaths, giant spiders, mutated wolves – it’s all here, and it’s all out to try and scare you. As long as you keep your wits about you, there aren’t too many jump scares, but it’s easy to get caught off guard. Along with having to shoot the nasties, there’s also a smattering of environmental dangers too, including blood-stained circular saws you’ll need to dodge left and right for and dangerously low beams that you need to duck under. 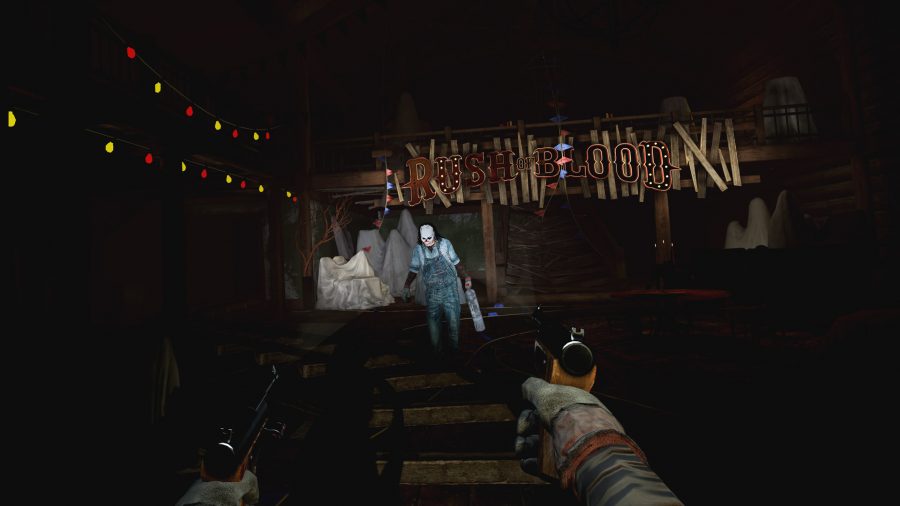 The aim of the game – other than to survive (and you can die; I found out the hard way) – is to rack up the highest score you can. Accurate shooting, hitting as many targets as you can and pulling off combos will all assist in heading up the leaderboards. Once you’ve played through the game you can jump to any level you want, so if scorechasing is your thing there’s plenty of replayability. There’s also a choice of three difficulty levels. Even on Easy, Rush of Blood has some frustrating moments. Mostly it’s a breeze (well, as breezy as battling against a whole host of cretins out to murder you can ever be), but there were a few sections that had me ready to pull out my hair after repeatedly dying. Still, being a good shot helps, as does having a keen eye for what’s happening around you.

It’s got to be said that an immersive “light gun” experience is perhaps the perfect use of VR, and Rush of Blood is a brilliant showcase of how well the technology works. Sure, it’s not perfect, but considering we’re still in the early days of 21st century VR, it’s got me excited for what else is to come. You can play with either two Move controllers or your regular Dualshock 4, but the experience is much smoother and more enjoyable if you do have Move at your disposal. Using Move allows you to use two guns independently of each other whereas using the DS4 will give you two guns individually controlled by each set of triggers, but they’re in a fixed position. In other words, if you’ve got enemies coming at you from either side, you’re at a massive disadvantage with a standard controller.

For the first few levels, the tracking of the controllers worked flawlessly. There was one particular section however that seemed to decide that the ability to aim was overrated, and my in-game arms started bending and flailing around wildly. It ruined the immersion somewhat, but thankfully it seemed to reconfigure itself before too long. When the tracking works as it should, it’s absolutely brilliant; your on-screen guns feel like they are actually in your hands and every movement you make is carefully replicated. It’s just a shame that it is prone to going a bit haywire from time to time.

My only real issue with Until Dawn: Rush of Blood is that the Until Dawn tie feels rather arbitrary. Sure, a few environments look familiar – at least in the beginning – and you’ll recognise a few of the enemies if you played Supermassive Games’ horror gem last year, but it’s so far removed from anything that Until Dawn was that it feels like a bit of a sellout. The concept of Rush of Blood would have been strong enough to stand on its own without an already successful name tacked to it.

As a launch title for PSVR, Until Dawn: Rush of Blood does everything right – almost. It’s a shame that the tracking of the controllers goes a little awry in places, but beyond that, it’s a brilliant showcase of how well VR and motion control can work. It’s completely immersive; the addition of the rollercoaster makes for some exciting stomach flips as you speed down drops and whizz around corners; and most importantly, it’ll have you on the edge of your seat from start to finish. Horror fans may hope for a little more terror, but for me, the balance between thrill and fear was spot on.

Until Dawn: Rush of Blood is available on PS4 exclusive to PSVR. 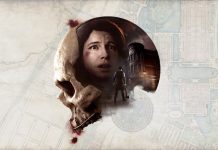