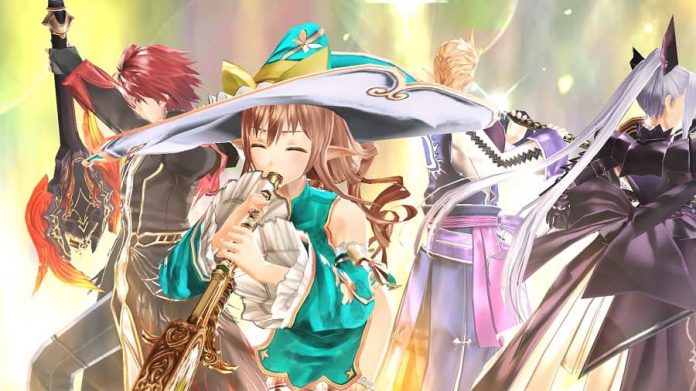 Shining Force was my Fire Emblem, Shining the Holy Ark was my Diablo, and the elusive second and third scenarios of Shining Force III were my Half Life 3. Yet, as many games do in the eyes of growing youth, my interest waned. After the release of Shining Soul, which was the first game in the series not developed by Camelot, the Shining games began to shift in focus, slowly moving away from where I had once enjoyed.

It’s from this perspective that I arrived at the announcement of Shining Resonance Refrain, a game originally released on the PlayStation 3 exclusively in Japan, never making its way to the west – until now. I was cautiously optimistic to see a game developed by Media.Vision, who are not only responsible for the much loved classic Wild Arms, but are also behind one of my recent favourites, Summon Night 6. While it may not compare to the games I once adored, Shining Resonance Refrain has somehow courted me back into a franchise I had long since stepped away from.

A world of music and mayhem

Shining Resonance Refrain opens with two of its main characters, Sonia and Kirika, breaking out the nervous and unassuming Yuma from an imperial prison. In the midst of war, the lines of battle are drawn between the Astorian Kingdom, a peaceful monarchy in the middle of the Alfheim, and the invading Lombardian Empire. Yet while this war is the driving factor for much of Shining Resonance’s plot, at the centre of it all is the internal struggle of Yuma, who holds the spirit of the Shining Dragon within him. Unable to fully control the power of the Shining Dragon, Yuma must learn to balance the urge to protect those he loves from both from the Lombardian Empire and the power of the Shining Dragon within him. It’s with the help of the main characters of Shining Resonance that Yuma is able to find that balance as they all must learn to deal with what it means to support your friends. 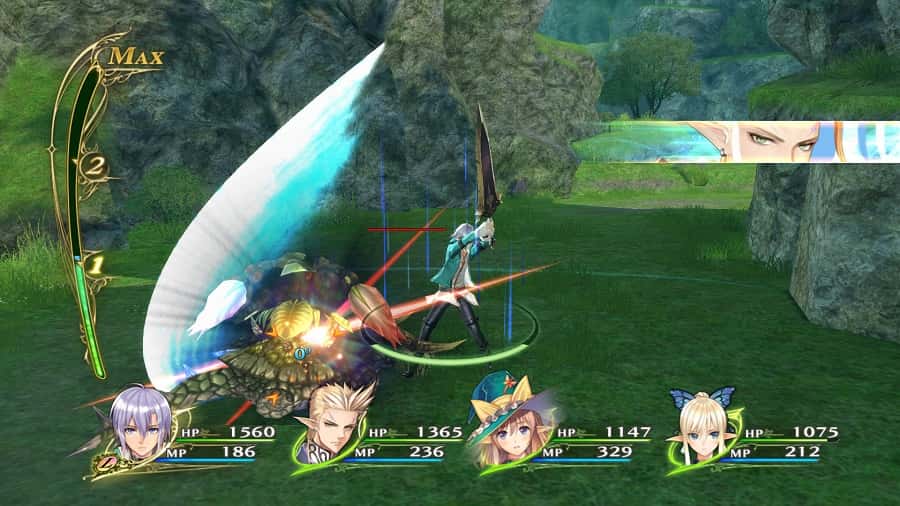 Unabashedly, Shining Resonance Refrain is a wholesome adventure about a group of friends in the middle of a war, dealing with the souls of ancient dragons and evil gods, one that I found myself engaged in from beginning to end.

That’s not to say I fell in love with these characters from the outset, however. The charming, oftentimes cheesy nature to Shining Resonance Refrain’s writing was admittedly hard to stomach at first. Characters in the Astorian Kingdom almost always seemed a little too friendly, stepping over each other as they all tried to apologise for the simplest of miscommunications. Yet, as the game continued, the interpersonal relationships of the game’s main cast began to complicate themselves. Agnum, whose hot-headed temper often has him diving headfirst into danger, tries to ease Yuma’s fear of losing control of the Shining Dragon – but when the time comes, he finds himself useless. There was a moment of sincerity once Agnum and Yuma had gotten past their over-friendly camaraderie and dealt with the repercussions that felt more real than any of their encounters before, and helped bolster every interaction between them afterwards. Nearly every character had a similar moment, if not many, thanks to the game’s night talks system and bond diagrams.

While Shining Resonance Refrain’s cast took some time to get adjusted to, I found myself in love with the game’s combat almost immediately. Most similar to recent Tales games, Shining Resonance’s combat transitions seamlessly between exploration and combat as the environment around you becomes the arena in real time, letting you run around in 3D space freely. Each action you take, besides moving, requires Action Points, which are represented by a gauge that surrounds the player character. Using Forces, which are actions set to the four face-buttons, will consume MP, and will also decrease not only an enemy’s health, but also their Break Limit, causing them to stagger and allowing you to deal more damage if depleted. It’s this core balance of trying to stagger enemies while maintaining your own character’s health that makes Shining Resonance Refrain’s moment-to-moment combat feels so fluid, but it’s the systems surrounding this that give it its added depth.

Each party member acting as a Dragoneer, they wield special musical instrument weapons called Armonics. In the heat of combat, you’re able to have your Dragoneers use the special B.A.N.D. session ability in which your party is gifted a temporary buff, which is designated by whichever character is assigned as the “center” of the session. Beyond this, you’re able to also customise character’s weapons by equipping specialized “aspects”, as well as individual character loadouts by changing their “tuning”. Yuma can also transform into the Shining Dragon mid-battle, which upgrades the further you go through the story, and allows for a massive damage output. However, it all comes at a cost: if Yuma’s MP drains too quickly, he’ll lose control and begin attacking the party, forcing them to either use a B.A.N.D. session to calm Yuma, or lose the encounter altogether. 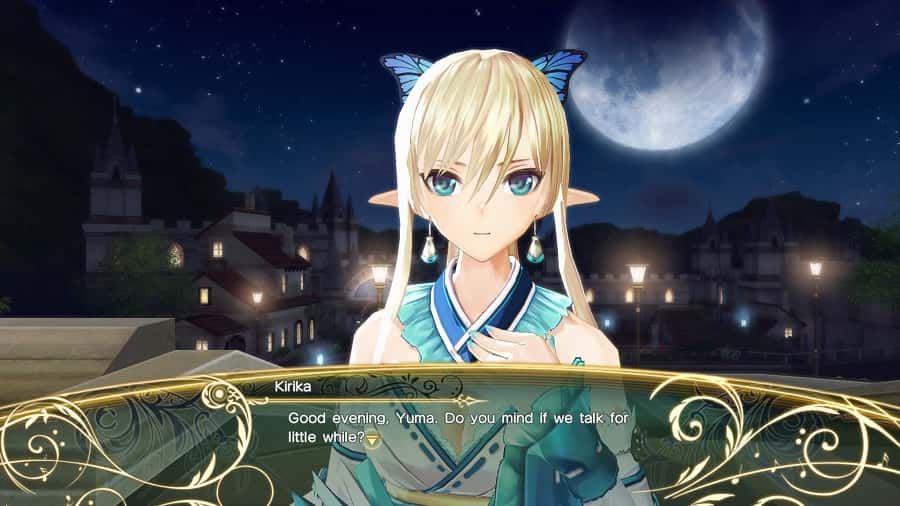 All of this comes together to create a battle system that constantly has you thinking on your feet. Whether you’re attacking enemies, building up your B.A.N.D. session meter to give your party an accuracy boost, or unleashing the power of the Shining Dragon, there’s always a way for you to be doing more at any given time. However, because there’s so much to do in Shining Resonance’s combat, it’s easy for information to get lost within all the chaos. Important information like an enemy’s break limit isn’t shown on screen, forcing you to simply guess at how far you have to go before you can stagger an enemy. Even worse is how easy it is to over-level in the game, forcing most of the game’s most interesting aspects to become rarely used abilities saved for only the toughest of boss encounters.

There’s also an unfortunate amount of backtracking and repetitiveness inherent to Shining Resonance’s exploration, since the game world is more or less a series of loosely connected areas sprouting in two directions on the world map. Starting in Magra, there are few locations that offer a true sense of exploration. The separate biomes of Alfheim help keep things interesting to a degree, but since the pace of the game has you returning to areas before advancing beyond them, you’ll be forced to run through the same location dozens of times. The only saving grace is that after a chapter ends, the enemies in any given area level up, helping the game keep pace with the player’s level. It doesn’t always work, as there were multiple times when I was already over-powering enemies at the start of a new story chapter, but there is a sense of progression that helps keep things in check.

There is, luckily, the option to explore the procedurally-generated dungeons of the grimoire. Although these too are mostly non-descript dungeons, usually only tied together through the dungeon’s elemental theme, they do offer areas that are constantly changing – in stark contrast to the static repetitiveness of the main game.

Besides the core main attraction, Shining Resonance Refrain also gives players the opportunity to play through the game in the new “Refrain” mode, which adds the previously unattainable characters Excella and Jinas. There’s also the added bonus of playing through the game with the original Japanese voices. Although I’m not one to often turn down a good dubbing, which Shining Resonance luckily does feature, because of how attached the original Japanese voices are to certain aspects of the game, like the B.A.N.D. sessions, it’s a feature that’s too good to pass up.

For someone like me who lost interest in the Shining series long ago, Shining Resonance Refrain is an absolute delight. Although it doesn’t resemble anything like the strategy RPGs and dungeon crawlers I first fell in love with back in the 90s, Shining Resonance Refrain is a charmingly sweet JRPG with an engaging combat system that hides hundreds of tricks up its sleeves. With a cast of characters I won’t soon forget, Yuma’s personal story of dealing with the Shining Dragon is a tale I’m glad to have been apart of – even if there are some missteps along the way.

Shining Resonance Refrain is available on PC, PS4, Xbox One and Nintendo Switch. We reviewed the Xbox One version.