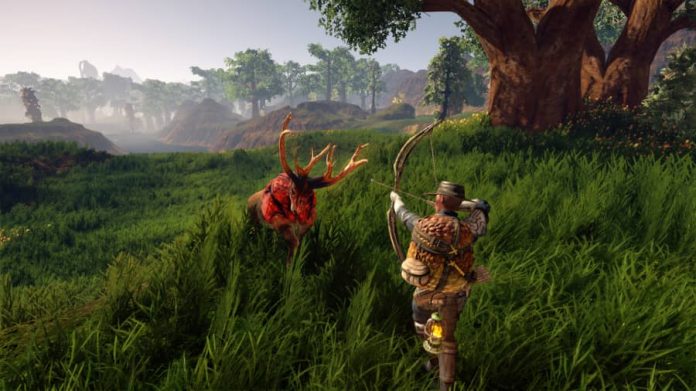 I love action RPGs, even when they’re a bit janky.

When it comes to Outward, though, as much as I try, I just can’t enjoy it. It feels like it’s always trying to fight me.

After creating a character that you assuredly won’t be happy with thanks to the lacklustre options on offer, Outward offers a level of freedom that other action RPGs seldom bother. Take the very first mission, for example: you’re tasked with earning 150 silver in five days to keep a roof over your head, or you can earn a favour. You’re not really told how you achieve either of those tasks, so you just go about looking for clues. In the end I opted to get the silver, some of which I obtained by pilfering anything that I could find that wasn’t nailed down and selling it at the numerous shops in town, and killing some animals in order to sell their skins. The bulk of the money, however, came from obtaining an item for a lady in town. It was dangerous work, but the risk was worth it.

While securing my property was the first step of my adventure though, it didn’t have to be. I could have just let the five days pass, losing my home in the process and the game would have carried on. In fact, fighting to keep my home was rather pointless, for as soon as the deed was done, it was pretty much time for me to leave the sleepy town I called home and head out on an adventure. Three possible avenues were open to me, and though it was hard to choose which one I should pursue, it had to be done. But it’s when you venture out into Outward‘s open world that its ugliness begins to show. And I’m not talking about the game’s visuals, even though they’re not particularly good on console. 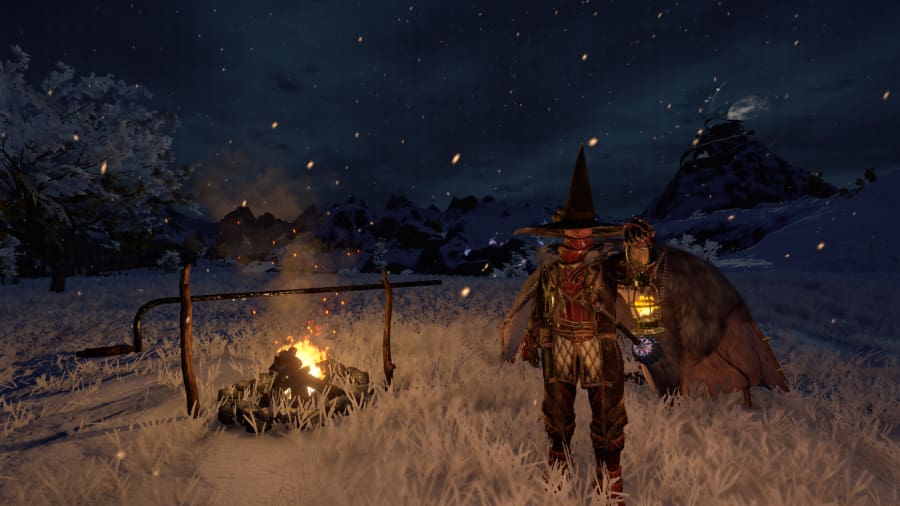 Outward is simply unfriendly to you. Unnecessarily so. You can’t see where you are on the game’s map, for example, leaving you to do some serious orienteering. That wouldn’t be so much of a problem by itself, but if you lose all your health, you’re scooped up and placed at a number of locations in the world with massively reduced health and stamina limits. For some reason you miraculously never die; you just get taken by bandits or monsters or a helpful stranger. Thankfully you’ll have all your items with you, but if you’ve not got any supplies with which to heal yourself or a safe place to sleep, carrying on your adventure can be quite a challenge. It’s something that’s less of a pain as you learn the game’s map, but in the early hours it can be really frustrating.

Even more frustrating are the game’s survival aspects. You need to keep yourself hydrated and nourished in Outward, and the weather also affects your wellbeing. Fail to look after your character properly and their maximum health and stamina levels will fall, leaving you at a disadvantage when facing anything that’s hostile in the world. Needless to say, if you get lost with limited supplies, you’re going to have a hard time. Especially when combined with the game’s no-death system. 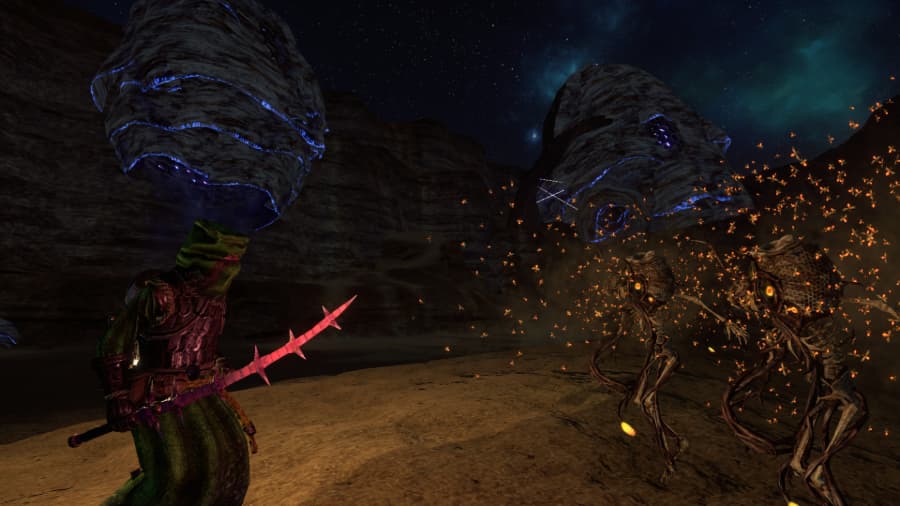 And another thing: Outward‘s combat isn’t very good. It just feels messy, with enemies largely refusing to flinch even when you’re introducing a mace to their face. When you’re capitalising on an opening they’ll hit through your attacks, making the only safe option to hit and run. Generally you can take on one foe without too much trouble, but when faced with multiple opponents you’re likely to be in for a world of hurt. And things generally always get worse when you move to a new area. I mean, fighting giant chickens is one thing, but coming up against dinosaurs is another.

Where possible, combat is best avoided – after all, there’s no experience to be earned, Outward has no level up system. Victory usually just means you can loot a corpse or two, but it’s rare that any valuable loot is obtained. There are times where combat is necessary though, and you’ll just have to hope you can muddle through it. It’s worse when you have to engage in multiple fights, one after the other. The only way to restore your health if you don’t happen to have any bandages or valuable healing potions is to sleep. You can do it pretty much anywhere, but it costs more resources to reduce your chances of being ambushed and repair your equipment.

I feel like I’m being too harsh on Outward, but it really does feel like it works against you at times. Its systems just don’t complement each other well, punishing you over and over again and sucking all the fun out the adventure. I’d be able to put up with the game’s poor combat if I also didn’t have to worry about my food and water requirements and could just save my game when I wanted, but Outward wants to make you live with your choices, and seemingly also wants to let you have little fun doing so. 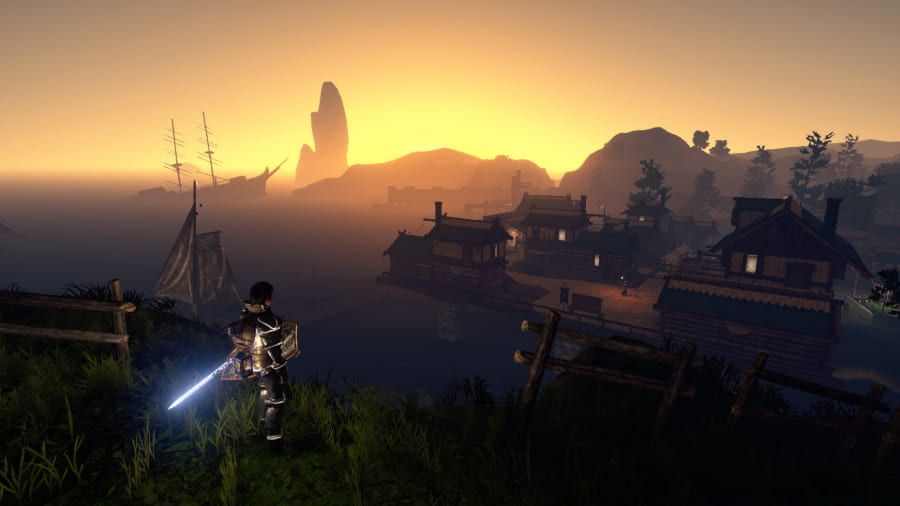 There are some that will undoubtedly revel in the challenge provided by Outward, and the level of openness that it provides. And indeed, once you’ve got some decent equipment and learned some skills the game does generally become a lot more manageable. But it takes a lot of patience to get to that point. Playing with a friend helps, I suppose, and you can do that thanks to split-screen and online co-op play. Needless to say, Outward isn’t a game without merit. It’s essentially a game in which preparation and caution is key, with those who do spend their time making sure they have the requisite supplies before heading into the hostile wilderness certainly finding themselves more capable of dealing with any situations that pop up. It’s questionable if many players will have the patience to commit to such preparations though.

At the end of the day, it’s undeniable that Outward‘s combat is sub-par, and that its systems prove to be very punishing when combined. Most who play Outward will find it very frustrating at first, then might come around to it a little when they understand it a little more and learn to avoid its pitfalls. As they progress further and find themselves treading backwards and forwards on the same old ground completing quests that just aren’t that interesting, however, they’re likely to grow bored of the whole experience and just give up.

Outward is available on PS4, Xbox One and PC. We reviewed the Xbox One version.