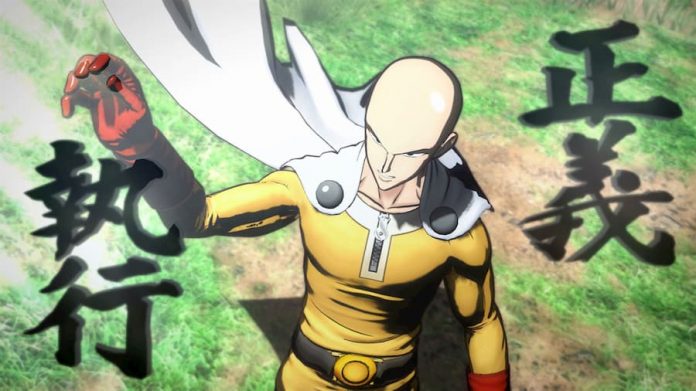 Let me tell you a story about Chad.

Chad always wanted to be a hero, and so just like that he became one. On Monday, February 2nd, ‘The Knobbler’ was born. Being new to the whole hero malarkey, however, he started at the bottom. As a “C” class hero, he couldn’t take on the powerful monsters that threatened the safety of his town. Nor could he comfortably rub shoulders with the “A” and “S” class heroes. But he did what he could. He helped people around town, carrying out errands for them and dealing with small fry like purse snatchers and the like. He built up his reputation as well as his strength. Eventually, the Hero Association just had to take notice of him. And you know what, he had potential. Lots of it.

Chad, or should I say The Knobbler, is in the big league now. As one of the most powerful heroes around, other heroes who once shunned him now want to fight alongside him. And no longer is he simply on evacuation duty if a major threat hits his town; he’s now the one sent in to eliminate the threat. People have confidence in him. He gets the job done. Needless to say, he’s changed a lot since his humble beginnings.

Chad’s story can be yours in One Punch Man: A Hero Nobody Knows. While its trailer and screenshots may have given you the impression it’s simply your standard anime fighting game, in truth, it’s more of a ‘make-your-own-hero’ action RPG.

After creating your new hero, One Punch Man: A Hero Nobody Knows throws you straight into a town that serves as a hub. You can freely explore it, but you’ll find that many areas are closed off, and as such, your options are limited. Once Lecture Man has got you up to speed with the basics of the game, however, you can start taking on missions and making a name for yourself. That, alongside improving your hero rank, is key to your progress in One Punch Man: A Hero Nobody Knows. 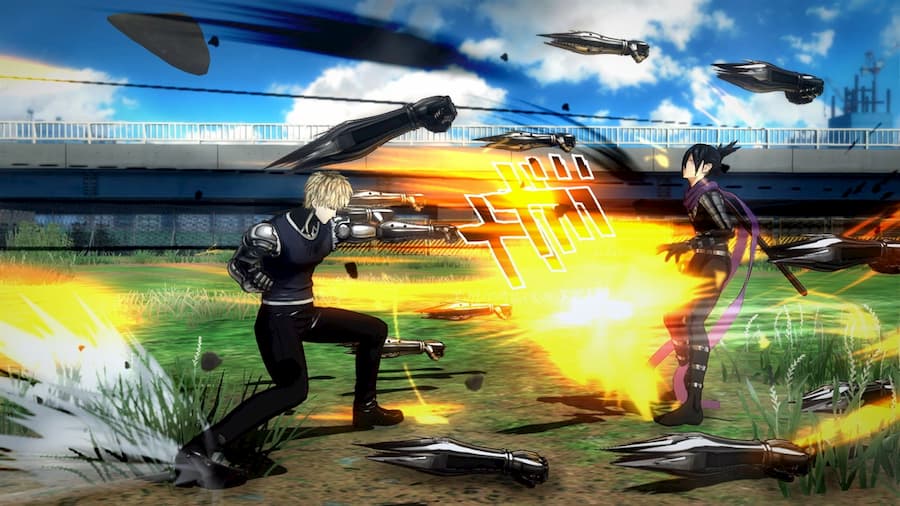 Initially, your options are limited in nearly every aspect. You’re limited as to how unique you can make your character, for example, you only have access to one fighting style and one “Killer Move”, and missions/quests are thin on the ground. But as you start being helpful, taking down monsters around the town and helping citizens, your combat abilities improve. Soon, the Hero Association will ask you directly to help with more pressing issues, many of which will open up new areas of the town for you to explore.

Over time, you unlock a clothing store where you can buy new threads, hairstyles, weapons, and even faces. A hero’s got to look the part, right? There’s also a bookstore where stat boosting skills can be purchased, an item shop that sells helpful consumables, and of course, your home. It’s a bit dingy when you start out, but as you start to become more famous and bring in more moolah than you could ever imagine, you can customise it so that you aren’t ashamed when your “S” class hero friends come around.

At the heart of your career as a hero is combat. While some quests that you take on while milling around town simply require you to carry out busywork – i.e. deliver an item to person a few streets away – others and pretty much all missions involve fisticuffs. Initially, you’ll be fighting pretty much alone. Every once in a while another hero might join your cause mid-fight, however, and as you progress further it’s rare that you’ll have to tackle a foe one-on-one. Mind you, you’ll find that monsters increasingly have backup too. 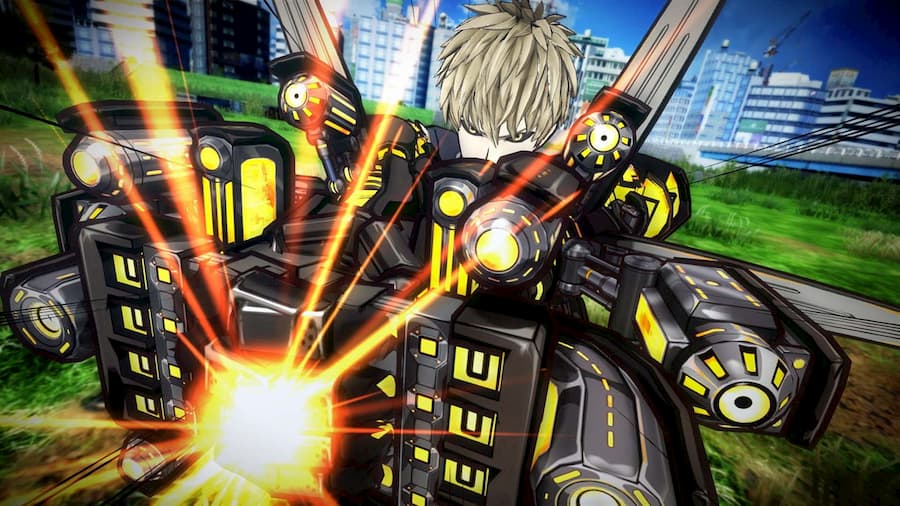 Combat is your typical anime affair. You have a standard attack button and a strong attack button, and they can both be held to perform more powerful charged attacks. Special moves are also available, and to access them you have to hold down the left trigger; a display then shows which Killer Move is assigned to each face button. You need to have enough charges in order to use Killer Moves, however. And of course, when you’re on defence, you can either block or evade your opponents’ attacks. Or even better still, perfectly time your block so you warp behind their backs, presenting you the perfect counterattack opportunity.

One Punch Man: A Hero Nobody Knows‘ combat isn’t the best, but it gets the job done. It doesn’t feel particularly deep, though you can string together some brilliant combos if you assign the right Killer Moves. Its main problem is that enemy attacks can be a bit sporadic at times, making it hard to gauge exactly how they’re going to act. One Punch Man: A Hero Nobody Knows also tries to spice things up by having random events occur during battles. There might be a meteor strike, or another monster in the area that decides to interfere; for the most part they add a bit of excitement, but sometimes you might be left wondering what just happened when you or your opponent’s health bar just suddenly depletes to nothing.

Ultimately, the core of One Punch Man: A Hero Nobody Knows – developing a character from zero to hero – is fun. It’ll take you a while to move through the ranks; at times it might feel a bit grindy, but a steady stream of unlockables and character development opportunities keep you sucked in. Eventually, you’ll have settled on a fighting style that suits you, found a palette of Killer Moves that allow you to stylishly slay your opponents, and increased your stats so high that only the strongest of opponents can even mark a mark on you.

That’s not all there is to One Punch Man: A Hero Nobody Knows though. There is the fighting game side to it as well, though you need to do a bit of legwork to access it. A trip to Hero Association HQ lets you partake in versus battles against friends, using characters you’ve unlocked by making your way through the game’s story. You can even take the action online if you wish, fighting against random opponents or inviting friends. There are even occasional events to take part in to earn goodies.

If you’re a fan of the anime, you’re probably wondering how Saitama, the titular One Punch Man is handled. The answer is yes, he’s invincible, and yes, he kills all opponents with simply once punch. The catch is, when playing in team battles he’ll always appear as the last member, and as always, he’s late. If your team is defeated before he arrives, that’s it; you lose. In battles where team members aren’t selected and they just appear willy-nilly, it’s the luck of the draw. If Saitama appears to fight by your side, just consider yourself lucky. 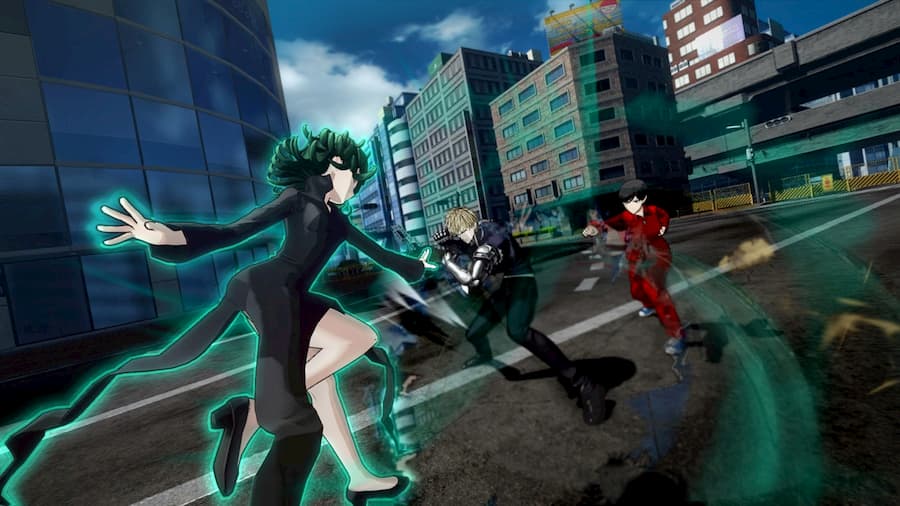 All in all, the only aspects that really drag One Punch Man: A Hero Nobody Knows down in my estimation are technical issues. The voice acting, for example, isn’t the best, but I can live with that. What I can’t stand, however, is how poor the recordings sound. It’s unpleasant on your ears. Also, the town that you explore is prone to frequent performance problems, even on an Xbox One X. And on top of that, people you need to talk to to start quests etc. sometimes don’t appear, leaving you hanging while they load in. The whole One Punch Man: A Hero Nobody Knows experience feels a little rough around the edges.

Even with its issues, One Punch Man: A Hero Nobody Knows is likely to be a pleasant surprise for those who were expecting the worst, or even just a bog-standard anime brawler. It’s a single-player game at heart; a lengthy action RPG experience with multiplayer offerings serving as both a diversion and reward for your efforts. You’re never going to be amazed by it – it’s pretty by-the-numbers – but you are going to be engrossed as you turn your wimpy wannabe hero into a saviour admired by all.

One Punch Man: A Hero Nobody Knows is available on PS4, Xbox One and PC. We reviewed the Xbox One version.

Want to support GameSpew? Buy One Punch Man: A Hero Nobody Knows using our Amazon affiliate link. It won’t cost you anything extra, but we’ll get a small slice of the purchase.